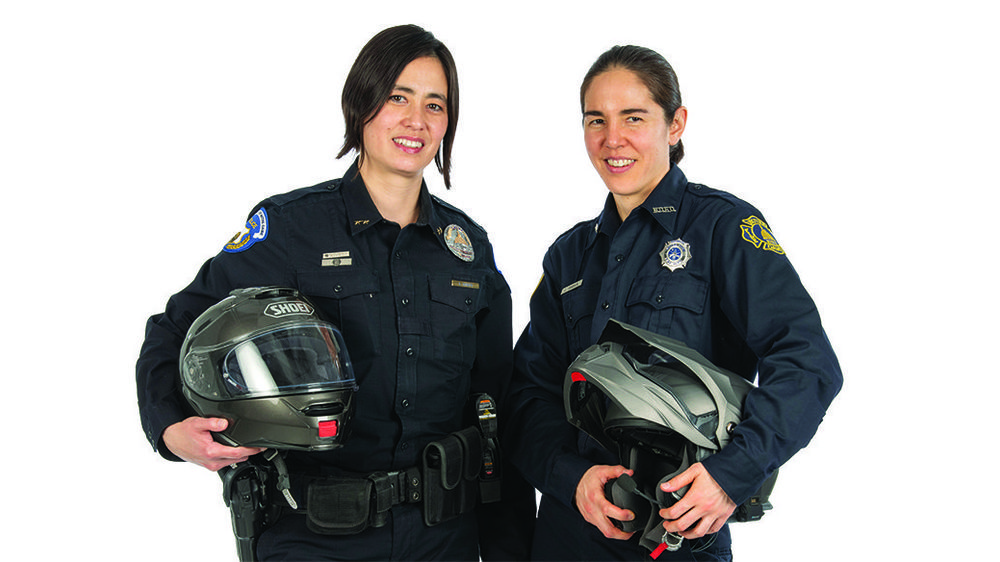 Growing up, sisters Keri Kei and Christi Shibata had different ideas about what they wanted to do. Their father was a Michigan state trooper and their mother was a teacher.

“I grew up not wanting to be either, but ended up kind of both,” says Notre Dame Police Chief Keri Kei Shibata.

Notre Dame Firefighter Christi Shibata always had a pull to help people, but did not know exactly how she wanted to do it. She recalls that when the family would pass a broken-down car on the road, her instinct was to ask her father if they could pull over to help.

The sisters grew up in Harbor Springs, Michigan, and they both were in athletic programs in high school, playing basketball and participating in track. Being just three years apart in age meant that by Keri Kei’s senior year, Christi was on the same teams. Combining their abilities, they took the teams further in their quarterfinals than the teams had gone in years past.

Christi earned her undergraduate degree from Kent State, where she continued to play basketball.

Keri Kei, who majored in biblical literature at Bethel University (then Bethel College), opted out of college sports.

“I had a knee and back injury that didn’t allow me to continue, which actually, I’m really glad of. Christi enjoyed her experience, but I saw that her entire life was consumed with basketball, and I got to do other things and have a different college experience.”

Keri Kei later discovered roller derby as an adult while visiting Seattle with her husband, and joined the local South Bend roller derby chapter. For a time she was known as “Keri Khaos.”

Keri Kei came to Notre Dame in 2004 when the University began its residence hall patrol program, and by 2005 she was a campus police officer.

After initially working as a youth pastor, she became a substitute teacher with the South Bend school district, residence hall director at Bethel, and worked in security and admissions before combining her experiences into her work at Notre Dame.

“I look at it as a different kind of ministry. It’s different than firefighting, but still helping people when they are in crisis,” Keri Kei says.

Christi is newer to campus, becoming one of Notre Dame’s first women firefighters in July 2019.

Becoming a firefighter also came from a combination of skills and a desire to help.

“I was a physical therapist assistant as a career before this, and I enjoyed the aspect of helping people but was going a little stir-crazy in the clinic. I wanted a little bit more action and to use my athletic abilities. I always wanted to be one of those people on the front lines,” Christi says.

While both of the sisters were familiar with Notre Dame, their first experiences on campus were very different.

Christi’s was as a graduate student after she was accepted into the architecture master’s program at Notre Dame.

“We basically lived in our studio, because as architecture students, that’s what you do,” Christi says.

She took a leave of absence from the program during a medical event, and that steered her back toward wishing to be on the front lines. She graduated from the Clay Township Fire Academy in 2019.

“It was a bit of a culture shock, especially (because) Bethel is a dry campus. They, in fact, make you sign a lifestyle covenant when you go to school there that you’re not allowed to drink or dance, or like all these things you’re not supposed to do,” she says.

Because of that, she was not exposed to many intoxicated individuals.

“When I came here and was released on my own one of the first nights of school, in 2004, to see and interact with intoxicated people was a very different experience.”

Keri Kei emphasizes the similarity between Bethel University and Notre Dame, however, in that the tight-knit community and family environment is very supportive. Christi agrees.

The sisters’ lives, back on the same team as neighboring first-responder departments, don’t intersect very often on campus.

“I think I’ve answered the phone twice at the firehouse and it’s been Keri Kei for Chief [Bruce Harrison], but other than that, we never see each other,” says Christi.

“I’m not out on calls a lot, unless it’s something pretty big,” Keri Kei confirms of her life as police chief.

To make up for that, the sisters, along with Keri Kei’s husband, take to the road when they’re seeking time together and to relax.

“We have four motorcycles,” says Keri Kei. “Two smaller ones that you can go both on and off road, Suzuki DR650s, and two Ducati Multistradas we just got last spring break. They’re larger so you can take longer trips and ride on bigger roads.”

Taking the backroads and being in nature, while also focusing on the road and their surroundings, helps to calm both of them — though as Christi says, “I like speed.”

“You have to be very in tune and aware of everything going on. You can’t be thinking about anything else. You can’t be distracted,” Keri Kei says. “I think it’s very zen-like.”