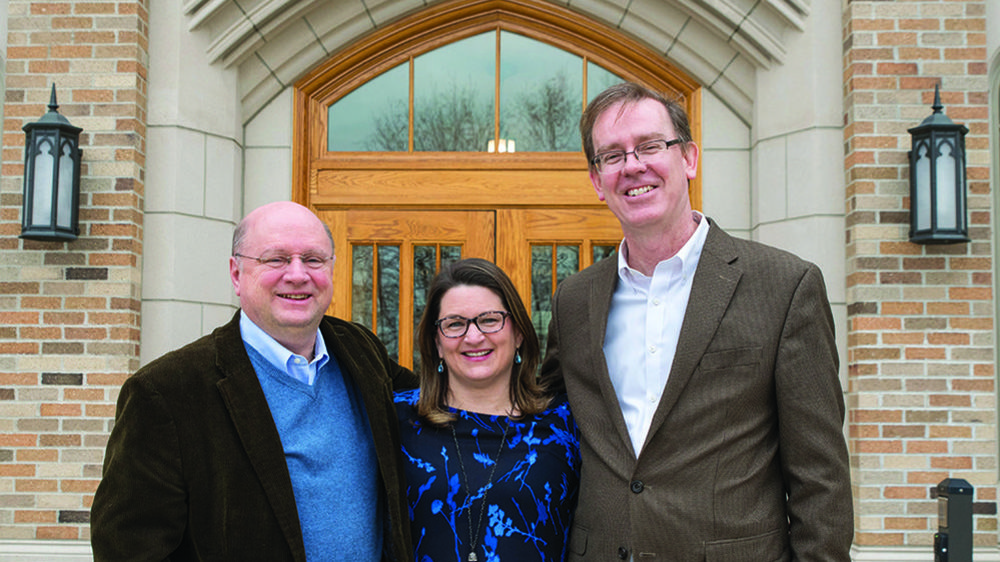 Scott Appleby, dean of the Keough School of Global Affairs, is convinced that his sister, Angie Appleby Purcell, finds it especially amusing when people on campus tell her they just met her father.

The two are the oldest and youngest, respectively, of six siblings from Shreveport, Louisiana — and they’re only 13 years apart.

Growing up in Shreveport, Scott says, most of his classmates went on to Louisiana State University. “But I had a basic image of Notre Dame and decided to take the risk of applying.” A tender memory, he adds, is of his normally undemonstrative father leaping from his chair when Scott received his acceptance letter — and a scholarship — to Notre Dame.

He was the first of what has become an extended family of Notre Dame and Saint Mary’s graduates. “And none of us would be here without that scholarship,” he adds.

After graduating from Notre Dame in 1978, Scott completed master’s and Ph.D. degrees in history from the University of Chicago. He came back to Notre Dame in 1994 as a professor of American religious history and director of the Cushwa Center for the Study American Catholicism, then served as the Regan Director of the Kroc Institute for International Peace Studies from 2000 to 2014. In 2014 he was named Marilyn Keough Dean of the new Keough School of Global Affairs.

Youngest sister Angie, associate director for strategic initiatives and special projects for Notre Dame International and interim director of the Jerusalem Global Gateway at Tantur, is a 1991 graduate of Saint Mary’s College and received her master of divinity degree from Notre Dame in 1997. She met Bill Purcell when both were leaders of a Campus Ministry weekend retreat.

Bill, from Buffalo, New York, is the seventh of seven children and senior associate director for Catholic social tradition at the Center for Social Concerns. He completed his undergraduate degree at Notre Dame in 1986 and M.Div. in 1992. Rev. Don McNeill, C.S.C., and Rev. Bill Lies, C.S.C., Angie notes, presided at their wedding. Bill and Angie returned to Notre Dame as a family in 2005.

Of Scott and Angie’s siblings, Kevin ’84 is another ND graduate, while sister Amy is another Saint Mary’s College graduate (’88). Their other siblings are Tim (University of Iowa) and Julie (Boston College). Scott has four children, Ben, Paul ’05 (a well-known operatic tenor), Claire ’07 and Tony. He is also the grandfather of four, with another two on the way.

The Purcells have three children, John, Joseph (a Notre Dame senior) and Olivia. Angie and Scott’s mother, Joanne Appleby, will be making the trip from St. Louis to South Bend in the spring for the 2019 graduations of her grandchildren, Bill and Angie’s son Joseph and his
cousin Allison, daughter of Scott and Angie’s sister Amy.