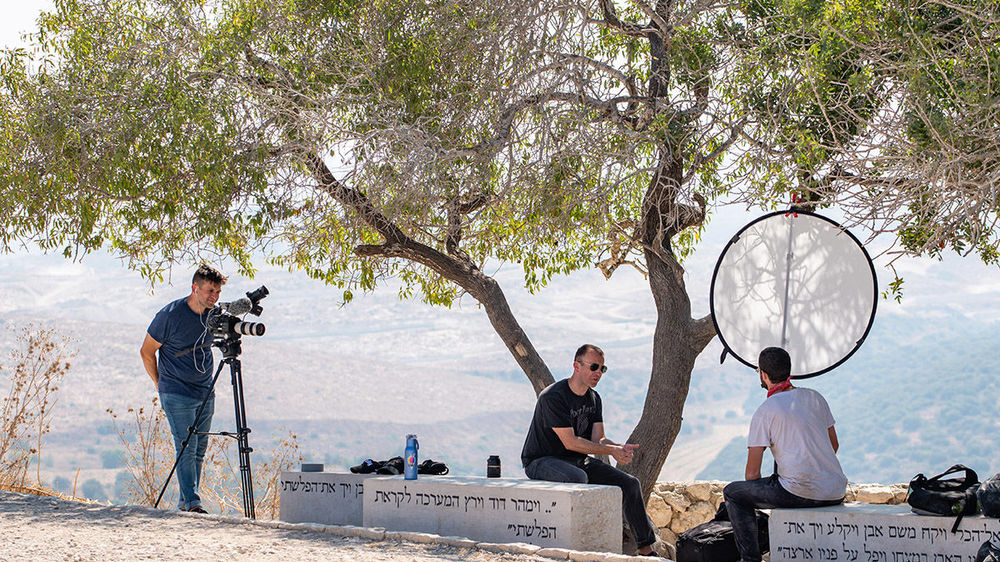 When talking to anyone who knows the Fuller brothers, Anthony “Tony” and Andrew “Andy” Fuller, you find out two things very quickly. They are very much alike, yet very different. With a four-year age difference (Tony is older), one might think they wouldn’t be very close. Nothing could be further from the truth. They are very close, and very talented.

Andy is the director of Strategic Content, or “the University’s storytellers” as he would describe it. “We try to bring stories to life in the most compelling way possible, often using multimedia,” he says.

And this is where big brother Tony comes in. A senior videographer in multimedia under Marketing Communications, he too is a storyteller —through the lens of the camera. For the past 11 years he has been capturing video —the “gathering of the story” —shooting interviews, editing and packaging. During Andy’s seven years at ND, the two have worked together on more than 25 projects, most recently visiting Israel for “Hill in the Holy Land,”a compilation of podcasts, videos and photographs telling the story of Notre Dame’s presence in Jerusalem.

Growing up in Angola, Indiana, as “PKs” (preacher’s kids), the Fuller boys are the only children of Norm, a Missionary Church minister, and his wife, Linda, a secretary at a nursing home. The age difference may be why the boys never got into major fights or disagreements growing up. (There was, however, the time Tony pretended to be Andy on the phone with Andy’s girlfriend. But that’s another story for another day.)

But the age difference wasn’t so big that they couldn’t hang out. The two played a lot of pickup basketball, whether in their driveway at home or in the church gym. Tony looked out for his little brother, as an older brother might do. And this wasn’t lost on Andy.

“Tony would always include me in whatever the cool guys were doing. I was in junior high and he was in high school and I wanted to hang out with those guys. And Tony would include me in that.”

The closeness remained through Andy’s college years with visits and phone calls home, if only to talk about the NBA. This closeness may have led the two to follow in each other’s footsteps rather than their father’s.

Although neither Fuller boy was drawn to the church ministry, they were definitely influenced by their father’s other interests. Tony recalls that their father often had the news on, the one thing that may have attracted them to the media.

“I don't know why exactly. I don't know why he was always drawn to that,” says Tony. “Maybe he just always wanted to be informed on what's going on in the world, for whatever reason.”

Tony first put his skills to work behind the camera in high school, recording and producing a video yearbook on VHS. “That was probably my first video work, where I did something that actually made it onto somebody’s screen.” He went on to Bethel College (now Bethel University) where he majored in communications. There, he deejayed for the campus radio, having his own radio show.

His first shooting job was in Lafayette, Indiana. He would go on to work for WSBT in South Bend, and then do a stint at an Indianapolis television station, for a total of 10 years in TV before landing at Notre Dame.

Andy used his voice and writing skills in high school as well, doing public address for basketball games in the gym. As a writer, he was drawn to the “piecing together” of the news. As he explains, “How do you say what it is that people need to know? How do you order it? How do you put thoughts together? How does information become clear, and then once you get that nailed down, how do you put some artistry to it as well?”

When Andy followed Tony to Bethel, he would again do public address at basketball games. Those early roots sprouted to an internship at WSBT where Tony was also working. The two didn’t work together per se, but were in the same building, pursuing their individual career interests in media.

Andy picked up a full-time anchor gig fresh out of college. He anchored for a few years, including at WLFI in Lafayette, where Tony had previously worked. He then moved into politics doing more traditional public relations. When he landed at Notre Dame, it would be the third place the brothers had worked at together. It wasn’t planned; it just worked out that way.

The two have traveled domestically and internationally for Notre Dame. February 2018 found them in McAllen, Texas, interviewing Sister Norma Pimentel, M.J., the 2018 Laetare medalist. The sister worked with people seeking asylum from Mexico. Later in October of the same year, the two were in Rome together.

As one might expect, there is a benefit to traveling with your brother. On a flight back to the States from Tel Aviv, Andy had the kind of upset stomach that could lead to multiple “get-ups,” as he describes it. “I was like, man, I just hope whoever’s next to me on this flight is understanding. And then Tony came to the row I was in and said, ‘Oh, you’re here.’ He was right next to me. So now I don’t care if I’m getting up and down.”

For Tony, traveling and working with your brother means you are going to get the same feelings about experiences on the trip. “I think we know what each other’s level of significance is for those types of sites. It’s cool knowing that the person you’re with is getting as much out of the experience as you are.”Working with a sibling could also lend itself to a shorthand of sorts, an unspoken communication. Andy admits it’s a possibility —but he mostly attributes the clairvoyance between him and Tony to Tony being such a good videographer. “I don’t have to point things out to him. I can just look over and he’ll see the shot before me most of the time. I’m like, ‘OK, good.”

Even though they didn’t follow their father’s footsteps professionally, they were able to walk in his footsteps in the Holy Land, as he had visited there years earlier. The visits to Rome and Jerusalem were particularly moving for the brothers.

“Growing up in a pastor’s household, you hear about the Crucifixion and Resurrection as something that happened a world away, and then you walk into the Church of the Holy Sepulchre and you’re right where it took place,” says Andy.

Tony is quick to pick up where Andy leaves off, remarking on being in the place of the Nativity. “This was what we had heard about growing up, our whole life, and to finally get to go there and see it —I wasn’t sure I’d ever get to any of these places. It was surreal.”

From shooting hoops in the driveway of their childhood home to shooting videos across the world, the brothers followed a shared passion, both storytellers in their own right. Their work and life experiences brought them full circle, from what they learned and loved growing up.

This past September, they gifted their father with a very special birthday present —a picture of both of them in the Holy Land. “He was really appreciative,” says Tony, “to know that his boys were doing something like this, and in a very significant place.”