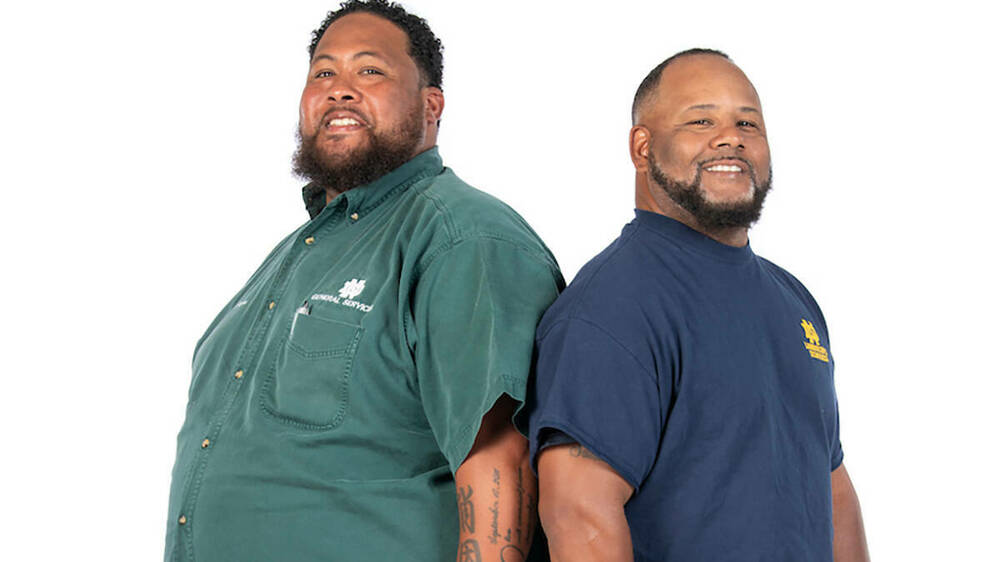 A family reunion (of sorts) happens every day for Notre Dame employees and brothers Terron Phillips and Shawn Thomas. Phillips is a crew leader in Landscape Services and Thomas is a field coordinator in General Services. While the two sometimes run into each other on campus while executing their respective jobs, they rarely miss having lunch together.

In addition to lunching together, and the occasional chance meetings on campus, the brothers often spend time away from work together. What do they like to do? “I like watching my Colts beat up on his Cowboys,” said Thomas, without any argument from Phillips.

“The biggest thing is our family gatherings,” said Phillips. “That’s what we look forward to on our off time. We give a phone call — ‘Let’s get together this weekend’ — it doesn’t have to be a cookout; just show up. Family is so important.”

As a crew leader, Phillips checks in daily with his co-workers to see if there’s anything they need or any way he can help them before he attends to his own tasks. The landscape crew provides upgrades and upkeep to different areas on campus. Teams have varying shifts and hours depending on the seasons, providing nearly 24 hours of coverage for the campus.

Thomas, as a field coordinator, makes sure his team has the necessary tools and assistance in the field, including operating a forklift when needed. General Services coordinates several services such as delivering equipment, setting up tables and chairs and assisting with office moves. “We handle any type of material,” said Thomas.

Thomas and his team supported the various stages of the University’s response to the pandemic, from moving items out of students’ rooms to be shipped to them in the spring of 2020, to helping set up the COVID-19 surveillance and diagnostic testing sites. “We all came together to get one common thing done to make the campus safer, and it was all for the greater good. We were all on top of it — it was a great team effort.”

The brothers’ employment was preceded and encouraged by their father, Robert “T” Thomas, a Notre Dame employee for nearly 30 years. He is well-remembered and well-regarded by many, including Mike Danch, retired associate athletic director. The senior Thomas worked in Athletics as an assistant manager for the stadium and grounds. “Many coaches and athletes befriended Robert over the years and appreciated his good work in helping get their facilities prepared for practice and competition,” said Danch.

Their father worked with the football team during the Lou Holtz era. Phillips recalls the opportunity he had as a child to travel with the team, getting to know the players and coaches.

“We’ve been a Notre Dame family ever since we were young,” said Phillips. Watching his father and how he interacted with different people led to a goal Phillips set for himself. “They loved him, and that was my goal — to be the same way. And so far, so good. My goal has been to follow in his footsteps.”

And for Thomas, working at Notre Dame is a wish fulfilled. “I always wanted to be here, seeing my dad here and seeing my brother here. I always told myself, if I didn’t go to college, I wanted to work at Notre Dame, and here I am.”

The benefits of being part of the Notre Dame family didn’t stop with the brothers. Phillips took advantage of the educational benefit available to employees, allowing him to send his children to college. “This has been a blessing to me because I have seven children, and Notre Dame has paid college tuition for six of them. That benefit was huge for me.”

Like their father, both brothers say the best part of working at Notre Dame has been their interaction with people. Thomas also enjoys the results of his labor, noting that “the stuff that we do puts smiles on people’s faces.”

In 2017, Phillips had the opportunity to combine his passions for people and landscaping through the creation of Helen’s Garden, a flower bed near the entrance of Jenkins Hall. Following the death of Helen Condon Jenkins, mother of University president Rev. John I. Jenkins, C.S.C., Phillips approached Father Jenkins with the idea of installing a memorial garden in her honor. Father Jenkins was touched and approved the idea.

“I know how it feels to lose a mom,” Phillips said. He was 13 when he lost his mother. While Phillips and Thomas share a father, they have different mothers, and Thomas’s mother took him in “with no hesitation,” as Phillips describes it.

“After building a relationship with Father Jenkins, and getting to know him, the man is awesome,” said Terron. “Notre Dame is a place of family.”