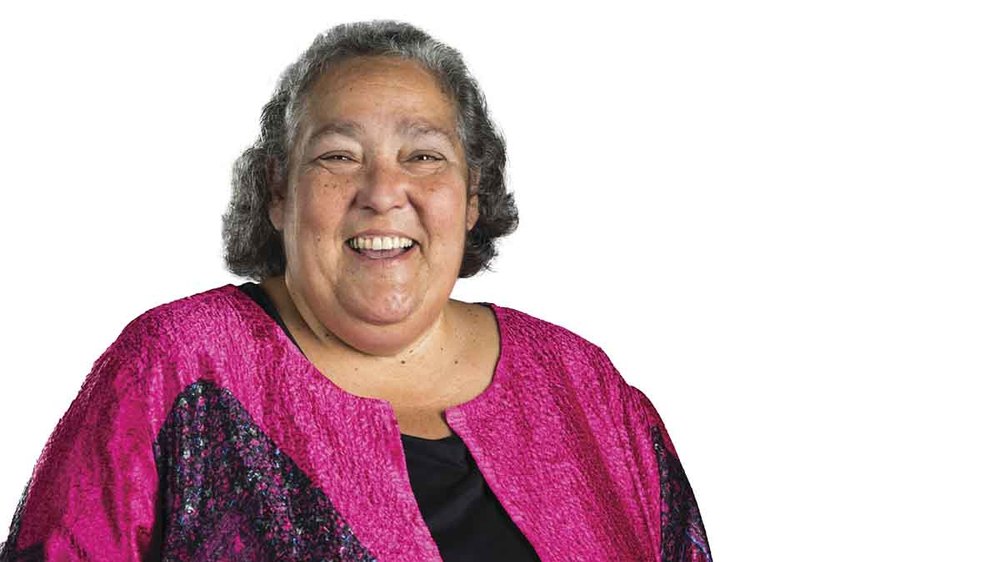 Cyndi Belmarez, institutional research specialist in the Office of Institutional Research, has worked at Notre Dame for more than 30 years. She likes to say that she grew up on campus.

“In high school I was approached by a counselor about Notre Dame’s Upward Bound program,” she says.

The Upward Bound/TRiO program (ntrda.me/upwardbound), launched in 1966 by Rev. Theodore Hesburgh, C.S.C., is one of the oldest and most successful college preparatory programs of its kind in the nation. The program offers intensive academic support and exposure to the college experience to South Bend high school students.

Cyndi applied to the program and was accepted. “I lived on campus during the summers, and on Saturdays we were here for tutoring and lunch at the Oak Room in the South Dining Hall — I fell in love with the Oak Room. Even after college I worked as an Upward Bound staff member in the summers.”

She graduated from South Bend’s Washington High School and started college at IU Bloomington, but returned to South Bend when her father became ill. She finished her education at IU South Bend, then took a job at Notre Dame as administrative assistant to the executive assistant to Rev. Edward “Monk” Malloy, C.S.C., later moving to her current position in Institutional Research.

In her job in Institutional Research, Cyndi writes code to analyze data. She submits University data to government agencies and to publishers such as U.S. News & World Report and the American Association of University Professors survey. She also coordinates course instructor feedback for the Provost’s Office.

Cyndi grew up in Crumstown, an unincorporated community on the far west side of St. Joseph County. “I was born independent,” she says. “I came seven weeks early, and weighed four pounds. Father Forester from St. Mary of the Assumption baptized me and give me last rites. But he didn’t give up. He stayed with me for 24 hours, talking and praying with his hand on me, when the doctors had told my parents to give up.”

Her father was from Mission, Texas, and always said their family heritage was Maya. “I’d rather be Aztec,” Cyndi says. “They were warriors, not farmers.” Her mother’s heritage was Dutch, Irish and Indian, and her siblings inherited her fair skin and blond hair. Cyndi got her darker skin and brown eyes from her father. There was rampant prejudice against Hispanics at the time, she remembers.

But although ugly things happened, she says, “What I think of is playing in the creek, and walking in the cornfields with my dogs. I liked to climb. We invented a game called High Road/Low Road, where we chased each other through the woods. I took the high road and had to jump from branch to branch without touching the ground.”

And she liked heights. “Once I climbed the neighbor’s silo. It was awesome. I was in seventh heaven. It was wonderful to see the patchwork of the land. Then I saw my dad and a neighbor coming. And then a firetruck. I shimmied down to see what was going on, where was the fire? ‘They’re here to get you down,’ Dad said.”

The firemen arrived again when she climbed a neighbor’s roof. “Cyndi, get down. You’re scaring the neighbors,” they told her. She also climbed the roof of the firehouse, but didn’t do that again — she didn’t want to embarrass the firemen, and there was nothing much to see from up there anyway, she says. “After a while, if they got a report of a child up high, they didn’t send the firetruck, someone just drove down with a bullhorn.”

After raising two nieces, Cyndi today lives with her 13-year-old cat, Walker, who’s black with white socks and bib. Of course, he was a rescue.

“I found him on a cold, sleeting night under a car. He was crawling with fleas and near death,” she said.  After a bath he needed an IV of iron, a blood transfusion and more than a week at the vet, he’d lost so much blood from flea bites.

Cyndi is a weather geek — she’s always watching the Weather Channel — and a football lover, watching college and NFL games and Canadian football in the off-season. She’s also a Jeep enthusiast, specifically the Jeep Wrangler. Jeep aficionados have a secret signal, she says: two fingers raised like a peace sign when they pass each other on the road. And she loves motorcycles, and drove her first Harley at age 12. She’s always loved the feel of the wind in her face. “When I was little, I’d take a sheet from my parent’s bed, tie an end to each ankle, hold the other ends in each hand and throw myself into the wind.”

Although she swore she’d never get a tattoo, she did get one at age 50. It’s a small heart encircling the number 274, the badge number of her 45-year-old brother, South Bend Fire Department Station No. 9’s Capt. Paul Belmarez, who died in 2005 of a heart attack.

“I love working here,” Cyndi says. “I like that you can display your religion — I can be Catholic here. I like that Notre Dame is so responsive to emergencies and crises. On 9/11 they had a Mass for thousands by 3 p.m. that day. And it meant so much to have Mass with those who’d experienced it with us. It helped us over the trauma and fear. We weren’t directly affected, but we were affected nonetheless, and they understood our spiritual needs. It’s not the way a corporation would do it. Notre Dame cares, whether you’re student, staff or faculty.”

Originally published by Carol Bradley at news.nd.edu on October 25, 2018.