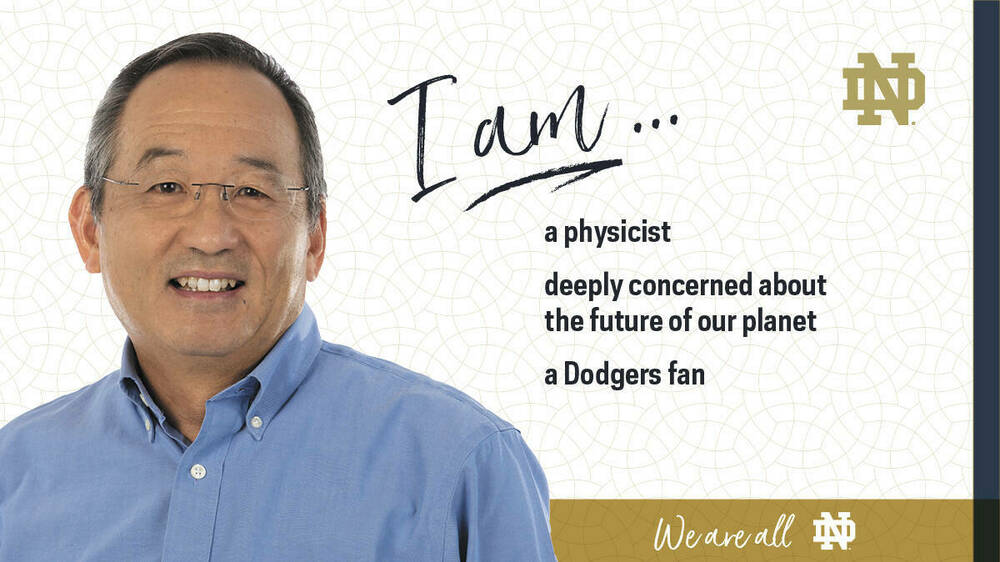 Has he been busier than usual?

“Overwhelmingly busy!” reports Phil Sakimoto, an astrophysicist and former head of NASA’s Space Science Education and Public Outreach program who came to Notre Dame in 2005. Sakimoto has had various roles on campus, but was recently named director of the Minor in Sustainability in the College of Science.

Sakimoto taught the introductory course on sustainability every spring even while directing the Program in Academic Excellence in the University’s First Year of Studies program. He’ll continue to do so next spring, but for now, he has plenty to do building and promoting the sustainability program.

Paraphrasing industrial ecologist John Ehrenfeld, Sakimoto describes sustainability as living in a way that will allow humans and other life to flourish on Earth forever. Students studying sustainability at Notre Dame represent more than 30 different majors, but interest is particularly strong among architecture and business majors. Students interested in sustainability may choose among courses offered by a variety of academic disciplines.

“We’re a minor, not a department, and we’re currently a staff of two,” says Sakimoto, hinting at some of the challenges he’s facing. “Part of my job is to be in touch with faculty members in different departments who are engaged in research and teaching that relates to sustainability. We want to increase the number of courses offered under our sustainability minor. We want undergraduates with sustainability minors to leave here with expertise in their majors, but also with a sense of how they can use that expertise to address sustainability issues.”

Students have embraced the need for sustainable approaches in the real world. That can be clearly seen in student capstone projects that seniors with sustainability minors are undertaking. One engineering student from Puerto Rico, Sakimoto reports, is proposing to design a system to protect solar panels from hurricanes in her country. Puerto Rico is particularly vulnerable to hurricanes and nation-wide power outages. It’s the kind of practical problem-solving for climate issues that Sakimoto hopes to engender throughout the University.

Off campus, Sakimoto is as busy as he is on campus. He is particularly focused on discussing and addressing climate issues with Catholics — parish groups, gatherings of diocesan priests, communities of women religious.

“If I feel stress about all of this,” he admitted, “it comes from asking how we can get a broad section of the public to understand just how urgent the problem is. That’s happening and that’s good, but it is still coming way too slowly.”

His concerns about climate change took root years ago in an accidental way. He tore his Achilles tendon badly while playing tennis and had to deal with surgery and a long recovery. During his time at home, he caught up with many science journal articles addressing the climate crisis.

What he read from fellow scientists scared him. He realized that global warming was rapidly becoming a deadly crisis. He’d known about global warming since his student days at Pomona College and UCLA. “But as a physicist, I could just look at this now — at what I was reading — and see that our global climate system was on the verge of collapse.” So he decided to use the skills he honed at NASA communicating complicated science to the public to accomplish a new goal: Educate people about climate change.

The astrophysicist credits his dad with teaching him about problem-solving and how things work best. Jimmy Sakimoto was an auto mechanic and decorated World War II vet who owned a busy Chevron gas station in Los Angeles.

“My brother and I worked for Dad in his gas station, and we learned from him: ‘Whatever it is, you get it done!’” Work days were long days, and the Sakimotos did a lot of repair work on cars in the back of the shop. “The goal was to have repair work done by the end of the day. Most of the time, we did.

“My father also advised his customers to take care of their cars on an ongoing basis. He’d remind them to have oil changed frequently, promising that if they did all necessary maintenance, they’d never need to have their cars towed. And,” laughs Sakimoto, “he refused to own a tow truck.”

Much like his father looked at cars and upkeep, Sakimoto sees that Earth needs ongoing global maintenance and care. “The climate crisis is an entirely preventable problem. We know what we need to do to prevent this deepening crisis.”

So, for the foreseeable future, Sakimoto is working hard at Notre Dame to help others address the climate crisis. And, echoing a lesson learned long ago at a Chevron gas station in Los Angeles, he’s urging others to get their work done by the end of the day. No time to lose.