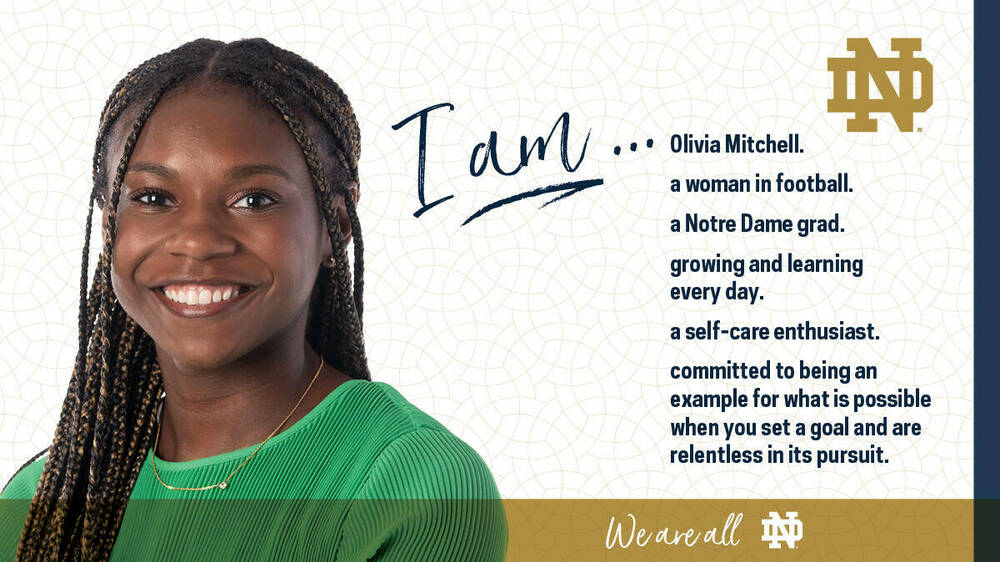 Olivia Mitchell is the “human Google” when it comes to all things Notre Dame football. If someone has a question about the program, she has an answer or knows who has the answer. And if you’re watching either a home or an away game, she’s had her hand in it. Mitchell is in her third year as the director of operations for the Notre Dame football program. This means coordinating a variety of administrative details from top to bottom: preseason camps, practice arrangements, summer camps, team travel and the annual coaches’ clinic — just to lightly touch on her responsibilities. She also supervises an operations staff and student workers.

Managing operations involves great attention to detail. A typical day during the season means a plethora of meetings preparing for the game ahead. The players start the day as early as 6:15 a.m. and wrap up at 7:45 p.m. Mitchell manages a calendar that, long term, includes projecting games a few years out and in the short term involves making sure the team is loaded on a bus and ready to go.

“Schedules are very, very detailed — whether that’s a hotel schedule or a bus schedule, the schedule for the team is down to the minute,” she said. “That’s one thing that I had to adjust to when I first came into football operations. You don’t round up or down. If the time is 3:15, it’s 3:15 — on the dot.”

Football operations is responsible for all the materials that point players, coaches and staff to where they need to be, from plane seating assignments to the time they need to be at the hotel. It means flying out to away game sites prior to the game to work with the hotel. It’s about taking care of a group of 170 to 250 people.

“It comes down to if you miss one small detail, it can throw off the entire operation,” Mitchell said. “We need to achieve success on Saturday at the game. We are working to make sure that everybody’s goals come together whether we’re on the road or at home.”

Mitchell’s journey to football operations started in Chicago, well before the 2016 graduate began coursework at Notre Dame in the Mendoza College of Business. A high school cheerleader for four years, she loved all sports but zeroed in on football. Her father, a Notre Dame and Chicago Bears superfan, helped feed that love for football.

“We would sit in our game room on Saturdays and watch Notre Dame, and the Bears on Sundays, and I’d learn more about the game from him,” she said.

There was one football show, “The Game,” that opened her eyes to what would become her future.

“There was a female character on that show who was an agent for football players,” Mitchell said. “And I saw her presence, how her character commanded the room and worked in that space traditionally for men. I thought, if she can do it, I can do it. That’s how I learned football was an option for a career.”

A visit to the University sealed the deal. “Once I got on campus, I realized that it fit me so well — knowing not only that I wanted to go into football, but the rigorous academics as well. I always expect excellence from myself.”

Mitchell immersed herself in the world of Notre Dame football from the very beginning of her college career. As a first-year student, she took the initiative to email several people in the Athletics Department. Her first response was from the football office. She began an internship as a football recruiting assistant, a position she held for four years. She also supported the team as a cheerleader during years two through four (students couldn’t be cheerleaders in their first year).

Mitchell’s marketing degree added to her success. In her current role, she draws on experience gained in group projects where she and her classmates learned to work toward a specific business goal.

“I think in operations specifically, it’s about working with a team and working with different departments. No matter what department is in our building, you have to have great connections and great communication. I think Mendoza does a really good job of putting you in situations where you learn how to do that, with so many different people,” Mitchell said.

Her ascent after graduation began with coordinator of operations, followed by assistant director of football operations for two years before becoming the director.

Working within the football program has never been an issue for Mitchell. She is always met with respect from the players, coaches and staff. “I think it is interesting for people to see someone who looks like me in my position. They aren’t used to it at all. So, I introduce myself with my title so they know that it’s time to go. We have to get it done and I’m the person that needs you to get it done,” Mitchell said.

This isn’t always the case outside of the football program, as Mitchell works with outside vendors such as hotels and bus companies. Her method for dealing with resistance is to “kill them with kindness,” a strategy she also learned in her days at Mendoza.

“It’s making sure that you build those relationships first. That you exude that confidence and that you know what you’re doing. Sometimes it’s telling them, ‘Hey, I’ve been doing this for a while and this is my team and I know what’s best for them, I know what we expect from them. And we’re asking that same expectation of you,” Mitchell said.

The best part of Mitchell’s job is the players. She gets to watch them mature from a first-year student-athlete who might have “a chip on his shoulder” to a leader who everyone is looking to for answers.

“During the off season, we have some of our seniors speak in front of the team. It’s amazing to see their growth, not only as football players but as men,” Mitchell said.

Mitchell’s appointment as the director of football operations also represents a growth in the field, not only for women, but for women of color. She is one of a handful of women in this position in Division I football. She is the first Black woman in this position at Notre Dame.

“When you’re put in a position such as mine, you don’t think about being the first or one of a few,” Mitchell said. “You really are just grateful for the opportunity. And you know you can do the job because you’ve had the experience to get it done. I think it shows people that a young Black woman can take on a job like this and be successful in it, at one of the most successful football programs in the nation. It fills me with pride to be able to track that path and show people that we can do it.”