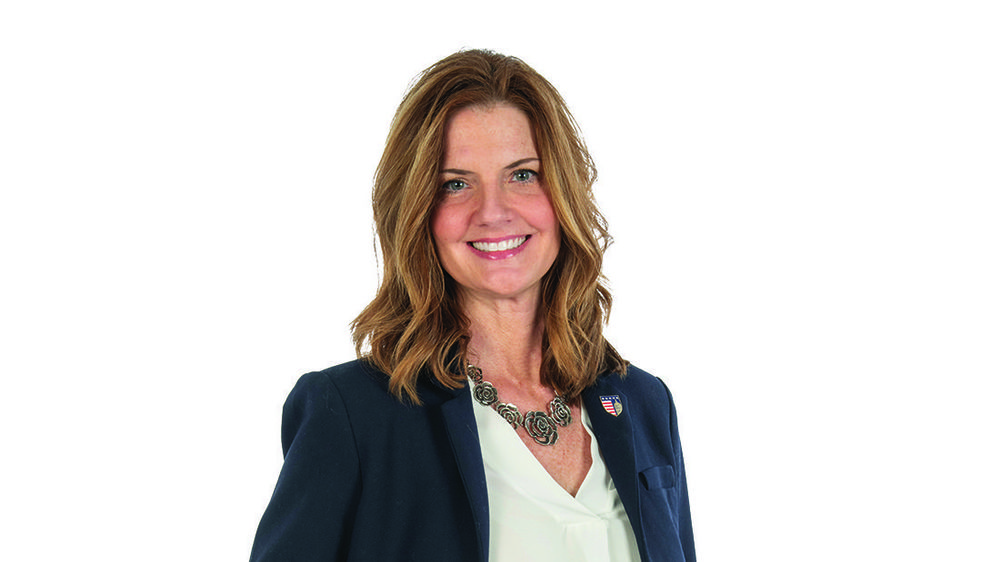 There’s one sure thing you can say about Tracy Skibins, senior director of emergency management. Service is in her blood.

Tracy was born in California, while her father was stationed there in the Navy. She lived there until she was two, before moving to Indiana, the birthplace of both of her parents. Near the end of high school, Tracy found herself with no real direction, not knowing what she wanted to do. An army recruiter visiting her high school had a suggestion. “And the next day I signed on the dotted line.”

Tracy went to the U.S. Army Airborne School and became a paratrooper, then a parachute rigger. Later, she became a military police officer. With this experience, she was the perfect candidate for her next public servant position — a South Bend police officer.

… her hard-working parents, who made her who she is today.

… spending time with her husband and two daughters.

... her seven supportive girlfriends who are there for each other.

… anything to do with Lake Michigan.

… getting outside on a sunny day.

… being a role model for young women.

“I loved every single thing about it. I could not believe that I was getting paid to do the job,” says Tracy. Working for South Bend Police Department (SBPD) would eventually lead to her next career move to the Notre Dame Police Department (NDPD). While working a shooting on the midnight shift for SBPD, a man at the scene began asking her questions.

“‘Do you like working at the police department? How long have you been a police officer? Do you have a college degree? Any prior military?’ And so on. I just looked at him. It’s like 2 o’clock in the morning. I’m thinking, why is he asking me these bizarre questions? Well, he was the coroner, and also the chief of police at Notre Dame.”

The man, Rex Rakow, asked if she would ever consider applying for a position at Notre Dame. Tracy eventually applied and began working at Notre Dame a year later. Married to a South Bend police officer, Skibins started a family while at Notre Dame. She already had an associate degree and she’d go on to get her bachelor’s degree.

After working different positions for 15 years at NDPD, another opportunity with the city of South Bend presented itself — this time as the director of code enforcement. She was there for two and a half years before returning to Notre Dame as the senior director of emergency management.

In her current position, Tracy is charged with the strategic planning, implementation and management of the University’s overall response to emergencies on campus. This means making sure people are prepared for an emergency, should one arise. Tracy oversees the emergency operations center (EOC).

“The EOC includes the people behind the scenes,” as she describes it. “The police are the first responders, and head straight to the scene of the emergency, while the EOC makes sure that everything else is addressed as soon as possible. The folks in the EOC gather and analyze data and make decisions, so that ultimately classes can resume and people can return to work. It takes a team to navigate an emergency.”

An example that campuses and schools are all too familiar with is the active-shooter scenario. Tracy explains that in this scenario, police respond to the scene and the EOC looks at locking down facilities, sending out emergency messages, etc.

Another scenario might involve an athletic event underway, with bad weather on the horizon. “Questions considered by the EOC might include, ‘Do we shelter in place or evacuate the venue? Where do we put folks if we have to evacuate? Is there just going to be a delay?’ So, we manage the emergencies and make sure that the campus is prepared for an emergency.”

Tracy wasted no time getting back into the swing of things in her new position. Not too long after taking the position, she traveled to Israel with Keri Kei Shibata, chief of police at Notre Dame and Jaime Signoracci, associate director of international travel and safety (see international story on page SF4). The seven-day trip involved all three visiting the Tantur Ecumenical Institute, Bethlehem University and Hebrew University. They also met with the Israel Police, with a goal of assessing safety in the areas where students, faculty and staff spend time.

“It was an absolutely amazing trip. We worked long hours, but still had time to visit sites.”

As Tracy settles into her new role, she knows enough from experience to take time to “get the lay of the land” before going in and changing everything. “I want to look at what’s already happening with the foundation of emergency management here on campus. And then I’ll look for opportunities for change and improvement,” she says. For Tracy, change and improvement is about and for the people she serves.

“I’ve worked at both Notre Dame and with the city of South Bend for a very long time, and having personal connections with folks in the area is extremely helpful,” she says. “I always look for opportunities to network and consistently work to build and strengthen relationships. Relationships are essential when managing emergencies.”