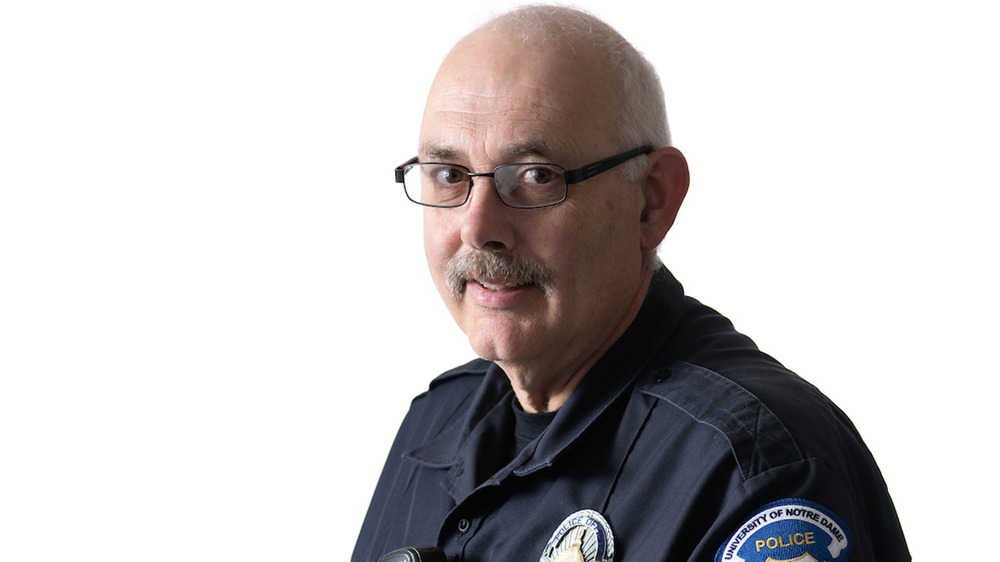 When Patrick Holdeman’s kids had all graduated and were out of the house, he wondered what he might do next.

Then he met Sister Irene Pastagan, O.F.M., a Franciscan nun from the Philippines, who was on campus to recruit at Holy Cross. “She suggested doing mission work overseas,” he says.

Patrick has since — using his vacation time from work — made nine trips doing mission work in the Philippines and Vietnam with a number of different volunteer and social service organizations. 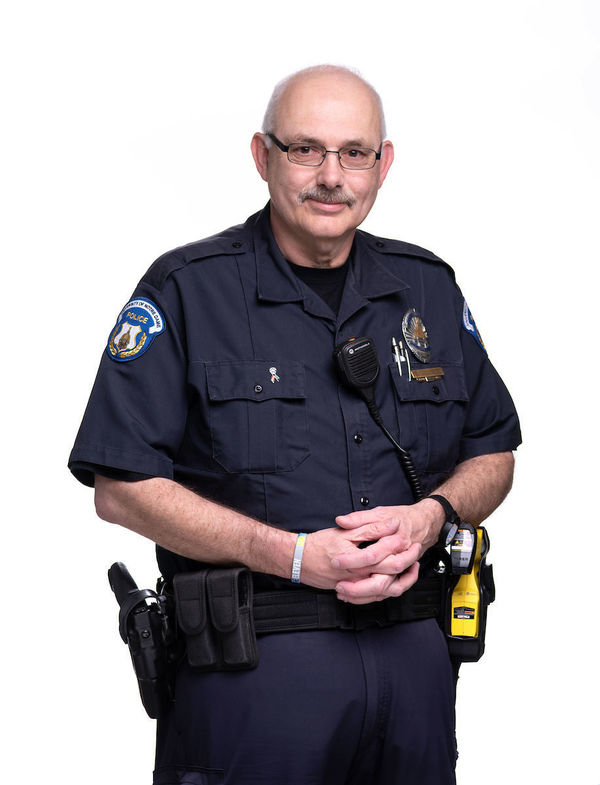 A Notre Dame Police Department patrol officer on the day shift, Patrick joined the University in 1995 as a paramedic, after working for Honeywell (now Allied Signal) doing both security and fire response. He went through the police academy in 1999 and became an NDPD police officer that same year.

One of the more unexpected facts in Patrick’s biography is that he’s a naturalized American citizen. “I spent my first 12 years in France, and was sworn in as a citizen in South Bend,” he says. His mother was French and his dad was in the U.S. military. Born in Bordeaux, Centre, France, French was his first language.

Patrick and wife Janice live on South Bend’s west side with Hope, their Maltese/Pomeranian mix. They are the parents of four children — Patrick, who just graduated from Indiana Wesleyan with an MBA; Jared, an Army staff sergeant and recruiter; Sarah, a Notre Dame alumna who will be having baby No. 6 in October; and Christian, who’s attending college and working at Saint Joseph Regional Medical Center — and eight grandchildren.

Sister Irene, he says, connected him with the basilica in Cebu City, a highly urbanized city on the island of Cebu in the Central Visayas region of the Philippines. “It has a population of around 600,000, with 5 percent very rich and 95 percent poor to very poor.”

While there, he worked with Youth with a Mission, an evangelical, interdenominational, nonprofit Christian missionary organization, and SOS Children’s Villages, a private, non-political, nondenominational organization that provides long-term family-based care to children in need.

“The region is No. 2 in the world for sex tourism, and we tried to create an environment to assist families and youth, to provide them with food and water and resources,” Patrick says. “They have no electricity, no running water. They scavenge from dumps to feed their families. When I’m working there, the basilica is our headquarters. I rent a jeepney (the buses that are the most popular means of transportation in the Philippines), load it with water and 1,000 packets of rice wrapped in banana leaves and distribute it to the community.”

He raises money for the trips through the local Filipino community, individuals, local churches and various groups at the University. All money raised goes to support the mission effort — he pays his travel expenses out of his own pocket.

In April 2018 he traveled to Marawi City, a Muslim enclave devastated in a 2017 siege by Philippine forces against Islamic State-linked militants. After five months of urban combat, the city lay in ruins. Most of the city’s 100,000 residents are still living in refugee camps or with family members.

“Our convoy had a semi-truck loaded with supplies to go to the city, half donated by Doctors Without Borders,” he says. “We would find bodies of Muslim families executed by ISIS, and the Red Crescent (the International Federation of Red Cross and Red Crescent Societies) would contact families to come and give them a proper burial. We were also doing rescue work taking people to refugee camps.

“On the second day, we had broken down for lunch. We’d take turns on watch. One young Filipino Marine, Jose, went across to another building and stepped on an IED. When I reached him, his leg had been blown off. There was nothing I could do. All I could do was tell him I was with him, and he was not alone. He died in my arms. A 27-year-old Marine. We sent his body back to Mandaue City on Cebu.”

The only time Patrick rode in the semi himself, the group started taking gunfire, and Esteben, their truck driver, was hit. Patrick managed to turn off the truck, and when the shooting stopped, they radioed ahead for help. Three days later Esteban, bandaged and on antibiotics, was escorted back to his home in the central Philippines.

Holdeman wired money, the equivalent of $1,000, to pay for surgery. “I felt responsible,” he says. “He had a wife and five children.” But Esteben died before the surgery could be performed. “The Catholic church and the local mosque collaborated to build a small sari-sari, or convenience store, for his wife to run to support the family. They built the storefront, added running water, a modern toilet. When I was there in October, the store was doing well. The money I initially provided went to stock the store.”

In May 2019 Patrick took another trip to Vietnam and the Philippines. He met Sister Irene in Taipei and they traveled to Ho Chi Minh City together. One evening they took a large group of street kids (along with their Vietnamese military escorts) to see “Avengers: End Game.” Part of their mission is to connect the children with local parishes and resources to get them off the streets, he says.

In the Philippines a few days later, Patrick was again focused on delivering bottled water to Cebu — the country has suffered through a terrible drought. The Cebu City Council declared a state of calamity, and water rationing was in effect. “We brought rice — the rice fields were completely dry,” Patrick says. He restricted himself to just a liter of water per day during the trip. “I was very dehydrated, but I knew I had to be able to share with the community. The worst was the dying dogs and cats.”

With the donated funds he’d brought, they repaired a water pump and well, and had enough left to dig another well. “We dug through the hard lava rock with spades, shovels and axes. The well was 8 by 8 (feet), and we dug about 14 feet down before we hit water. As the water rose in the well, it was amazing — there were already hundreds of people lined up with buckets.”

Before leaving for South Bend and home, he was able to spend time with his friend Adrian, a Cebu City police officer; wife Imhee; and their daughter Meaghan, Patrick’s goddaughter.. The last day of the trip he spent with Esteben’s widow, Lothse. “We bought goods to restock the store, clothes and sandals for the children, and took them all out for dinner,” he says. “At a TGI Fridays, believe it or not. But with Filipino food. Everything includes rice.

“I belong to a Catholic church, Sacred Heart, and I do a lot of my mission work with the Vineyard Church on Jackson Road. Individuals and departments at the University have been very helpful. We want to try and help families whose income earners have been killed. I leave my mark knowing I’ve helped people. I think of the people we were able to help and the impression we made as Christians helping a Muslim community.”

Holdeman will be making another mission trip in December. People can contact him if they’re interested in contributing (pholdema@nd.edu). “Wherever I’m called to go, and if I have resources to bring, I will do that,” he says. “I follow my heart and the Holy Spirit.”