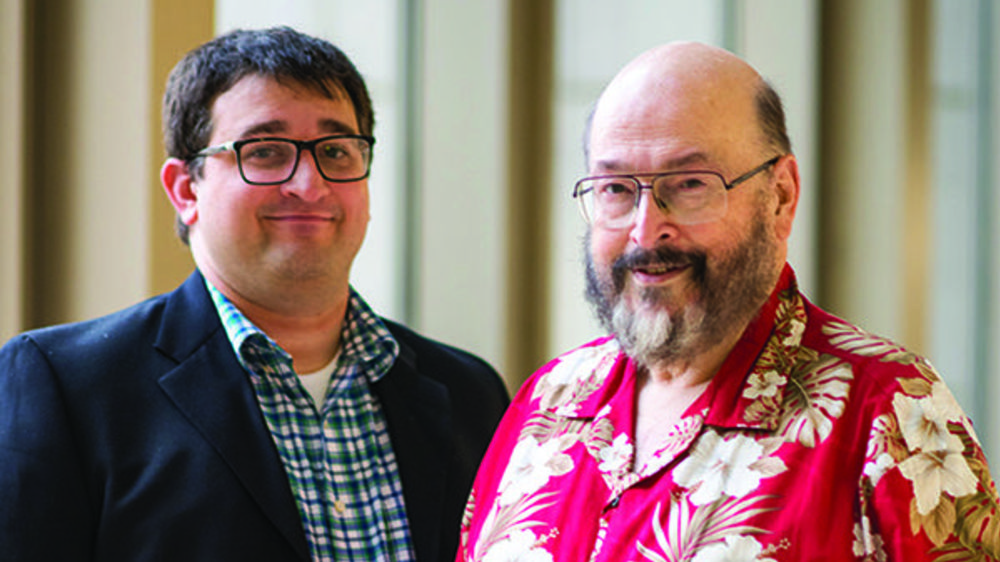 For Bill and Jim Wilkie, there’s just something about Notre Dame.

Bill (BBA ’66), the Aloysius and Eleanor Nathe Professor of Marketing in Mendoza, earned his marketing degree here in the 1960s. After going on to get his Ph.D. and MBA at Stanford University, he built his career at Purdue, Harvard and the University of Florida — but when Notre Dame came knocking in the ’80s, he couldn’t say no.

Bill moved his family, including his oldest son, Will; his daughter Allie (MNA ’09); and young son Jim (BBA ’05), now assistant professor of marketing in Mendoza, to South Bend. Jim grew up attending sports games and spending time with his father on campus — he even has a photo of himself as a 5-year-old with then President Rev. Monk Malloy, C.S.C. When it was time to apply to colleges, he knew where he wanted to go.

“I wasn’t really pressured, per se, to go here, but I always felt that I’d probably wind up here,” says Jim, who graduated in 2005. Now a consumer psychologist within the marketing department, he credits an anthropology course he took with James McKenna for getting him initially excited about the potential of pursuing a career in which he would study human behavior.

“Beyond Professor McKenna being a superb teacher that I enjoyed learning from, that was the first course that resonated with my tendency to ponder why people do some things that, logically speaking, seem to be quite bizarre. It took a more abstract, big-picture approach to try to explain why people, as part of the human species, behave in certain ways,” Jim says. “While growing up with a father in academia made me more familiar and comfortable everything that goes along with the career, that class was probably the initial spark that motivated me to actually pursue becoming a professor.”

After earning his doctorate at Northwestern, Jim drew interest from Yale, Johns Hopkins, Notre Dame and Georgetown, among others, for his next career move. But he had married a Notre Dame alumna, Mairin Amato (BA ’07), had family here and had a newborn, Morgan, at home. For him, the choice was clear.

“It made a lot of sense to take this offer. It’s a very good, well-respected school,” he says. “I knew a lot of the people in the department already because I grew up around them, though it was a little weird for that element as well. But, in my sixth year, I’m comfortable viewing them as colleagues and I feel that the same is true for them. So I got to start the next chapter in my life by coming home, which is pretty nice.”

“As a parent, I didn’t want to be pushy about what he wanted to do,” says Bill, who was recused from considering Jim’s candidacy. “But I’m happy with how it turned out.”

Both Wilkies enjoy working together in Mendoza. They don’t interact much professionally — even though they’re both marketing professors, they have different areas of interest — but they like getting to spend time with each other on campus.

They enjoy their students, too, many of whom take classes from both Wilkies.

“I benefit from the fact that they’ve had him first because they like him, so they come in thinking they’ll like me,” Bill jokes. But there’s one thing Bill loves to do that Jim didn’t inherit.

“I wear Hawaiian shirts every day to protest the South Bend weather in the wintertime,” Bill says. “Jim will show up to talk to my class, and he has this slide of himself in a Hawaiian shirt which he bought in Fiji on his honeymoon. He makes sure to tell them, ‘This is my only Hawaiian shirt,’ and they get a laugh.”

Now the next generation of Wilkies is growing up on campus. “This year I’ve started to take my daughter, Morgan (age 6), to sporting events on campus, and she’s really getting into it. One of the basketball players was in my class this past year and I introduced her to him, and he’s her favorite player now,” Jim says. “She and my son, Owen (age 3), already know most of the Victory March and am sure will continue to be lifelong fans of the school.”