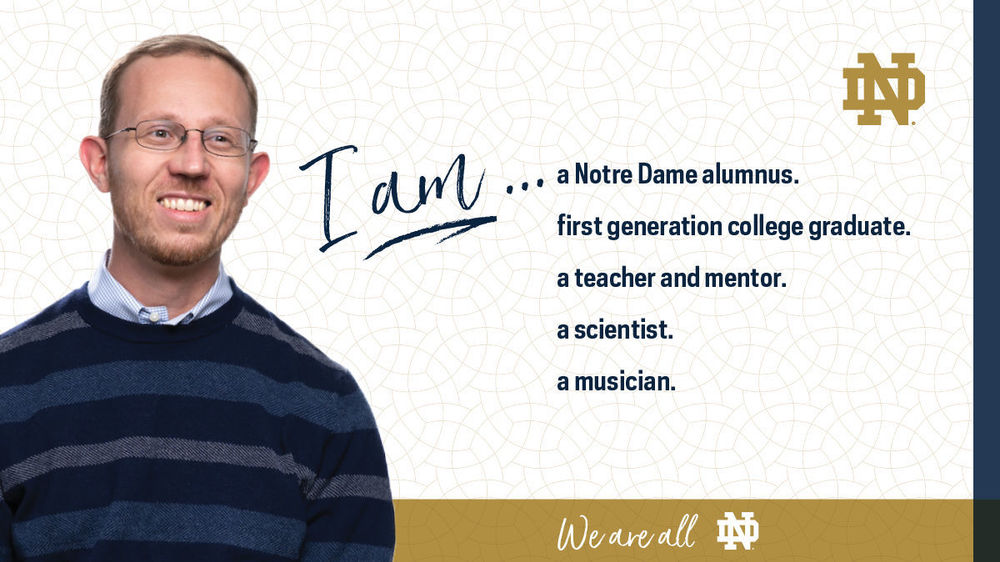 Jon Camden first found his home at Notre Dame 25 years ago when he declared a chemistry major and signed up to take a credit course on playing the organ.

The music study led to marching band, liturgical choir and a rich social life focused on Basilica music — which led to an extra year on campus to complete a second major, in music, and a full-time job as interim director of music at St. Pius X Catholic Church in Granger, which included playing at five Masses every weekend. The chemistry study led to a doctorate in physical chemistry at Stanford University, postdoctoral research at Northwestern University, and six years on the faculty at the University of Tennessee at Knoxville, where he won two prestigious university honors and a National Science Foundation CAREER Award.

In 2014, Jon returned to Notre Dame, where he is professor and director of undergraduate studies in the Department of Chemistry and Biochemistry. Based in McCourtney Hall, his research group is developing new applications of plasmonic nanostructures that are important for solar cells, chemical and biological sensing, and targeted detection of individual molecules. He has taught freshman general chemistry almost every year, upholding the focus on undergraduate education that he enjoyed as a student. Jon is also the recipient of the Rev. Edmund P. Joyce, C.S.C. Award for Excellence in Undergraduate Teaching in 2020. Jon has graduated eight doctoral students and supervised six postdocs and more than 20 undergraduates. He also sings in the Notre Dame Basilica Schola and plays the massive Murdy Family Organ in the Basilica for daily Mass every Thursday.

“Notre Dame is a unique place,” he says. “One of the reasons I came back is because I believe that Notre Dame is both a Catholic university and a truly excellent research university.”

The combination has proved decisive since his freshman year, when involvement with music — continuing a longstanding childhood interest — provided an environment for examining and understanding his faith.

“When I first came to Notre Dame, I struggled my first year,” he says. “I felt I clicked when I got involved in sacred music. So much of my undergrad social life, my experiences and my friends revolved around the Basilica and what I learned about being a church musician.”

Since his return, Jon, a member of the last class who lived in Grace Hall, has enjoyed the daily reminiscing of undergraduate life at Notre Dame and meaningful high points such as singing at the memorial service for Rev. Theodore Hesburgh, C.S.C.

“I still love walking across campus,” he says, “and seeing both the things that have changed and the things I remember from 25 years ago.”