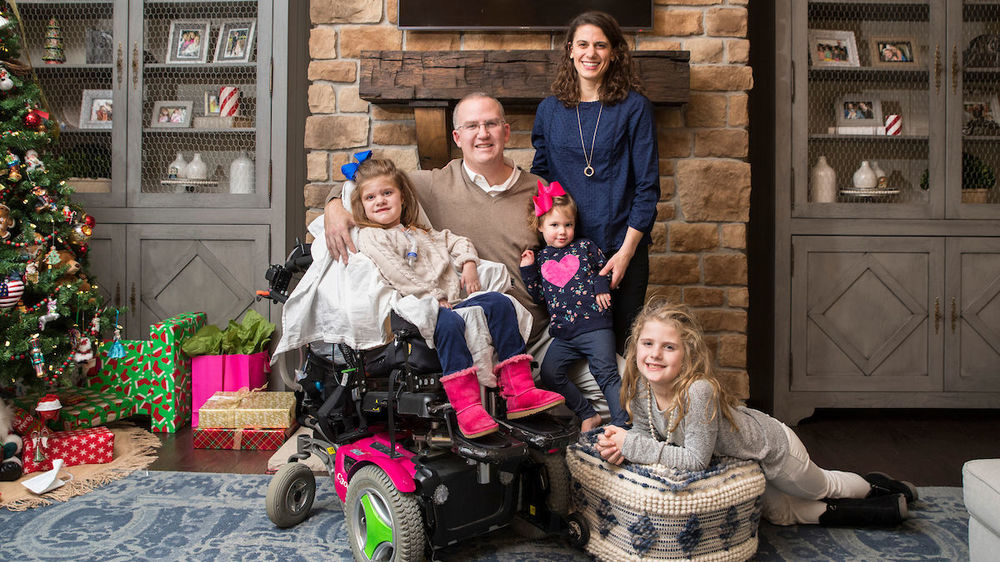 Parents wear a lot of hats as caretakers of their children. From meal maker to mess cleaner, personal chauffeur to story reader, they do what needs to be done to ensure their children are happy and healthy.

“The main thing we have to do is breathe for her,” says Eric of their 5-year-old.

At 4 months, Catherine was diagnosed with SMARD, or spinal muscle atrophy with respiratory distress. Though the disease is extremely rare, Catherine is their second child to have been born with motor neuron disease. 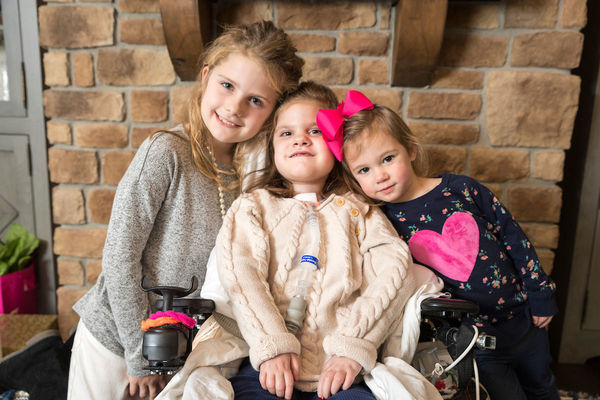 Sisters Molly, Catherine, and Caroline Sims, left to right,  pose for Notre Dame photographer Barbara Johnston. Above, they are pictured with parents Eric and Jill Sims.

The couple’s infant son, Bobby, born a year before Catherine, died from SMARD, though at the time doctors identified the cause as sudden infant death syndrome.

“The support from the University community has been overwhelming, both for Catherine and her disease but also with our son, Bobby,” says Eric.

Eric’s colleagues in the economics department had a tree planted on campus at Saint Mary’s Lake in Bobby’s memory.

There is no treatment or cure for SMARD.

“Catherine is in chronic respiratory failure, kept alive by a ventilator,” Jill explains. The 5-year-old requires around-the-clock care from her parents and at-home nurses.

As a result of muscle weakness, Catherine’s body is largely paralyzed, from her fingers to her toes. However, she has the mental capacity of a typical 5-year-old, allowing her to attend kindergarten.

“She has a complete understanding of what’s going on around her,” Jill expresses, noting that because Catherine is nonverbal and in a wheelchair, many assume that she is cognitively impaired as well.

“She loves being with other kids,” adds Eric, “she wants to do all the normal things.”

“The normal things you give up are actually really hard,” Jill says. “We aren’t able to include her in all of the very mundane, but normal activities of family life. She’s not there, she’s at home with her nurse.”

However, Jill and Eric are determined to create an environment for Catherine that is as normal as possible.

“She has to follow the rules like the other kids in our family because that’s a healthy part of growing up,” Jill shares. “Unfortunately, the world’s not going to make an exception for her even though she’s overcome a lot of hurdles. So we’re raising her to be able to participate in society as a regular citizen.” 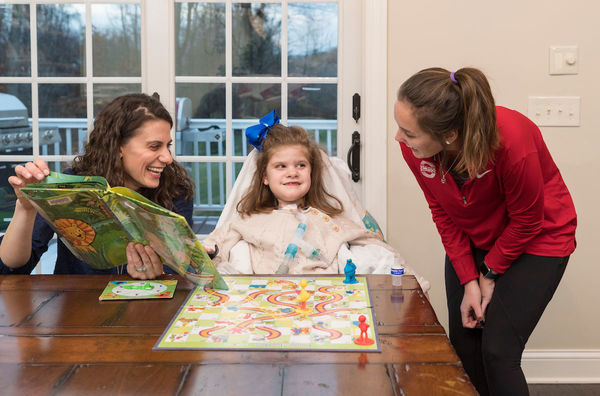 Jill Sims reads a story to Catherine, who is in kindergarten. To Catherine's left is a Saint Mary's College nursing student Claire Hansen, a junior, who works with her.

Despite the all-consuming nature of the disease that afflicts their daughter, Eric believes that they are blessed in many ways.

From Facebook groups composed of other parents of children with SMARD to the nurses who have been at Catherine’s side since the beginning, Eric and Jill have numerous sources of support to guide them through the day to day, including the Notre Dame community.

“I can’t tell you how many people, since the beginning, have been praying for us,” shares Eric. “We believe that there’s something more to this than the daily struggles, so we try to offer that up. And just being at Notre Dame, a place that promotes that and facilitates that and supports that, is hugely beneficial.”

From watching Notre Dame band practices on Fridays in the fall to receiving a tray for Catherine’s wheelchair made by the student group Student Engineers Reaching Out, Catherine and her family have felt the love and support from the University community in various ways.

During one especially difficult period of time, Eric says his economics students showed their support by organizing weekly dinners with him while Catherine was hospitalized in Indianapolis. His family stayed there, and he traveled back and forth so he could continue to teach his classes at Notre Dame.

“I think that one of the things that I’ve been tasked with is to show young people how to deal with life’s hardships and meet responsibilities,” says Eric.

His example had a lasting impact on his students, such as 2015 alumna Kara Cronin.

“Professor Sims and his family taught me so much about faith and resilience, and I feel like that’s something that would have happened had I not been at Notre Dame. The lessons that I learned from getting to know them have taken me so far in my life.”

The impact, however, goes both ways.

“I thought, it’s easy for me to get up and run a race. I’m healthy, I can breathe on my own,” she shares. “Catherine can’t breathe on her own.”

In her search to find a SMARD-related charity to support, Kara discovered Jackson Laboratory in Maine — the only U.S. lab at the time conducting SMARD research.

The family was energized to learn research was underway to find a cure for this rare disease. Eric’s parents were so moved, as a gift for Catherine’s third birthday they funded full-time research at the lab for five years.

When the University of Missouri began research on SMARD, Eric’s parents made a commitment to fund research there as well.

The Sims family prays the disease garners more attention and that more research is devoted to finding a cure.

All the while, the parents are devoted to meeting the needs of Catherine and their other two kids. The couple sees Catherine as “their child first, and the disability second.” At the end of the day, they are parents fulfilling the role prescribed to them.

“I see in Catherine the suffering Christ,” Jill shares. “And she suffers so well, and I try to remember, especially when things get hard, who we are actually taking care of — it’s a privilege.”