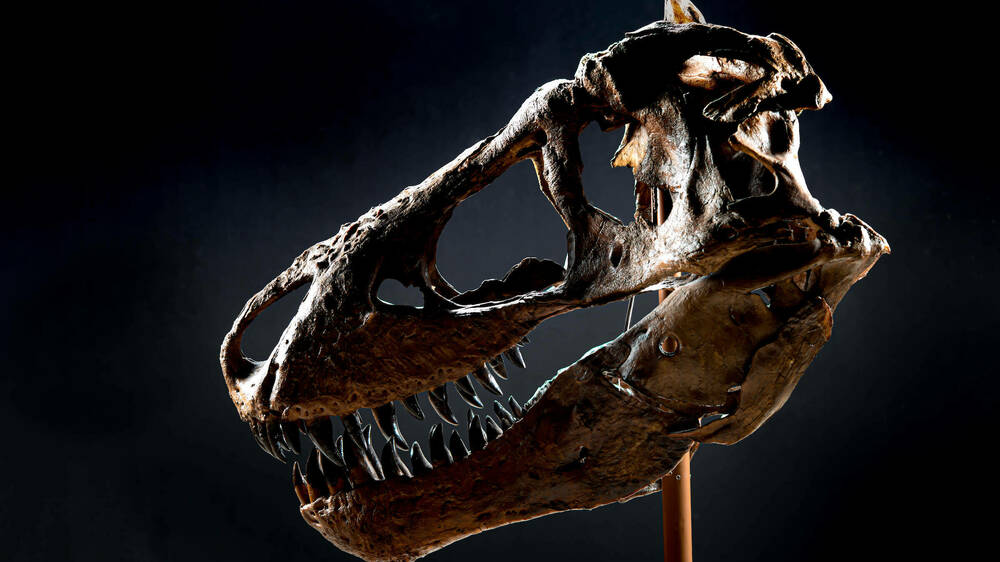 FORT PECK, Montana — The wind whispers on this morning in early June, and birds sing a short song every once in a while. Otherwise, silence reigns, with the only sign of human activity on this isolated spot in northeast Montana a distant two-lane road with an occasional car or truck. There are other signs of life, though — a deer had shed its antlers nearby, and a single primrose somehow sprouted out of dry, hard clay.

They call this Big Sky Country. Indeed, it is, and perhaps no more so than here in this stark and barren quadrant of the state. Today, the blue sky with big, puffy, white clouds stretches to the horizon and seemingly beyond.

And the land is just as big, and rugged, and imposing — and beautiful. Now arid, it was a swampland some 65 million years ago and more when dinosaurs roamed, swam and soared in these parts, including most notably the Tyrannosaurus rex — the “tyrant lizard king” — a bipedal carnivore with a massive skull that was balanced by a long, heavy tail. This is also where the dinosaurs died after an asteroid impact created so much atmospheric dust that sunlight was blocked, temperatures fell and the food supplies of many creatures on Earth, including the dinosaurs, were eliminated — or, that’s one theory. Many definitely died here, but not necessarily on the day the asteroid struck planet Earth. But more on that in a moment.

This site of whispering wind and songbirds is near the little town of Fort Peck — population 239 — which is about 75 miles south of the Canadian border and home to the massive Fort Peck Dam. The Kansas trading firm Durfee and Peck established a fort in the area in 1867 that served for about 15 years as a trading post and contained housing, a corral, stable, blacksmith shop, slaughterhouse, storehouses and a stockade. Though never an official military station, it often served as temporary headquarters for soldiers and commissioners who negotiated with local Native Americans before the Battle of Little Bighorn. Even earlier, Lewis and Clark came through the area in May 1805.

The current town of Fort Peck was founded in 1934 a few miles north of the old fort after the Army Corps of Engineers began construction on an earthen dam that was a project of the New Deal’s Public Works Administration. The town included an administrative headquarters, hospital, stores, a theater, recreation hall and other facilities. The housing in Fort Peck was insufficient for the more than 10,000 workers assigned to the dam, which led to the creation of other small towns in the area.

The dam stands on a stretch of the Missouri River and, at 21,026 feet in length and more than 250 feet in height, it is the largest hydraulically filled dam in the world. The project was featured on the cover of the first issue of Life magazine on Nov. 23, 1936, and since its completion has provided massive amounts of hydroelectric power as well as flood control and water quality management. It also created Fort Peck Lake, the fifth-largest artificial lake in the country at more than 130 miles long and 200 feet deep. Its 1,520-mile shoreline is longer than California’s coastline, all of which make the lake and little town a popular recreation area for boating, swimming and fishing.

But it was the area’s previous life as home to dinosaurs that drew University of Notre Dame geology professor and paleontologist J. Keith Rigby to Fort Peck year after year in the 1980s and ’90s, until 25 years ago, on July 4, 1997, his team of mostly volunteers uncovered one of the largest fossilized T. rex skeletons ever found. It was a discovery that led to a remarkable series of events that included disputed land claims, poachers, threats of violence, drawn guns, damaged bones and, in the end, an assembled T. rex skeleton that, in addition to its size, is among the world’s most complete.

Originally published by Dennis Brown at news.nd.edu on June 30, 2022.