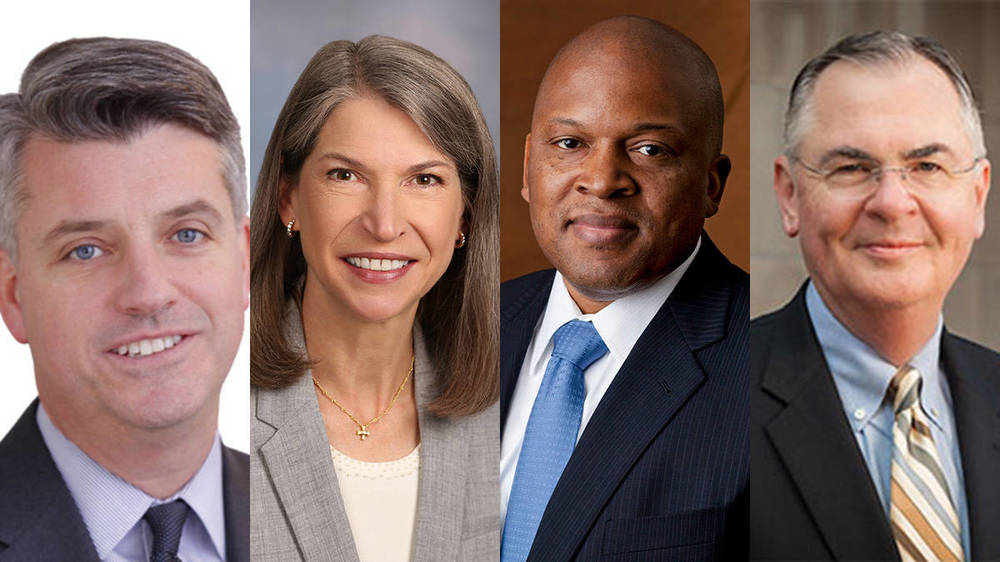 Four new members — John Coyle, Lois Folger, Tracy Graham and Nathan Hatch — have been elected to the University of Notre Dame’s Board of Trustees.

Coyle is a partner of Permira, a leading international private equity firm, and a member of the firm’s global leadership team, serving on the executive committee and leading Diversity, Equity & Inclusion. He previously was managing director and global head of the financial sponsor group at JPMorgan Securities after rising in the ranks over the course of 20 years at the firm. A graduate of Notre Dame with a bachelor’s degree in economics, Coyle earned a Master of Business Administration degree from Columbia University. He is a member of Notre Dame’s Wall Street Leadership Committee, and he and his wife, Jill, also a Notre Dame graduate, co-chair the Gift Planning Advancement Committee of Love Thee Notre Dame, the University’s planned giving initiative. The Coyles are the parents of two Notre Dame graduates and a current Notre Dame student.

Folger is founder and president of Folger Energy, an independent oil and gas company. She started her career at Texaco and then participated in the startup of Concho Resources prior to establishing her current firm in 2004. Folger earned bachelor’s and master’s degrees in engineering from the University of Texas at Austin, an MBA from the University of Texas Permian Basin and a master’s degree in finance from Notre Dame. She serves as trustee and president of the Catholic Charitable Foundation for the Diocese of San Angelo. She served on Notre Dame’s Mendoza College of Business Advisory Council prior to her election to the Board of Trustees. Folger and her husband, Richard, who also earned a master’s degree in finance from Notre Dame in 2017, also are members of the Love Thee Notre Dame Gift Planning Advancement Committee, and are the parents of two daughters, one of whom is a Notre Dame graduate.

Graham is the founder and managing principal of Graham Allen Partners, a private equity firm that specializes in investing in and building technology and technology-enabled companies. Previously, he partnered with the Chicago private equity firm Jordan Industries to co-found GramTel, a data center company that grew to be the largest privately held data center provider in the Midwest until its sale to Cincinnati Bell in 2007. A graduate of Notre Dame with a bachelor’s degree in sociology, Graham served previously on the University’s Student-Athlete Advisory Council. He has a long history of community service, including on the boards of Beacon Health System, the Center for the Homeless, South Bend Career Academy, The Stanley Clark School, Family & Children’s Center, South Bend-Elkhart Regional Partnership, 1st Source Bank and LCI Industries. Graham and his wife, Kerie, are the parents of three daughters, one of whom is currently attending Notre Dame.

After 16 years as president of Wake Forest University, Hatch will retire on June 30. His tenure was marked by numerous achievements, including the completion of a campus master plan; the development of nationally recognized programs in career services, leadership and character; significant progress in diversifying the campus culture; making realignments in business and medicine; and the completion of the university’s first billion-dollar capital campaign. Recognized as one of the most influential scholars in the study of the history of religion, Hatch received wide acclaim in 1989 for his book “The Democratization of American Christianity.” A professor of history for 30 years at Notre Dame, he also served as the University’s provost, vice president for graduate studies and research and associate dean of the College of Arts and Letters. As provost, he played an integral role in building the University’s centers and institutes for Irish studies, Latino studies, the philosophy of religion and medieval studies. Hatch earned his bachelor’s degree in history from Wheaton College and master’s and doctoral degrees from Washington University in St. Louis. Hatch and his wife, Julie, are the parents of three Notre Dame graduates.

In addition, James E. Rohr, retired executive chairman and former chief executive officer of the PNC Financial Services Group, was elevated to Trustee Emeritus. Diana Lewis, a member of the Board of Trustees since 1994 and a former circuit court judge in West Palm Beach, Florida, was elevated to Hesburgh Trustee. Established in 2019, Hesburgh Trustees are elected in recognition of their service to the University and to the Board.

Originally published by Dennis Brown at news.nd.edu on June 28, 2021.