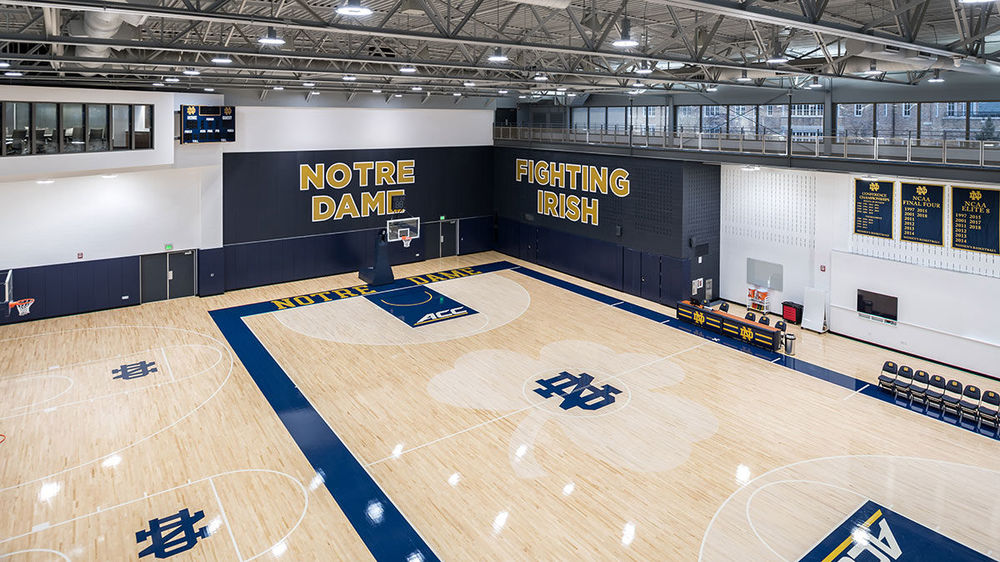 A foundational gift from Karen and Kevin Keyes, plus lead gifts from Andrew and Kirsten Braccia, and from Ryan and Jen Sweeney (class of 1999), paved the way for the renovation of Rolfs Athletics Hall at the University of Notre Dame, a state-of-the-art practice complex for the Fighting Irish men’s and women’s basketball programs. In addition, other benefactors made gifts to support the renovation, including Jim and Dana Bernhard, Jimmy and Susan Dunne, Tom and Jeanne Hagerty, Jim Mooney, Jim and Darla Wainscott, and 334 former women’s and men’s basketball players.

Work began in January 2018 to repurpose the Rolfs Sports Recreation Center after the opening of the Smith Center for Recreational Sports in the new Duncan Student Center on the west side of Notre Dame Stadium. Rolfs Athletics Hall became available for use in November and was dedicated this past weekend.

The 77,000-square-foot Rolfs Athletics Hall features video rooms, team rooms and locker rooms for both the men’s and women’s programs, as well as views into both practice gyms on the entry level. Also on the entry level are locker areas for the coaching and support staffs, and auxiliary locker spaces available for basketball alumni, practice players and other guests.

The lower level features nutrition space, a sports medicine facility with two in-ground (hot and cold) hydrotherapy tubs, a large strength and conditioning center and two separate practice gyms, each with a full-sized replica of the court in Purcell Pavilion, and several side baskets for drills.

The upper level includes a shared reception area, office suites for each program, each with a kitchen and storage space, and two conference rooms suspended above the respective gym spaces. A spectator viewing area, fully renovated with trophy displays and ample space for various entertainment functions, are also on the upper level.

Muffet McGraw, Karen and Kevin Keyes Head Women’s Basketball Coach, said: “What a tremendous boost and opportunity for our program. It is so important to our players to have access to a first-class facility that allows them to spend time working on their game. As one of the largest collegiate basketball practice facilities in the country, it will give our student-athletes everything they need to achieve their goals and for our program to continue to be at an elite level. We are so grateful to Karen and Kevin Keyes for their incredible generosity.”

“I’ve been looking forward to the opening of our practice facility since I arrived at Notre Dame, and it couldn’t have been made without the generosity and support of our alumni and so many other key donors,” added Mike Brey, Glenn and Stacey Murphy Head Men’s Basketball Coach. “With the NCAA’s renewed focus on student-athlete time commitment, our ability to schedule practice, athletic training, rest and recovery separate from a multi-use facility that was forced to serve three programs will pay immediate dividends to the well-being of our student-athletes and coaches.”

Karen Keyes earned bachelor’s and master’s degrees from Notre Dame in American studies and business in 1991 and 1995, respectively. A member and captain of the Irish women’s basketball team, she was the Midwestern Collegiate Conference player of the year as a junior and senior and finished as the program’s career scoring leader. She is chair of Notre Dame’s Advisory Council for the Student-Athlete, and head coach of Ridgewood High School girls’ varsity basketball team.

Kevin Keyes earned his bachelor’s degrees in economics and business administration (ALPA Program) at Notre Dame in 1990, where he was a member of the varsity tennis team. He is the chief executive officer, president and chairman of Annaly Capital Management, a leading real estate investment trust. Previously, he worked at Bank of America Merrill Lynch, Credit Suisse First Boston and Morgan Stanley Dean Witter. He is also on the advisory board of the Rock and Roll Forever Foundation.

The Keyes are residents of Ridgewood, New Jersey, and previously have supported Notre Dame through a gift to endow the women’s head basketball coach position, the Joyce Grant-in-Aid Program, President’s Circle and Sorin Society.

“We are honored and privileged to support the strong tradition of Notre Dame basketball. The newly renovated Rolfs Athletics Hall uniquely serves the women’s and men’s programs, which are both deserving of the best practice facility in the nation,” said Karen and Kevin Keyes. “Muffet McGraw and Mike Brey, their coaching staffs and players are the definition of class, and we are excited to contribute to their continued success.”

The Rolfs Sports Recreation Center opened in 1998 and served as the primary fitness facility for students, staff and faculty until the Smith Center opened in January. The Rolfs Center included a 5,000-square-foot workout room with cardio and strength training equipment; multipurpose courts for basketball, volleyball, indoor soccer, aerobics, yoga, floor hockey and dance; a three-lane, one-eighth-mile running track; locker rooms; and a game room with table tennis and pool tables.

The center was made possible through a gift from the late Thomas J. and Robert T. Rolfs, brothers and Notre Dame alumni who for many years directed Amity Leather Products Co. Tom Rolfs, a 1944 graduate, served on the Advisory Council for the Mendoza College of Business, and Bob Rolfs, a 1950 graduate, was a member of the College of Arts and Letters Advisory Council.

Their generosity in underwriting construction of the recreation center and many other initiatives at Notre Dame, including the Rolfs Aquatics Center, has been recognized in the naming of the new practice facility.

Originally published by Dennis Brown at news.nd.edu on May 08, 2019.