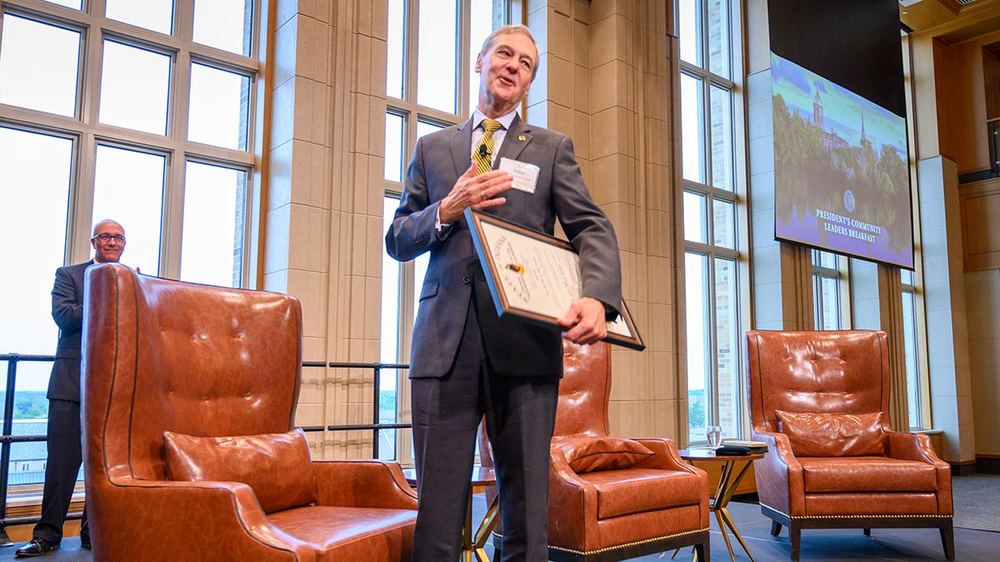 John Affleck-Graves, executive vice president of the University of Notre Dame, received the Sagamore of the Wabash award Tuesday (June 4), as well as the keys to the cities of South Bend and Mishawaka and to St. Joseph County, at the annual President’s Community Breakfast on campus.

Created in the 1940s by Gov. Ralph Gates, the Sagamore of the Wabash is presented by the governor of Indiana to people who have provided distinguished service to the state. Its name is derived from the term used by American Indian tribes for tribal chiefs and the Wabash River, the state river of Indiana.

In addition to his duties on campus, Affleck-Graves has been a champion of economic development in north-central Indiana. He chaired the Regional Development Authority, which played the leading role in securing a $42 million state grant in 2015 by bringing counties together to create development plans. He also assisted in securing a recent $42.4 million grant from the Lilly Endowment Inc. for the Labs for Industry Futures and Transformation Network for the South Bend-Elkhart region.

During his tenure, Notre Dame’s annual operating budget has grown to $1.5 billion from $650 million and the endowment has increased to $13.1 billion from $3.5 billion. Thirty-six new buildings have been constructed, totaling 3.3 million square feet.

A professor of finance, he specializes in the study of initial public offerings, valuation and asset pricing models and shareholder value added methodology. He has received 13 teaching awards at Notre Dame. A native of South Africa and a naturalized U.S. citizen, he will retire as executive vice president June 30 and return to teaching.

Originally published by Dennis Brown at news.nd.edu on June 05, 2019.