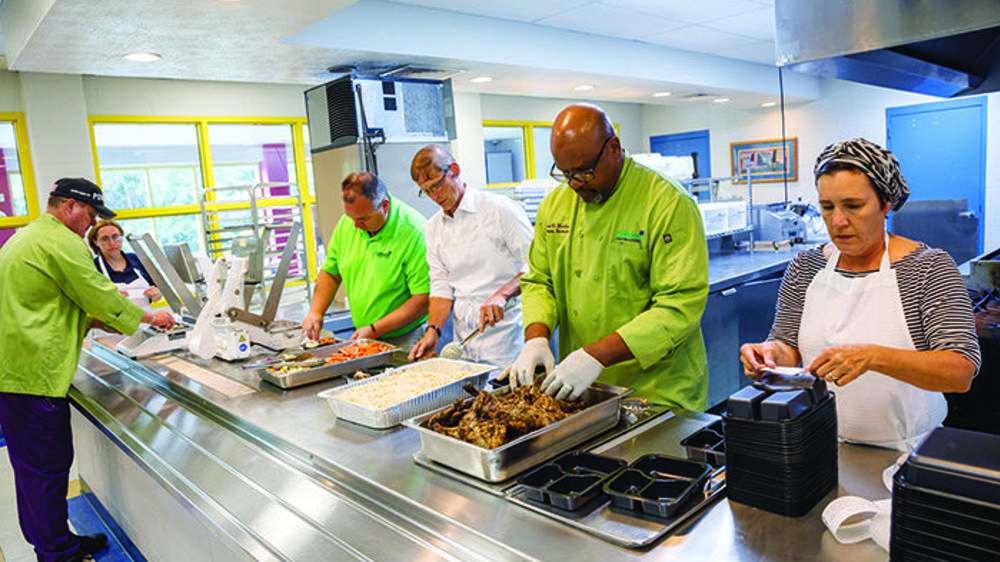 As the University was about to open the renovated and expanded Notre Dame stadium in time for the 2017 football season, the administration considered every detail, right down to what to do with the unserved and delicious food that would be left over following parties held in the new hospitality suites.

Along with Notre Dame’s concessionaire Levy, the athletics department’s Community Commitment staff was tasked with addressing this sustainability goal.

With the support of the University’s Office of Sustainability, Maureen McNamara, assistant athletics director of community commitment, and Karen Schirmuhly, director of operations for concessions and clubs, turned to the Office of Public Affairs for ideas on local agencies that rescue food for the hungry.

“Cultivate Culinary could do that for us,” says Jessica Brookshire, associate director of public affairs.

Cultivate Culinary School and Catering, a local nonprofit, was just getting off the ground. It provides food rescue services and culinary arts job training for at-risk high school students and adults.

The partnership between Notre Dame and Cultivate began in time for the 2017 football season. This fall, Cultivate has rescued nearly 12,000 pounds of food at football games alone.

“Although every game day is a bit different, we have made donations as high as 3,000 pounds per home game over the past two football seasons. The partnership we’ve developed has been great and our staff love knowing that the high-quality food we serve makes its way into the rest of the community afterwards,” says Schirmuhly.

In December 2017, the partnership was going so well that Levy announced it had expanded to Purcell Pavilion and Compton Family Ice Arena so prepared food could be rescued following hockey and men’s and women’s basketball games.

The partnership continues to expand on campus, and the University has helped spread the word about the nonprofit off campus too.

“Jessica and Public Affairs have helped us tremendously by promoting our mission, connecting us to important groups in the community and various departments on campus,” says Jim Conklin, the nonprofit’s president and co-founder.

For instance, Campus Dining now donates food left over from special events to Cultivate. This is in addition to the departments’ partnerships with Food Rescue US and FoodShare, which transport food to local homeless centers.

“We work with Kari to arrange food pickups from the football team meal in ‘The Gug,’” Conklin says, referring to the Guglielmino Athletics Complex.

Conklin says Cultivate picks up excess food from the complex once per day and often on the weekends, for a total of 10,000 pounds this year.

When rescuing food, Cultivate staff weigh and sort it by type — protein, starch or vegetable — for statistical purposes and then, in their kitchen, they package the food into recyclable, microwave-safe trays. Assisting with the process are culinary students and volunteers, some of whom are student-athletes, including members of the football team.

“For the players to package the same dishes they had enjoyed into balanced meals for those who are underserved and often overlooked is a full-circle experience for our football program,” says Oliver.

The resulting dishes and meals provide pantries and local service agencies a low-cost, nutritious alternative to canned and boxed foods.

“Hunger is pervasive in our community, with food insecurity affecting one out of seven adults and one out of five children,” Conklin says.

To date, Cultivate has rescued more than 125,000 pounds of food throughout the community.

“By rescuing food that has been prepared but not previously served, we can provide the hungry with well-balanced meals,” he says. “Notre Dame believed in our concept from the beginning and is an invaluable partner in fighting hunger in our community.”

Food rescue is one facet of Notre Dame’s long-term, comprehensive sustainability strategy, which includes efforts to reduce water and energy consumption and divert waste on campus.

If you would like to support Cultivate’s work in the community, go to bit.ly/2CmiWDT.