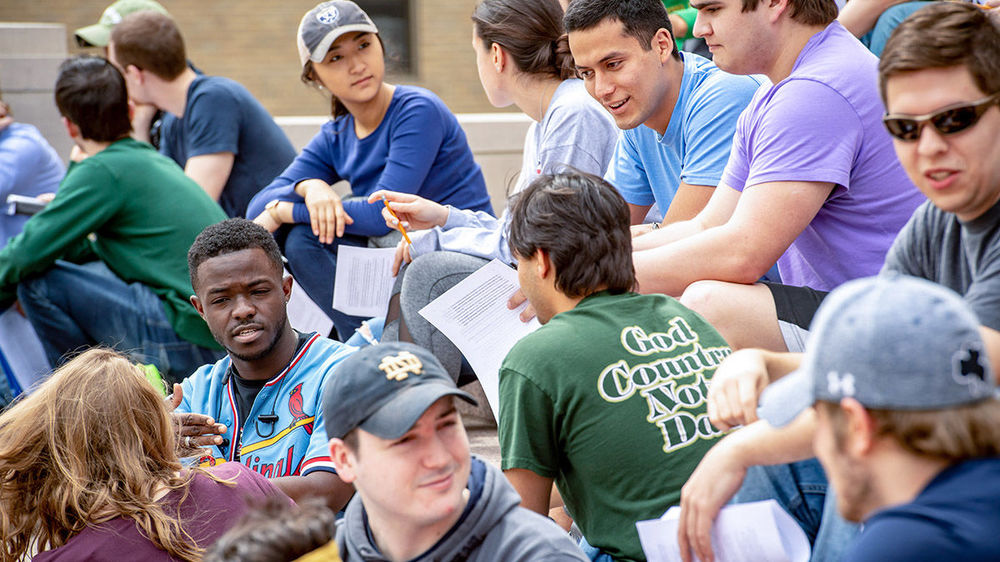 The cost of higher education is a hot topic on Capitol Hill, in the headlines and at dinner tables across America.

• Why does it cost so much?

• How can graduates repay student loans if they can’t get good-paying jobs?

• How does studying liberal arts help in the real world?

• Does higher education really prepare young people for the jobs of the future?

These are all fair questions, and Notre Dame, like many of the nation’s most prestigious universities, has good answers.

“I think all of us need to do a better job of explaining the value of higher education,” said Notre Dame Provost Tom Burish. “Most of the criticism of higher education tends to focus on high costs and student debt, which are important issues to be sure. However, the fact is that for most people the investment they make in earning a college degree is unquestionably one of the best they will ever make. Higher education profoundly and positively influences the course of a person’s life.”  However, the answers are neither short nor simple — and they require one to look beyond the ever-increasing cost of higher education.

By providing a core curriculum that emphasizes liberal arts, creativity and critical analysis, Notre Dame also prepares graduates to deal with the challenges of today and tomorrow.

In an article titled “How to prepare your kids for jobs that don’t exist yet” published on June 27 on fastcompany.com, columnist Ruth Reader suggests that even with “robot domination seemingly impending,” the need for human intelligence will remain.

She writes, “Experts who study the future of work agree that our ability to make sense of the world is our biggest asset in the wake of automation. While artificial intelligence is good at narrow, repetitive tasks, humans are good at coming up with creative solutions.”

Reader interviewed Avi Goldfarb, coauthor of “Prediction Machines: The Simple Economics of Artificial Intelligence,” who forecasted two career opportunities: people who build artificial intelligence and people who tell the machines what to do.

“While (Goldfarb) believes that most people will need a basic understanding of computer science, he thinks that studying art, philosophy, history, sociology, psychology and neuroscience could be key to preparing for the future,” Reader writes. Studying these subjects “will help young people to have a broad range of knowledge that they can use to put artificial to its best use.”

President Rev. John I. Jenkins, C.S.C., speaks often about the relevance of a liberal arts education, as he did over the summer in an address at Oxford University, where he earned a doctorate in philosophy.

“We often hear that education at universities is not particularly relevant to this or that profession, or that what someone needs to know for a particular profession could be delivered more efficiently than it is at universities,” Father Jenkins told the Oxford audience.

While a student could simply be trained for a specific occupation, he continued, universities offer something different: “training in the practices of inquiry at the highest level, by faculty at a very high level in their discipline, will give a student the knowledge and intellectual skills to flourish in a wide range of professional careers.”

While no one is satisfied with the rising costs of higher education, which have significantly outpaced cost-of-living increases for the past decade, the reality is that students today have a wide variety of financial aid programs on which to draw. At Notre Dame, for example, 68 percent of undergraduates receive aid in the form of merit and financial need-based scholarships. Many are offered the opportunity to work on campus to subsidize their education; others take out loans.

Notre Dame is a “need-blind” university, meaning that a student or family’s ability to pay the cost of attending is not considered as part of the college application process.

“We select students based on a combination of academic achievement and other factors, and it is only after they are accepted that we consider their financial situation,” explains Paul Browne, vice president for public affairs and communications. “And we work very closely with those admitted to make it possible to attend.”

“I don’t think people understand that it’s very expensive to offer the type of education we do at Notre Dame,” Browne says. “We’re recruiting the very best faculty members, people who have dedicated a major portion of their lives to educate themselves through the Ph.D. level. We’re funding undergraduate research and study abroad programs that are models in higher education. And we’re conducting research at the leading edge of science and technology. The type of education one gets at Notre Dame is very expensive to provide.”

Moreover, Browne says, higher education is not intended for everyone.

“My brother is a smart individual who was completely bored with the idea of being behind a desk for four years of college,” he said. “He became a police officer because he wanted to engage in exciting, meaningful employment right away. In cases like this, why invest in college? If you’re a skilled carpenter or an apprentice in a union and you see a good living unfolding for you, it’s not worth the investment.”

Scrutiny or debate over the value of higher education is not a bad thing, says Browne. On the contrary.

“It forces universities to examine how much are we charging for tuition, and we have to be sensitive to the fact that a lot of people can’t afford that,” he said.