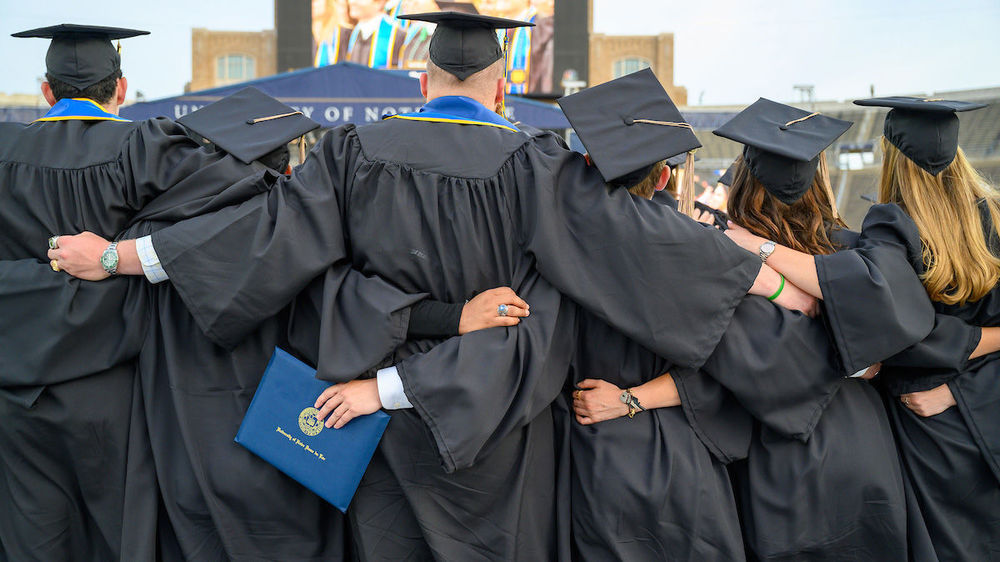 The University of Notre Dame celebrated its 176th Commencement Ceremony on Sunday (May 23) at Notre Dame Stadium. An audience of more than 14,000 family members, friends, faculty and graduates attended.

In a change from previous years, the Commencement Mass was held in the stadium immediately prior to the University Commencement Ceremony, during which degrees were conferred on 2,103 undergraduate students.

In her first Notre Dame commencement, Marie Lynn Miranda, the Charles and Jill Fischer Provost, welcomed the guests and introduced the speakers.

Salutatorian Alexis Waldschmidt, a biological sciences and Chinese double major from Naperville, Illinois, offered words of welcome and thanks on behalf of the graduating class and introduced the valedictorian, Madeline Owen.

Owen, a neuroscience/pre-med major and Glynn Family Honors scholar from Columbus, Ohio, observed that it seems prophetic this year’s graduating class will enter the world at such a vulnerable time.

“If we have learned anything in the past 14 months with the challenges of COVID-19 and the renewed fight for racial justice, it is that strength and new beginnings can be born out of vulnerability,” she said. “We were all asked to answer the call to rise up from despair to determination. As Notre Dame students, defeat was unacceptable.”

Likening recent hardships to Notre Dame’s history of strength born in part from the 1879 fire that destroyed the Main Building, Owen noted both stories are ones not of tragedy, but of renewal through perseverance.

“Our presence in this moment demonstrates that we have learned and grown along the way, and that we have persisted together, determined — none of us could have accomplished this on our own,” she said. “Today, just like that April day in 1879, is proof that each of us can be a force for good, and together our force is stronger than any one of us alone.”

John J. Brennan, chairman of the Notre Dame Board of Trustees, offered impromptu “Zoom bomb” remarks, expressing gratitude for all who had made Notre Dame’s “unusual and remarkable year” possible.

Introducing commencement speaker Jimmy Dunne, President Rev. John I. Jenkins, C.S.C., said, “I cannot think of a better speaker for this class than Jimmy Dunne, who faced daunting challenges and true heartbreak, and prevailed.” A special video detailed how Dunne led the recovery of his company Sandler O’Neill in the aftermath of the terrorist attacks on Sept. 11, 2001.

Dunne, who lost 68 colleagues in the terrorist attacks, supported the employees’ families including through scholarships for the children.

“A close friend of mine who died on Sept. 11 was an outstanding man named Kevin Crotty,” Dunne said emotionally. “He was a superstar at our company who was always giving other people encouragement. Kevin had two sons and a daughter and they have a great mother. One of those boys, Kyle, graduated from here three years ago, and the other is graduating today — your classmate, Sean Patrick Crotty.”

Noting a necessity to accept the good and bad times in life, Dunne said nothing was ever the same for his company, once located on the 104th floor of 2 World Trade Center.

“But I’m here to tell you this: In the days after 9/11, I had convictions to follow, and I know where that foundation was built,” he said. “As unready as I felt in a time of trial, what I most needed were the things that Notre Dame provided me.

“Whenever you hold yourself to the highest standards instead of just the latest ones, doing the right thing instead of just the easy thing, you’ll be putting into practice what you learned here. And as you grow in faith — aware of life’s greater purposes, and of Whose purposes they are — you will see that, too, as the gift of Notre Dame.”

Dunne received an honorary degree, along with Thomas G. Burish, the Charles and Jill Fischer Provost of Notre Dame from 2005 to 2020.

Carla Harris, vice chairman of wealth management and senior client adviser at Morgan Stanley, as well as a celebrated gospel singer, speaker and author, received the Laetare Medal, the most prestigious award given to American Catholics.

“I am so honored to stand here before you to receive the Laetare Medal,” she said, “and I dedicate it to my parents: my mother, Billie Joyce Williams Harris, who insisted that I was baptized Catholic and dedicated me to the Blessed Mother when I was 3 months old, and to my father, Capt. John Harris, who was a captain of a commercial fishing vessel for most of my growing-up life, who became a Catholic late in his life and for whom I had the privilege of standing beside as his sponsor.”

In her K-12 Catholic classrooms, Harris was taught the same values and principles emphasized in her home: to serve and treat others fairly. She noted the irony that — following a tumultuous year — the word Laetare means “rejoice.”

“How fitting, for I am indeed rejoicing as I think about the last 14 months of personal protocols, sheltering in place and social distancing,” she said. “I am rejoicing that, notwithstanding the deaths, the illnesses, the struggles that have emanated from the COVID-19 crisis, the pandemic of social unrest resulting from long-term racial injustices and the overall strife in the land, I am rejoicing that He has brought many, many good things, epiphanies if you will, during these months. I rejoice, because we have all learned how precious time is and that it is the most important asset that you have.”

Harris, who sang “Amazing Grace” to close the ceremony, offered three pearls of wisdom “after being a woman of color on Wall Street for 34 years”: “It is what you do for others that counts; fear has no place in your success equation; and your power lies not in who you are, but in Whose you are.”

In his charge to the graduating class, Father Jenkins said, “Class of 2021, you will always have a special place in my heart. As I often say, the greatest joy in this job is to travel around the country and indeed around the world, and see the great work and wonderful accomplishments that our Notre Dame graduates realize. That will be especially true for you, graduates of the class of 2021, because of all that we’ve been through together this year.”

The ceremony concluded with a benediction by the Most Rev. Kevin C. Rhoades, bishop of the Diocese of Fort Wayne-South Bend, who noted, “On this Pentecost Sunday, when the Holy Spirit descended upon the apostles gathered in the upper room with the Blessed Virgin Mary, and the mission of the Church began, we pray that the Lord will send forth His Spirit upon our graduates and kindle in them the fire of His love.”

Originally published by Shannon Roddel at news.nd.edu on May 23, 2021.