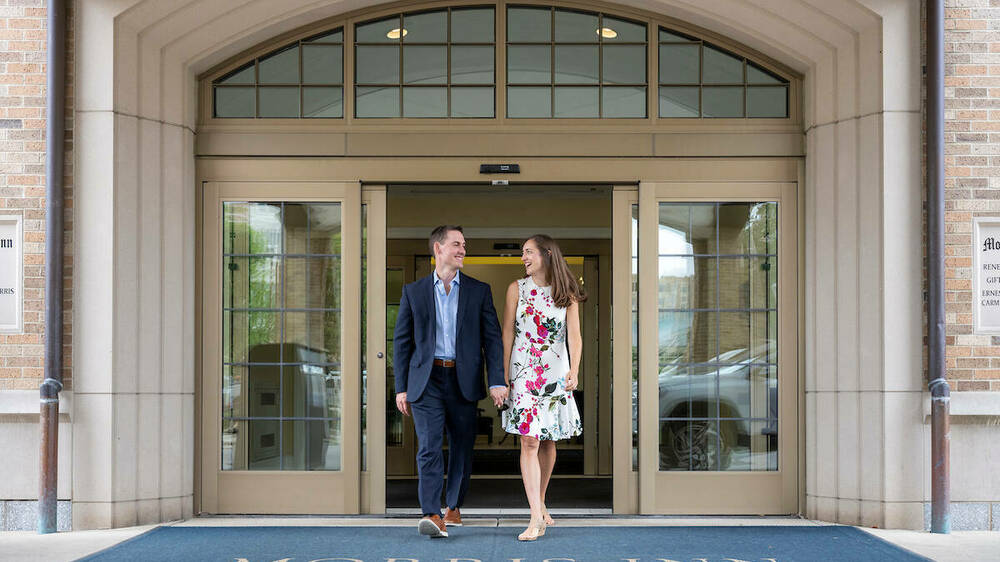 Determining a wedding date during the pandemic was challenging for Notre Dame alumni Kathryn Fuentes and Justin Orr, but their marriage was written in the stars ... or at least in a Spice Girls journal.

“I found my old Spice Girls journal and in it I wrote ‘Couples List 2001: Katie and Justin,’” Fuentes said. “My fiance and I grew up together in Chicago. We had a fake marriage as kids. His grandma was my next-door neighbor. She moved away when I was in the fifth grade, and Justin and I reconnected here in my junior year. We didn’t know we were both at Notre Dame!”

The day before their wedding, on a mild summer afternoon, the bride and groom stood in the lobby of the Morris Inn greeting their guests as they settled in at the hotel. The hotel would be the backdrop for several events that weekend, including a tiki and tacos themed rehearsal dinner on the Wind Family Fireside Terrace and breakfast at Rohr’s the morning after the wedding.

“This is our third wedding date, due to the pandemic,” Fuentes said. “It was supposed to take place on May 30, 2020. Then we tried to have it on Dec. 4. The one thing that was consistent is we knew it had to take place at Notre Dame.”

On Friday, July 9, all went as scripted and Katie and Justin were married by University President Rev. John I. Jenkins, C.S.C., at the Basilica of the Sacred Heart. A mariachi band greeted the happy couple and guests outside the church, and an elegant reception followed in the Dahnke Ballroom inside Duncan Student Center.

Theirs was one of three weddings held on campus the second weekend of July. Over the Fourth of July weekend there were five. With many of the wedding parties and guests staying at the Morris Inn, business has been humming at the front desk and at Rohr’s, the newly modernized tavern off the front lobby.

Rohr’s was completely reimagined in early 2020 and set to reopen just as the pandemic began. When it became clear the pandemic would be here for a long while, Rohr’s, like many restaurants, temporarily closed. Much of the staff was reassigned to jobs that supported the care of students who, at different times, were housed at the hotel.

“It feels good to be back working as a bartender and server,” Derrick Faulkens said. “And it’s exciting because we have had this new restaurant and for nearly a year and a half we’ve not been able to use it. So now we have people coming in and they’re excited about having this new facility and we’re excited to show it to them.”

At one of Faulkens’ tables sat Tony Castrodale, a 2021 alumnus recently hired by development, with two guests from Columbus, Ohio, his hometown.

“It’s wonderful to see where we’ve been and where we are now with the vaccination rates up and seeing life again on campus and people unmasked and co-workers in the hallways. I’m excited for the fall to come,” Castrodale said.

At another table was Regan Jones, director for military and veterans affairs. “I had lunch with an enFocus fellow who is helping Notre Dame with a project. … Face-to-face communication is so valuable in building relationships. It was delightful to see so many people in the dining room I hadn’t seen in such a long time.”

Like many people, Jones worked on campus during the pandemic. “I had the opportunity to help the provost and the academic leadership team roll out the Winter Session (among other duties). … It’s been great to see people come back face to face and build community in the Notre Dame way.”

Leslie DeVolder is back at her job as a hostess at Rohr’s after working with the COVID-19 Response Unit Hotline team, answering calls from students, parents, faculty and staff.

“It feels good to be back here and see everyone, but I will have to get used to being on my feet again,” she said. “I am sure by the end of the football season, it will feel like I never left.”

What they could use more of — at Morris Inn, the new McKenna Hall, which will house the Notre Dame Conference Center, and other places on campus — are employees. The first of a series of hiring events was held Thursday, July 8, at North Dining Hall.

At the recent hiring event, John Glon, assistant director of student dining, was optimistic that the more than 200 jobs available in the University Enterprises and Events and Campus Safety and University Operations divisions would be filled in time for the fall semester.

“I’ve been working at Notre Dame for 32 years and I think the overall picture of what Notre Dame offers will be very appealing to people,” Glon said. “Our pay is competitive, but what the University has that other places don't have are incredible benefits, like the educational benefits. I’ve had two kids go through college and now a third going in. … Plus we have programs where you can develop people. I’ve probably had 80 people over the past 30 years I’ve been able to promote.”

And as employees here, you get to meet people like the new Mr. and Mrs. Orr, and hear some great Notre Dame stories.

“Our first date was at South Dining Hall,” the bride said. “Isn’t that funny?”