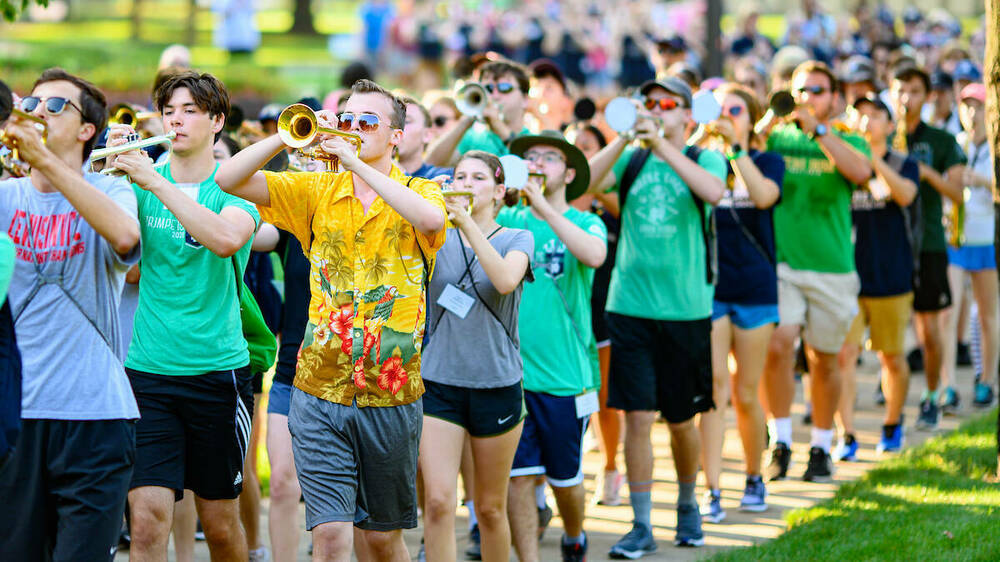 The Band of the Fighting Irish will kick off its 177th year with a march-out around campus at 9:15 a.m. Thursday, Aug. 18. Beginning outside the Ricci Band Rehearsal Hall, the band plans to march past several Notre Dame landmarks including the Hesburgh Library, Clarke Memorial Fountain and Grace Hall. The march-out will conclude at the Ricci Family Fields.

One of the traditional campus events ringing in the beginning of a new school year, the march-out features both veteran band members and students auditioning for a spot in the 2022 Band of the Fighting Irish. “The first march-out every August brings tears to my eyes,” said assistant band director Larry Dwyer, class of ’66. “The Notre Dame Band marches by the Hesburgh Library and plays the 'Notre Dame Victory March' for the first time each year. Once again the new and returning band members 'shake down the thunder' to begin an academic year. It is an amazing moment.”

Current and graduate students at Notre Dame, Saint Mary’s and Holy Cross can audition. Over the course of the four-day audition process, students receive instruction in marching and musical fundamentals, and will complete both music and marching auditions. The audition process concludes the evening of Sunday, Aug. 21.

Dating back to 1845, Notre Dame’s marching band is the oldest college band in continuous existence in the United States. In addition to a rich history of performing at concerts, campus celebrations and religious ceremonies, the Band of the Fighting Irish has a long tradition of providing music and pageantry for Notre Dame football games and athletic events.