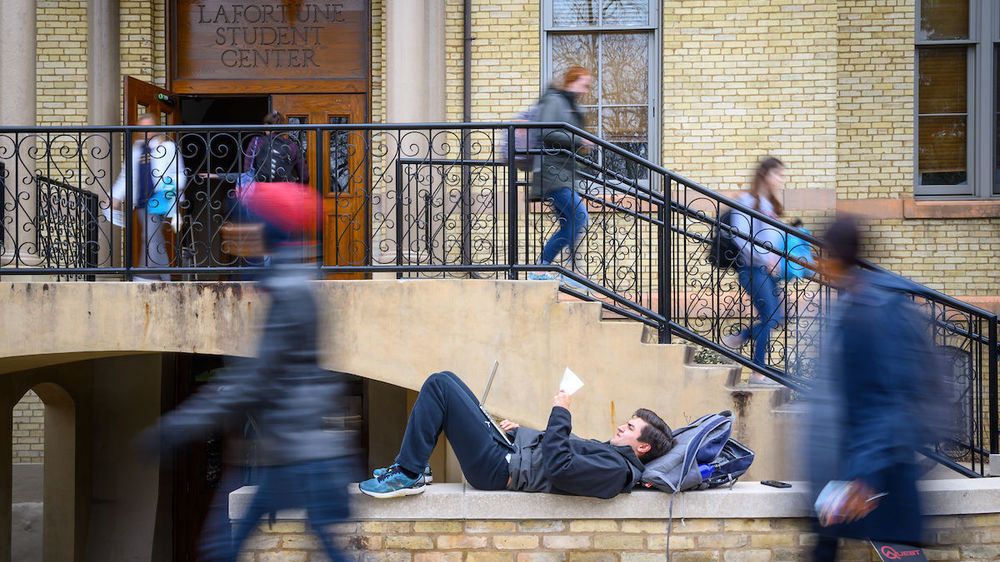 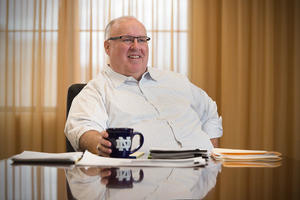 In 1842, the Rev. Edward F. Sorin, C.S.C.,  founder of the University of Notre Dame, envisioned the University would become “a powerful force for good.”

For Notre Dame alumni, that means: Take what you learned here and bring it to the world.

Scott Malpass, vice president and chief investment officer, has done that in his life’s work.

The double Domer ('84,'86) has managed the University’s endowment pool for 30 years. In that time, the pool’s value has grown significantly, which means financial aid, for example, has expanded exponentially. Scholarships, powered by the endowment, have allowed thousands of students with the academic merit to attend Notre Dame. Those alumni then take what they learned at Notre Dame into the world. The dividends of that are immeasurable.

“I am delighted to see the impact of the returns in the advancement of the academy and student life, and especially in the financial aid resources available to our students,” Malpass said.

“Donations and the growth of endowments over time and the spending power that’s given us is transformative for the University.”

As a result of the healthy endowment pool, Notre Dame is also able to attract the very best and brightest faculty. The endowment supports professorships, scholarship and research. The University is now among the world’s preeminent research institutions, with research expanding in areas cancer, environmental change and global health. Also powered by the endowment are student clubs, libraries and academic programs.

“Notre Dame students have unbelievable access to the world. More than 75 percent of Notre Dame undergraduates spend some time overseas, whether that’s for a summer, a semester or a year. There are 48 programs in 26 countries. When I was a student in the eighties, most of us did not think about going to an international program. There were only three or four really popular ones.” 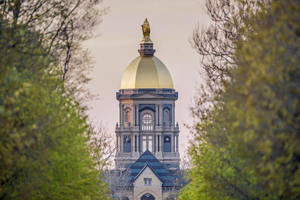 "Universities and colleges have carefully and intentionally built up their endowments so that their income provides extensive financial aid to talented young people who could not otherwise afford such an education without incurring crippling debt."

Malpass calls endowments the financial lifeblood of private institutions like of Notre Dame. Collectively, Notre Dame has more than 6,500 endowments in its pool. By design, endowments keep the principal amount of the donation intact while using the investment earnings to support various aspects of the University’s mission.

“The annual draw from the pool represents almost 30 percent of the University’s operating budget,” said Malpass.

The net income on the endowment is coming under closer scrutiny from the federal government with the new tax law imposing an excise tax of 1.4 percent on it. A select few private universities with large endowments, like Notre Dame, face the tax. 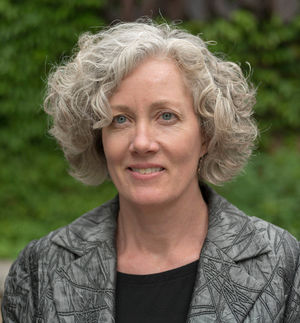 Elizabeth Zepf, senior financial analyst for the Snite Museum of Art, posted her feelings on the U.S. Treasury's web page for public comment this week.

“People are still trying to interpret the regulations, which are not as clear as they should have been,” Malpass said. “It was a product of a very split Congress. My hope is that it’s repealed because it’s a very un-American excise tax.”

Among those interpreting the regulation is the U.S. Department of the Treasury, which oversees the IRS. The Treasury's public comment window is open through October 1.

Elizabeth Zapf, senior financial analyst for the Snite Museum of Art, felt compelled to leave comments on the Treasury’s site this week. She led her post with the impact the tax will have on students.

“These universities and colleges have carefully and intentionally built up their endowments so that their income provides extensive financial aid to talented young people who could not otherwise afford such an education without incurring crippling debt,” she wrote on treasury’s web page. “These intelligent, responsible and inspired young people are the future of the United States and the world.”

"Repeal this excise tax for the health and future of our communities and our country."

She added that income from these endowments fund educational and cultural necessities in research that ranges from science to sociology, from psychology to medicine. “This research enables us to continue to improve the future of the United States and the world,” she said

And Zapf described how the tax could impact the Snite Museum and the South Bend region.

Malpass believes that with the general uncertainty about the tax, the Treasury is genuinely interested in hearing what taxpayers have to say.

“After digesting the public comments, the regulations will be issued in final form,” he said. “Presumably this will be done in time to be applicable for the tax relative to fiscal year 2020.” Click to learn more or to comment on the U.S. Treasury's web page.

If the tax takes effect, as expected, Malpass said, “You’re going to have millions of dollars flow out to pay this tax every year. That money could be used instead for financial aid or used for scholarship and faculty resources and support.”

The University will not dip into the principal to make up the difference.

“You don’t want to cannibalize your future,” he said of the endowment pool. “It violates the basic principle of intergenerational spending. It’s really going to be more about getting new endowments, investing them, and then those funds provide additional resources for students. That’s how we’re going to fill the gap.”

Click to read what Notre Dame President Rev. John I. Jenkins, C.S.C., has written on the subject.