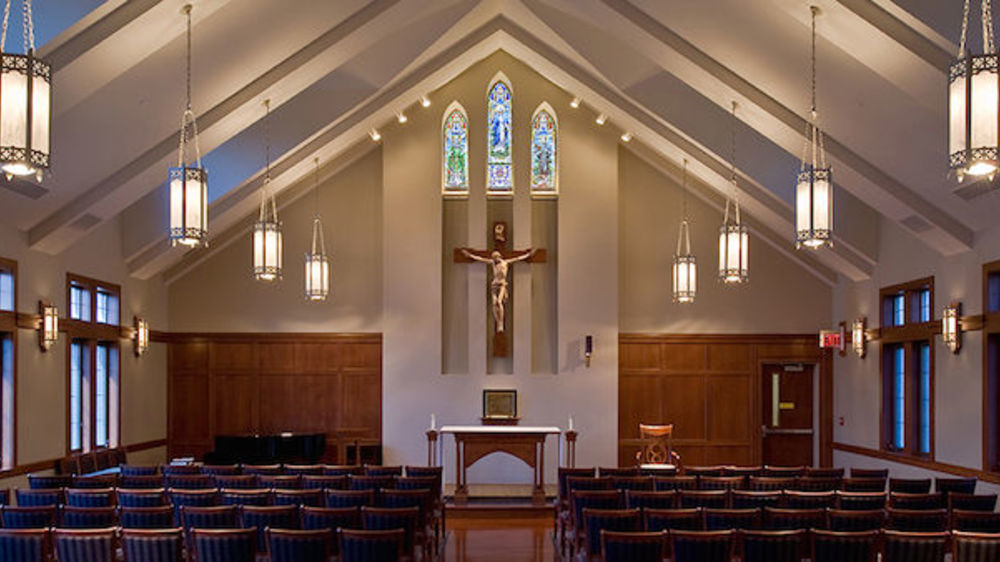 Last fall Nhat Nguyen, rector of Duncan Hall, noticed that the light fixtures in the hall’s Saint Walter of Pontoise Chapel were still equipped with inefficient incandescent light bulbs. And each fixture also had a 500-watt bulb at the bottom, which was both inefficient and uncomfortably warm when standing or sitting underneath.

Nguyen reached out to the Office of Sustainability.

With the help of Bob Werner, mechanical engineer with Facilities Design & Operations, and Mike Sullivan of Graybar Electric, the chapel received a lighting makeover.

When Duncan Hall was built in 2008, fewer options for sustainable construction existed and LED (light-emitting diode) bulbs were not widely used. LED technology has evolved rapidly over the last several years, and now that there are more lighting colors and applications, LED lighting is used extensively around campus.

The chapel’s sustainability update didn’t require new fixtures — it simply involved changing the type of bulbs used in each fixture. This allowed the chapel to remain as close to its original design as possible, and also kept the cost of the update very manageable.

Ten hanging light fixtures and twelve wall sconces were switched out from incandescent light bulbs to LEDs; the six spotlights will be changed to LEDs as they burn out.

Nguyen explained the importance of keeping the current lighting fixtures — each of the chandeliers and wall sconces, he notes, ties into architectural details within the chapel.

Along the chapel walls, there are replicas of the Stations of the Cross from the Basilica. At the bottom of each wall sconce is a cross that matches a cross on the wooden frame of those replicas. There are details on the chandeliers that tie in with the wall sconces. Changing only the bulbs made the chapel’s lighting brighter and cooler without changing the design.

Kevin Jones, maintenance lead technician, and several members of the maintenance staff donated several hours of their time to replace the bulbs, so the cost of the project was just $935.

The upgrade will also cut labor costs. LED bulbs typically require replacement just once every 10 years — rather than one to two times a year with incandescent bulbs. The project will pay for itself in less than three years. The project will also result in an 80 percent reduction in kilowatts used annually, from 4700 to 900 watts. “It’s a win-win for everybody,” says Werner.

The Saint Walter of Pontoise Chapel was not Nguyen’s first sustainability project.

There are three beautiful stained glass windows in the chapel, and each window is equipped with its own spotlight. These lights were on twenty-four hours a day, seven days a week, every day of the year.

In September 2016, he submitted a work order requesting the lights be changed to an automatic timer. Now the lights are set to come on at sunset and turn off at 2 a.m.

Do you have an idea to help make the University of Notre Dame more sustainable? Contact the Office of Sustainability (green.nd.edu) at 631-2748, or email green@nd.edu.