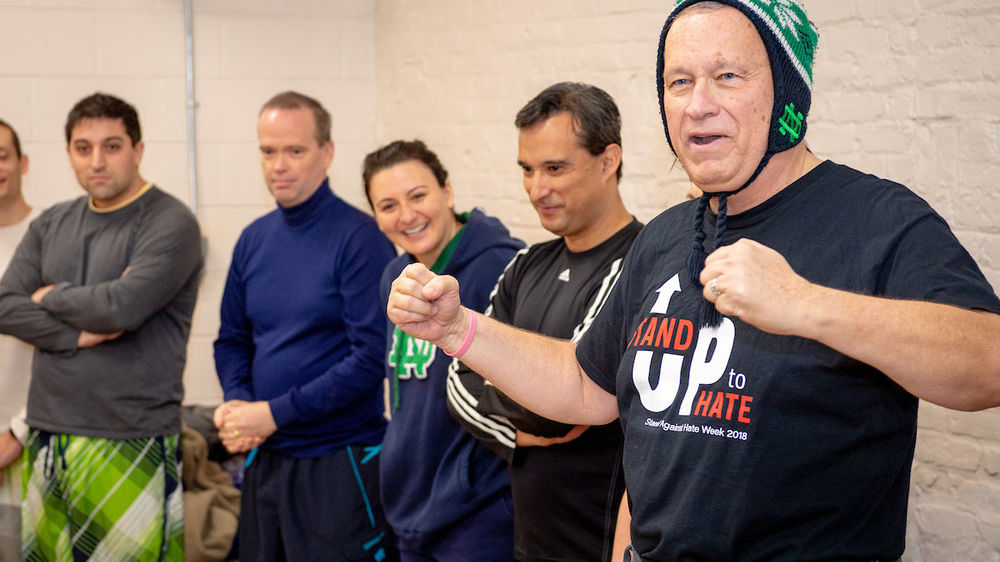 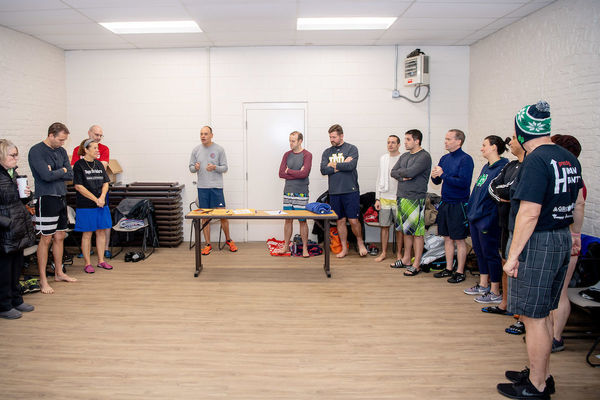 The ARCtic Plunge participants meet in the boathouse east of St. Joseph's Lake before taking the plunge (pictured below). Staff chaplain, the Rev. Jim Bracke, CSC, revs up the group with prayer and a pep talk (pictured above).

What inspired 18 grown men and women to jump into the frigid water of St. Joseph’s Lake before sunrise on a mid-December morning? Community building and a good cause.

The Rev. Jim Bracke, C.S.C., staff chaplain, was among the brave souls to run into the lake. Toweling off in the boathouse afterward, he called the plunge “exhilarating! It was a wake-up.”

Also on the beach at 7:30 a.m. was a cheering section of at least 10 staff members and administrators such as Mike Seamon, vice president for campus safety and events management, and Dolly Duffy, associate vice president for University relations.

Jason Williams, director of information security and compliance, is one of the event organizers.

“The idea for the plunge came from a leadership cohort retreat we did in the fall of 2016 called Authentic Relationship Community, or ARC,” says Williams, explaining the origin of the ARCtic Plunge.

“As part of the retreat, our group of 15 did a polar plunge into Lake Wawasee (Kosciusko County). It was a great community building experience that some of us wanted to repeat on campus in December,” he recalls.

Paul VanDieren, associate controller of tax and payment services, says, “Jason talked just enough other crazies to join him in bringing a plunge to campus in December. It’s amazing what normally reasonable people will agree to while on retreat.” 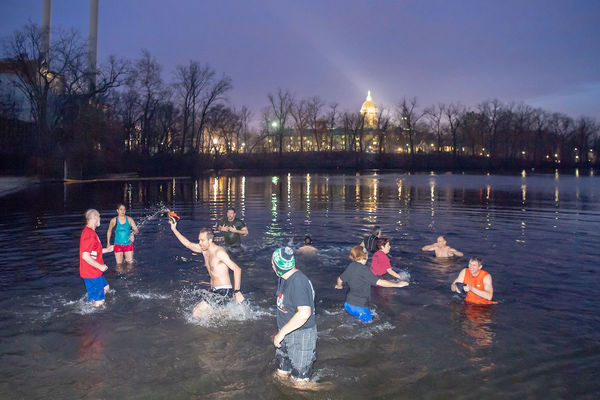 So later that year, the hardiest members of the cohort took the leap into the campus lake for the first ARCtic Plunge.

“It was very cold, and only four of us went in,” Williams says.

In 2017, the group decided to open the second annual event to the campus community, challenging co-workers to take the ARCtic Plunge. They also made it into a fundraiser for the food bank. Why the food bank?

VanDieren explains, “The first year of the ARCtic Plunge, one of the cohort members who decided not to participate because the temperature was in the single digits just happened to be scheduled to volunteer at the food bank later that day. To alleviate his guilt, he offered to make a financial donation to the food bank for every swimmer. That’s how it became the charity associated with this event.”

“Our main focus of the campus plunge is to provide a bonding experience. Raising funds for the food bank is in the spirit of Notre Dame and a great side benefit,” says VanDieren.

Since the event was created by a leadership cohort, it may not be surprising that the ARCtic Plunge Challenge has a mission statement: To cultivate a culture of authentic human interaction by leading a collaborative, engaging, and inclusive activity unique to the Notre Dame family and beneficial to our surrounding community.

Bobbie Anderson, accounts payable assistant, had only one complaint about the plunge. “I was hoping for colder weather. Where’s the sleet and snow? It wasn’t arctic enough.”