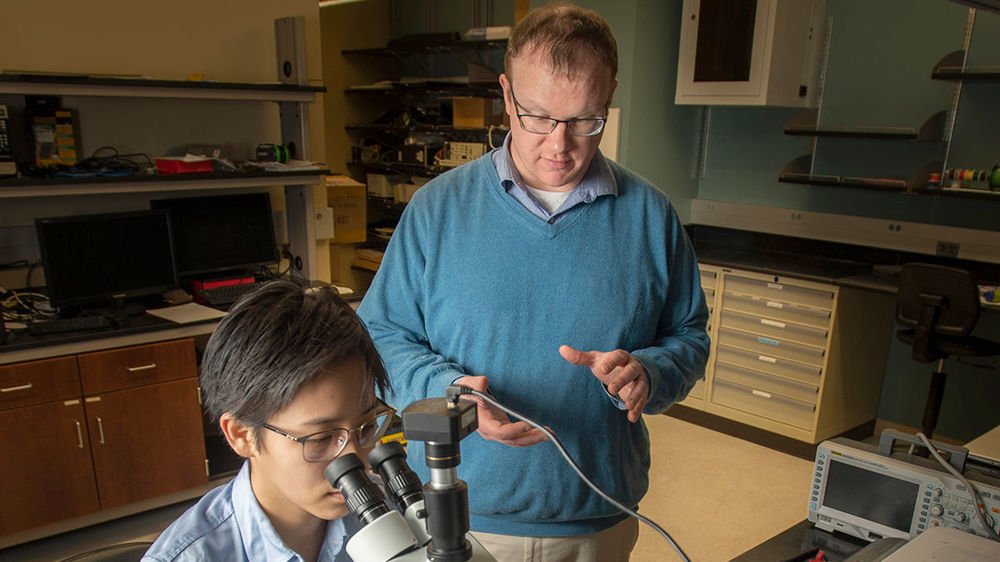 At the University of Notre Dame, a research team led by Thomas O’Sullivan, assistant professor of Electrical Engineering and an expert in biomedical optical sensing and imaging, hopes to revolutionize breast cancer treatment by developing the first “smart” breast marker clip.

“As researchers, we were seeking a way to provide the most relevant and timely information possible to indicate that a tumor or metastasis was either responding to or becoming resistant to treatment,” said O’Sullivan. “Since marker clips were already routinely introduced in breast tumors, we began to envision ways to create ‘smart’ versions of these markers that could provide that information in near real-time so they could be used to optimize treatment at the earliest possible opportunity.”

About the size of a sesame seed, breast marker clips are commonly placed in the body during a biopsy, where breast tissue was removed. The biologically-safe clip “marks” the biopsy area and can be seen on post-biopsy mammograms to more quickly identify the affected tissue.

O’Sullivan and his team are developing a wireless, low-power, light-based sensor the size of standard breast marker clips. However, instead of simply marking the place of the abnormal tissue, the sensor continuously measures the composition of the surrounding breast tissue — without potentially toxic contrast agents or ionizing radiation — and relays it to a handheld device, similar to a glucose monitor.

The clip could also be used to monitor benign breast lesions that are at high risk of becoming cancerous. This would decrease the number of mammograms and scans employing radioactive tracers that a woman would typically need to undergo for her physician to obtain comparable information about a lesion.

In addition to fabricating a functional smart breast clip system, the team will demonstrate the safety of the clip — to ensure that the low-power device does not affect tumor growth — and, using mouse models, validate that the smart clip can track how a tumor responds during chemotherapy.

The team includes Alicia Wei, a student in the Bioengineering Graduate Program; Siyuan Zhang, the Nancy Dee Associate Professor of Cancer Research at the Mike and Josie Harper Cancer Research Institute and associate professor of biological sciences at Notre Dame; and Joshua R. Smith, the Milton and Delia Zeutschel Professor in Entrepreneurial Excellence and director of the Sensor Systems Laboratory at the University of Washington.

Originally published by Nina Welding at news.nd.edu on February 28, 2020.