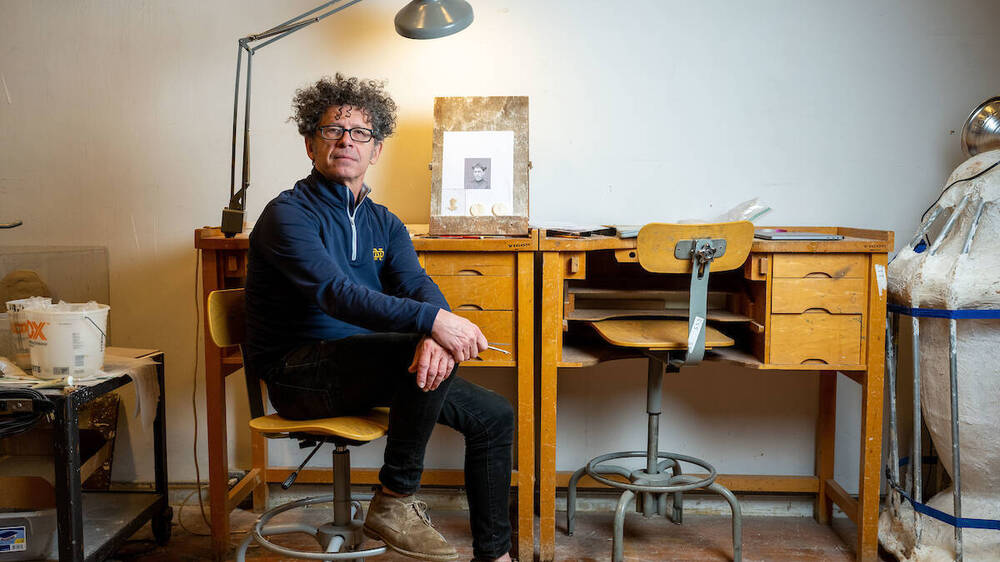 Sculptor Miklós Simon’s studio in the Holy Cross Annex building near St. Mary’s Lake is every bit what you’d imagine. It’s gritty, dusty and scattered with an almost macabre tableau of parts and pieces — of molds and busts perched in corners, of heads and hands resting on tables, of saints and priests peering from shelves high and low.

But in late October, a thin disk of white clay rested on an angled easel along one wall. Only 2.5 inches in diameter, the disk contained a delicately sculpted portrait of the first science teacher at the University of Notre Dame: The Rev. Joseph Celestine Basile Carrier, C.S.C. Father Carrier’s eyes and youthful jawline jut from the bas-relief sculpture — a type of sculpture created on a two-dimensional surface with features that don’t stand too far, reminiscent of a coin.

In 2022 Simon, a ’91 MFA graduate, was selected to create the medallion for the Rev. Joseph Carrier, C.S.C., Science Medal, the new award from the College of Science that honors world-class achievement in any field of science. Nobel Laureate Donna Strickland, a physics professor at the University of Waterloo, was awarded the inaugural Rev. Carrier Medal in November.

“When we saw examples of the other three-dimensional portraits Miklós had produced, he became the clear choice to create our Carrier Medal,” said Tammi Freehling, director of communications in the College of Science. “We could have worked with any number of vendors. But having the Carrier Medal created by Miklós, with his fine art approach to sculpting, makes the medal itself a work of art. And his long-standing connection to Notre Dame makes the medal that much more special.”

After he was commissioned for the piece, Simon dove into the project. Aiming to please — even though he has been sculpting professionally for decades and received hundreds of commissions and accolades — he quickly began the project by developing the medallion in clay.

“This will probably go through six versions between clay and plaster to refine it, adding the fine details of the eye and every detail,” Simon said. “As I work in the clay, I’m already thinking about what I have to change before we get to the plaster stage, which is a little more precise.

“I’m comparing the distance from here to here,” he explained, using a rounded needle sculpting tool to point from the bottom of the ear to the chin. “And the text is quite elaborate, so I will redo certain things on plaster.”

Simon was born in Zalaegerszeg, a city in western Hungary, and attended the School of the Arts at the University of Pecs in Hungary and the Academy of Fine Arts in Budapest before he immigrated to the United States. He earned a BFA degree from the School of the Art Institute of Chicago, and landed a competitive Riley Fellowship at the University of Notre Dame for his MFA.

But art chose him, rather than the other way around.

“When I was a kid, I found some river clay in gravel that was delivered for a building, and I basically picked it up and made an ashtray,” he said. “My aunt told me I’m going to be a sculptor, but I said, not even if I die will I be a sculptor.”

That didn’t stop him from joining the drawing club at school when he was 12, just two years away from a critical decision. Because schools in Hungary were divided by specialty, students decided upon future careers by age 14. He had considered chemistry, medicine and winemaking, along with art. When he interviewed at the art school and submitted his drawings, he was quickly accepted, and dove in with enthusiasm.

After completing his Bachelor of Fine Arts, Simon was accepted into the University of Chicago for his master’s degree. However, he noticed a flyer about applying to the University of Notre Dame for his degree instead, with the potential for a full scholarship. The prospect intrigued him. Simon wound up applying late, but the University allowed him to interview anyway.

Unfortunately, the day didn’t go as smoothly as planned.

“I got confused about the time change from Chicago, so I was an hour late, and I also went to Saint Mary’s by accident,” he said. “I was surprised to see all the women walking out of buildings, since I knew Notre Dame used to be an all-boys university not too long prior.

“So I ask where the arts building, Riley Hall, is and someone’s like, ummm … you have to go across the street,” he said, laughing at the memory. Despite the blunders, his interview went well and he was accepted.

He loved his time at Notre Dame, describing courses in art history led by Kathleen Pyne, now professor emeritus, and Craig Adcock, now at the University of Iowa, as transformative. Pyne taught students that many in the world praise Euro-centric art traditions, while other cultural art traditions, including American art traditions, have often been dismissed. Through both Pyne and Adcock, Simon studied the works of important painters and sculptors including Hiram Powers, Daniel Chester French, Augustus Saint-Gaudens and Thomas Eakins, all of whom informed Simon’s sculptural style.

During the program he was advised by the late Rev. James Flanigan, C.S.C., associate professor in the Department of Art, Art History and Design, and Rev. Austin Collins, C.S.C., a professor of sculpture at Notre Dame who is also vice president for mission engagement and Church affairs. Simon sculpted the crucifixes for the altars at Knott and Siegfried halls as a first-year student, an honor he described as a humbling experience.

“Fathers Flanigan and Collins were both encouraging and supportive in my exploration of the sculpture medium, and furthermore guided my growth as educator in the field of art and sculpture,” Simon said.

During his third year, Simon was chosen as one of the artists to create a bas-relief for the United States Navy Memorial in Washington, D.C. Since graduating, he has taught and lectured throughout the world including at both of his alma maters as well as the University of Chicago and the Chicago Academy for the Arts, and he is currently an instructor in the Art and Art History Department at Columbia College, Chicago.

At Notre Dame, he’s kept busy with a variety of sculptures and reliefs that grace many of the buildings on campus beyond Knott and Siegfried halls, even including the Grotto. (There’s possibly a baby Jesus sculpture somewhere on campus with the face of Simon’s son as an infant, but we’re not telling.)

“He’s in great demand and is really a dedicated artist,” said Father Collins, who recommended Simon to Freehling during the artist search process for the College of Science. “It’s really hard to find a good figurative sculptor today, and he’s in that arena, doing high-quality, figurative artwork.”

Though Simon has completed many large sculptures, small sculptural forms intrigue him just as much. For the Carrier Medal medallion project, Simon drew from his 28 years of experience as a freelance sculptor for the United States Mint.

“Not many people do this type of small detail work,” he said. “I’m not bragging, but it’s just the way it is; most sculptors don’t do this.”

After building the medallion from clay, he created a plaster mold that he refined in both the positive and negative, because the medallion has dimension. He sent the final plaster sculpture to Dangios Fine Arts and Casting, in Chicago, to be cast in zinc with semi-precious gold plating.

Ten medallions were cast before the Carrier Medal ceremony; one was awarded to Strickland, and another given to Rev. Robert Dowd, C.S.C., religious superior of Holy Cross Priests and Brothers at Notre Dame, to acknowledge the Holy Cross order and their contributions to science at Notre Dame. The remaining eight will be awarded over the next eight years.

“The attention to detail is astounding — Miklós expertly translated Father Carrier’s portrait from a grainy black and white image to a three-dimensional relief portrait,” said Freehling. “The care and intricate detail put into the finished medal is more than we could have hoped for. And it will stand the test of time, being treasured by Carrier Medal awardees for years to come.”

Simon said that while he was honored to create the medallion for the College of Science, he enjoyed working with Lotta Barnes, the college’s visual communications senior assistant director, who envisioned the layout. While sculpture is an art, there’s science involved at nearly every turn, from the clay and plaster mixtures, to the tools used, to the final casting process.

“It is simply humbling to create a work which celebrates the history of our University and commemorates our pioneer faculty, and will be received by world-renowned scientists,” Simon said.