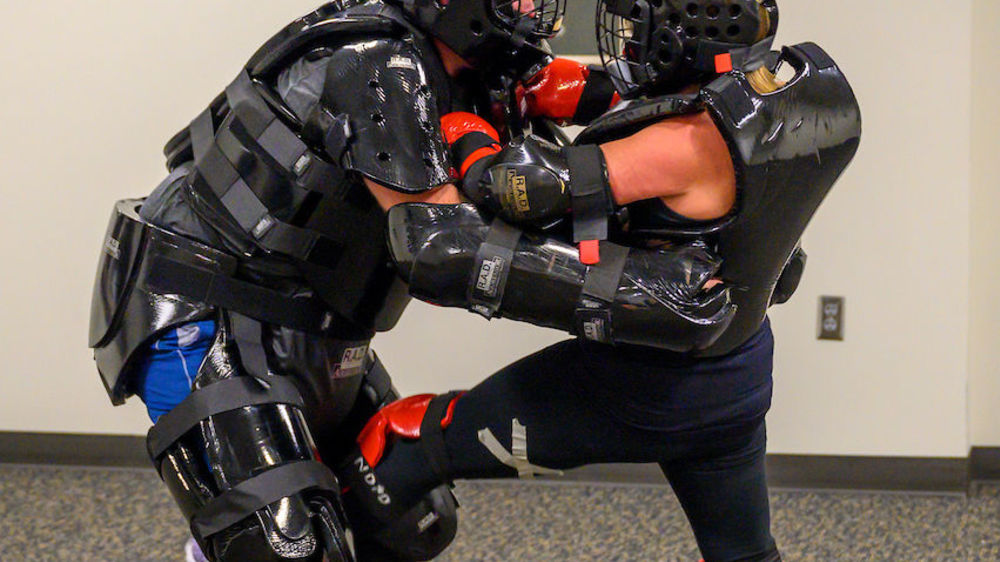 You’re standing at an ATM at dusk, with your back to the street. You sense someone coming up behind you. Are you prepared to defend yourself if necessary?

Roberta White, adviser to Paul Browne, vice president for public affairs and communications, decided to learn how to protect herself after she began to travel more in her current position. “As a woman traveling alone,” she says, “learning how to defend myself in unexpected situations was important to me.”

White signed up for Rape Aggression Defense, or RAD, training through the Notre Dame Police Department, which has been offering this training for women for several years.

Capt. Rob Martinez, captain of crime prevention, outreach and safety with the NDPD, is a certified RAD program instructor and the current RAD program manager on campus.

“We engage our students with general personal safety awareness education, equip them with some self-defense techniques and empower them to take ownership in their personal safety so they are prepared if they ever find themselves in a threatening situation,” he says.

White enrolled in the six-week class, which involves time spent learning about self-defense, followed by hands-on exercises that prepare participants to fight attackers if needed.

“The first thing I learned was basic awareness, prevention and risk reduction, so I didn’t become a victim,” White says. “It was simple things like not being distracted by my cell phone when walking alone, locking car doors, keeping my home’s outdoor lighting on and being aware of my surroundings.”

Her favorite part of the class, she says, was seeing the growth in both herself and her classmates.

“During the first hands-on class, we were all hesitant when we were learning to resist and strike back. I was amazed at the confidence I felt and witnessed by the end of that first class. We went from feeling timid and frightened to powerful and self-assured,” White says. “That mental and physical confidence continued to grow with every week of training and practice.”

The simulation attack and defense exercise, White says, was more realistic than she had expected.

“Even knowing ahead of time that I was going to be attacked, I was surprised at the adrenaline surge I had,” says White, who didn’t come down from that rush for hours. “My moves became instinctual, animal-like. I knew that if I was going to go down, I would go down fighting. It was terrifying and exhilarating at the same time.”

Seeing his students’ ability to step up to the challenges is one of Martinez’s favorite parts of teaching the class.

“Personally, my favorite part of RAD training is seeing a student who initially may be reluctant or have some reservations about signing up for the training, then seeing them empowered to participate in our safe and totally optional training scenarios, where they put together all that they have learned in the class,” he says. “It’s quite powerful to see.”

Although White hasn’t used any of the defensive techniques she learned and hopes to never have to, she says she’s more aware and self-assured after taking the class.

“One of the things I learned was that women taking a self-defense course significantly reduce their chances of becoming a victim,” she says. “Knowing I have this knowledge and ability to defend myself gives me an advantage over an aggressor and is incredibly reassuring.

“I love that Notre Dame offers this program on campus and highly recommend it to others. Everyone should be prepared to protect themselves. I like the fact that the basic techniques can be learned with a relatively short investment of time, but the skills will last a lifetime.”

Notre Dame RAD classes are open to Notre Dame, Holy Cross and Saint Mary’s women students, faculty and staff and their families. The spring session will be held from 6–8 p.m. Thursdays from March 19 through April 23 at Rockne Memorial. To sign up, call RecSports at 631-4818 or visit recsports.nd.edu/classes/instructional-series.