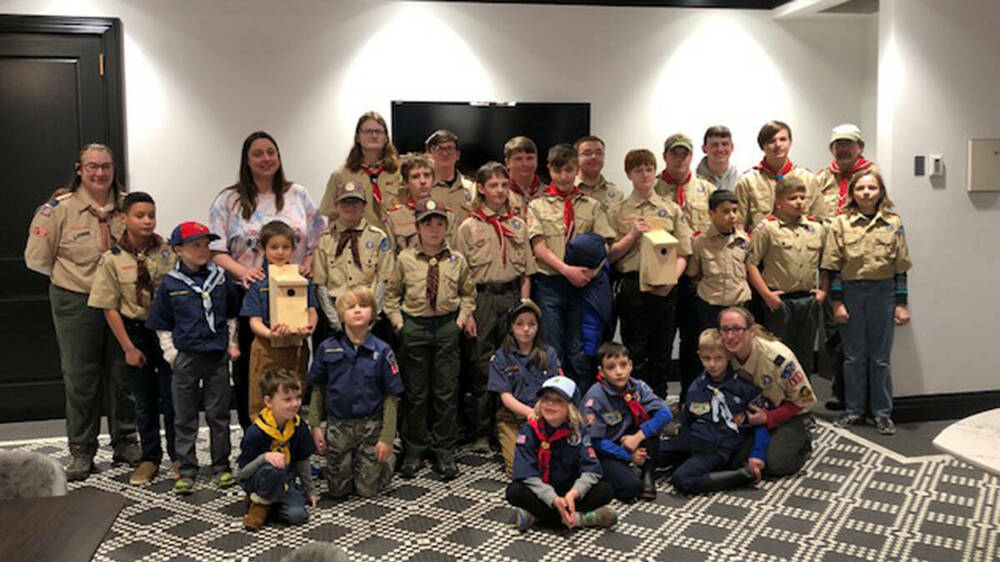 The University of Notre Dame is partnering with the Boy Scouts of America, LaSalle Council, to support the eastern bluebird population at Warren Golf Course, a certified Audubon Cooperative Sanctuary.

Led by Scoutmaster Adam Heet and Cubmaster Michaela Duffy, members of Troop 122 (Osceola) and Pack 108 (Mishawaka) recently built 14 new nesting boxes for the birds — replacements for some of the 56 existing boxes at Warren, many of which are weather damaged and ready for the wood pile.

The older scouts of Troop 122 (grades six and up) helped the younger scouts of Pack 108 (grades K-5) assemble the pine boxes from patterns and materials supplied by golf course staff, including Kathy Maloney, assistant office manager for Notre Dame Stadium and grounds, and Matthew Yops, superintendent of golf courses at Notre Dame.

The project allowed the scouts to complete necessary tasks, or “adventures,” to advance in rank — all while engaging with the community in a positive way.

“We have thoroughly enjoyed this collaborative, hands-on project, which has fulfilled our scouting goals/requirements in three general categories: service, learning and conservation,” said Pack 108 leader Duffy, a professional specialist in scenography at Saint Mary’s College.

Generally speaking, the Scouts prepare young people — boys as well as girls — to become responsible and engaged citizens who make moral and ethical choices based on universal values such as loyalty and kindness, for the benefit of both the individual and society.

“One of the things we push in Scouts is trying to make sure that the community is better by us existing,” said Heet, a digital projects specialist with the Hesburgh Library’s Navari Family Center for Digital Scholarship. “So it’s not just us getting together as a social club to go camping; we’re trying to make our community better.”

The nesting box project originated with a chance encounter between Heet and Maloney at the Osceola Bluegrass Festival. Heet was there picking up trash with Troop 122. “We stay on the park grounds all weekend long and pick up litter and empty trash cans as a service project,” he said. Maloney, a former scout leader herself, was volunteering at the festival.

“I was a den mother and we made bird houses,” Maloney, an avid birder who is active in the local chapter of the Audubon Society, said, “so I thought I would go over and talk to them and see if they had any interest in building nesting boxes for the golf course.”

The course had lately fallen behind on that task because of retirements and other staffing changes, Maloney said, and risked losing its status as an Audubon Cooperative Sanctuary, an important, if symbolic, component of its overall stewardship of the property.

“Especially with the weather in this area, the nesting boxes go through a lot with the summer moisture, then the cold driving winds of winter. It takes a toll,” said Yops, the superintendent of golf courses. “They’re just pine boxes, they’re not very heavy duty, so maintenance is very important.”

Fortunately, the Scouts were happy to lend a hand.

“They did a fantastic job,” Maloney said.

Added Maloney, “Better yet, the Scouts found it very rewarding working on them.”

Situated north of campus between Douglas Road and the Indiana Toll Road, Warren Golf Course sits on 250 wooded acres, expertly preserved as wildlife habitat for birds and other animals. The course is home to the Notre Dame men’s and women’s golf teams and hosted the 2019 U.S. Senior Open. It is among the best public golf courses in the state.

Led by Dan Brazo, former manager of athletic facilities at Notre Dame, course staff began preparing the property for bluebirds shortly after it opened in 1999, starting with 25 nesting boxes in 2000 and expanding to 56 in 2008. Today, each box produces an average of 1.5 fledglings annually.

About the size of a mailbox, each box consists of eight pieces of wood assembled with screws and caulk into a small rectangle, with a circular entry hole at the front. Each box sits atop a narrow metal pole, sprouting here and there like upright saplings from the long fescue between fairways.

The eastern bluebird is the only bluebird species found in Indiana. It is about the size of a sparrow, with blue, orange and white feathers. It prefers open woodlands, farmlands and orchards, making golf courses an ideal habitat. Its diet consists mostly of insects.

A favorite of birders, the eastern bluebird was abundant in the U.S. until about the 1930s, when competition from invasive starlings and house sparrows, as well as loss of farmland, pesticide use and scarcity of winter food, led to its decline. At its lowest point, the population declined by an estimated 90 percent.

Today, thanks to conservation efforts, its numbers are on the rise. It is currently listed as a species of “least concern.”

According to Maloney, since the start of the nesting box program, approximately 2,000 bluebirds have hatched at Warren, accounting for a majority of the population in St. Joseph County. In fact, Warren is one of the few places in the county where people can see bluebirds year round, since they are less likely to migrate when they have a warm, safe place to shelter over the winter.

Already, Maloney said, she is looking forward to next year.

“I thought maybe the Scouts could burn their pack or troop number into the nesting boxes, and they seemed enthusiastic about that,” she said.

Heet, meanwhile, hopes to add an educational component to the project focused on local bird species — their habits, their diets, how and where to spot them.

Originally published by Erin Blasko at news.nd.edu on April 14, 2022.