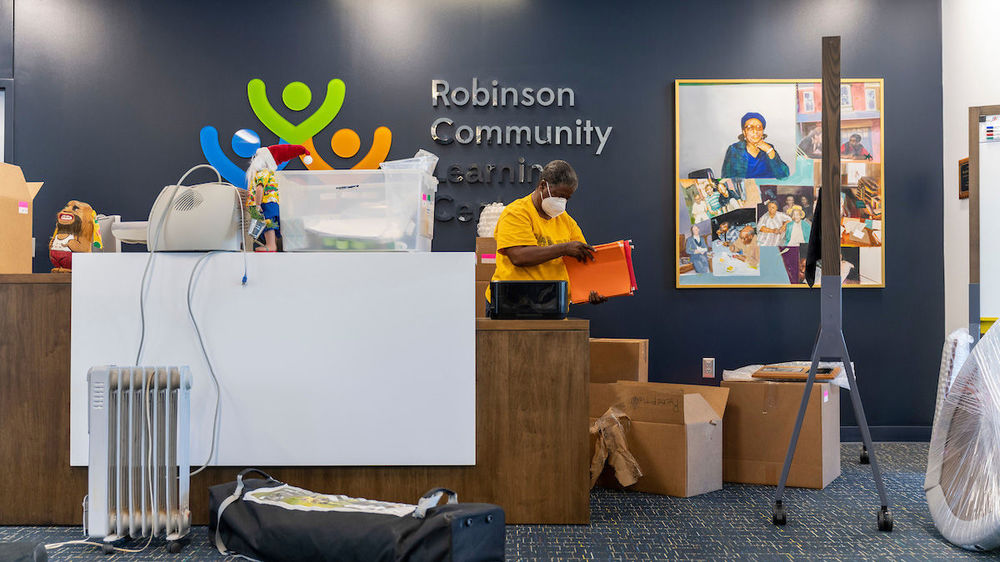 The University of Notre Dame Robinson Community Learning Center (RCLC) is settling into its new home, a sleek, spacious new building at Eddy Street Commons, after almost two decades in its original location, the cramped and aging former Goodwill store at Eddy and Howard streets.

The move, just across the street, marks a new chapter for the off-campus learning center, which recently celebrated 19 years in the Northeast Neighborhood, the traditional single-family neighborhood south of Notre Dame.

“It’s just everything we’ve dreamed of,” Jennifer Knapp Beudert, longtime manager of the RCLC, said of the new building. “It’s kind of mind-blowing how awesome it is.”

Notre Dame President Rev. John I. Jenkins, C.S.C., said, “The future of Notre Dame is inextricably linked to our neighbors and the health and wellbeing of their children. We could not be prouder of this milestone, the opening of a beautiful new building in which young and old alike will grow in community together.”

It’s been a long journey to this point.

At the time, the University had plans only to control the property with an eye toward future development. But in conversation with neighbors, it discovered a need for educational programming in the area and opened the RCLC there in 2001.

The University located the center in the former Goodwill space and named it for the late Renelda Robinson, a lifelong resident of and advocate for the Northeast Neighborhood.

In a section of the city previously starved for educational resources and community space, the center flourished.

But it soon outgrew the Goodwill space, with events and programs including language and tutoring classes, the Robinson Shakespeare Company and Take Ten, a conflict resolution program for area youth, in addition to clubs, lectures and classes for seniors and adults.

Plans for a new center began to emerge in 2018, but had to wait for financing.

Finally, in August of last year, the University broke ground on the new building as part of Phase II of Eddy Street Commons, the mixed-use development directly south of Notre Dame that includes hundreds of apartments and townhomes, in addition to office, retail and restaurant space and two hotels.

Part of a broader effort to revitalize the Northeast Neighborhood, Eddy Street Commons is a collaboration between Notre Dame and the Indianapolis-based real estate management and development company Kite, which graciously included space for the new center in Phase II.

Crews worked through the fall and winter to deliver the project on-time, turning it over to the RCLC for move-in last week, during the middle of the coronavirus pandemic. Alliance Architects of South Bend designed the building with input from staff and the community. Ziolkowski Construction, also of South Bend, handled the construction.

“I am delighted that the new Robinson Community Learning Center is completed,” Father Malloy said. “The center began as part of Notre Dame's efforts to be a force for good in the neighborhoods around the campus. With the support of so many wonderful local residents, we were able to bring together the young and the more experienced people of different racial, ethnic and socio-economic backgrounds, and faculty, staff and students with aspiring learners at every stage of education. The programming was well-developed, consequential but also firm. My thanks go out to all who have made this new facility possible. The best days of the center lie ahead.”

Situated at the northeast corner of Corby Boulevard/Howard Street and Eddy Street, the new building is designed as a hub with two spokes: a west wing housing back-office and storage spaces, and an east wing housing classrooms and other public and semi-public spaces.

The hub houses a spacious new lobby with a lounge and conference room and plenty of natural light courtesy of rows of windows on the north and south sides of the room. Windows feature throughout the building, a stark contrast to the windowless former Goodwill space.

At 12,600 square feet, the building expands on the original 7,600-square-foot center with the addition of a black box theater, a maker space-technology lab, a state-of-the-art early childhood classroom, a podcast studio, an industrial kitchen, an outdoor play area, multiple storage areas, including a dedicated costume room, and separate, secure entrances for visitors and staff.

A multipurpose room is wired with the latest audio-visual technology and adjustable lighting, while the library features wall-to-ceiling bookshelves and a 75-inch monitor. The metal stools in the maker space-technology lab attach to the undersides of the tables with magnets for storage.

The colorful mural that decorates the outside of the old building, painted and repainted over the years by area youth, will be replicated for the new building. Images from the mural already decorate the door signs in the new building — a small but meaningful nod to the past.

The interior color scheme is blue, green, red and orange, as voted on by the community.

Luella Webster, adult program coordinator at the RCLC and a lifelong resident of the Northeast Neighborhood, delighted in such details during a recent tour of the facility, a final walk-through for staff and AmeriCorps members before the move-in.

Down the hall, AmeriCorps members Samantha Musleh and Celine Marcos delighted at the size of the toilet in the children’s bathroom in the new early childhood classroom, a state licensing requirement.

“It’s so little!” said Musleh, who teaches English as a new language (ENL) to the children of adult ENL learners at the RCLC.

Even the ice maker, part of the spacious new kitchen, impressed. Opening the lid to the maker, Webster squealed with delight and then clapped and danced at the sight of fresh ice, her smile evident even beneath a face mask.

The kitchen features other new appliances as well, including a refrigerator, freezer and six-burner stove, in addition to a fire suppression system. It will support the RCLC’s snack and meal programs.

Outside, the building features a combination of metal, brick and glass. A driveway leads behind the building from Eddy Street to the parking lot, which includes a pick-up and drop-off area for cars and buses. The outdoor play area, soon-to-be fenced, is on the east side of the building. It features its own secure entrance and exit from that wing.

“The big thing that struck me was how much this building has been created for us,” said Knapp Beudert. “We have the perfect black box theater space for our kids. We have this great maker space. We have a new early childhood center. We’ve got windows and green space. And it’s very professional looking as well.”

Staff will have plenty of time to settle into the new space. Programming there will not begin until later this summer because of the coronavirus. Until then, staff will continue to engage with kids and adults remotely. The Robinson Shakespeare Company recently staged a remote production of “The Taming of the Shrew” using Zoom. Musleh is reading bedtime stories to students over YouTube. Language classes and tutoring have moved online.

When the center does reopen, the wide hallways, spacious classrooms, multiple entrances and exits and separate bathrooms for visitors and staff will help to facilitate social distancing, something that would have been difficult in the former Goodwill space.

“With this new space, we have a better chance to offer programming during the pandemic because it’s bigger,” Knapp Beudert said. “It gives us opportunities to separate the kids and put the kids into different groups.”

Even so, she will miss the old building, she said, which is scheduled for demolition in the coming days as preparation for further Phase II development south of Howard Street.

“I’ve been here 10 years, and the relationships formed in that building really changed my life, not to mention the lives of others,” Knapp Beudert said. “There are so many memories there. It’s hard to imagine it will be gone.”

Moving forward, it will fall on the entire RCLC community to “maintain” and “highlight” those memories, Knapp Beudert said, and “work to continue the culture of the old building in the new building.”

“I’m confident that we can do that,” she said.

Originally published by Erin Blasko at "news.nd.edu":https://news.nd.edu/news/robinson-community-learning-center-completes-move-to-new-expanded-facility-at-eddy-street-commons/ on June 15, 2020.