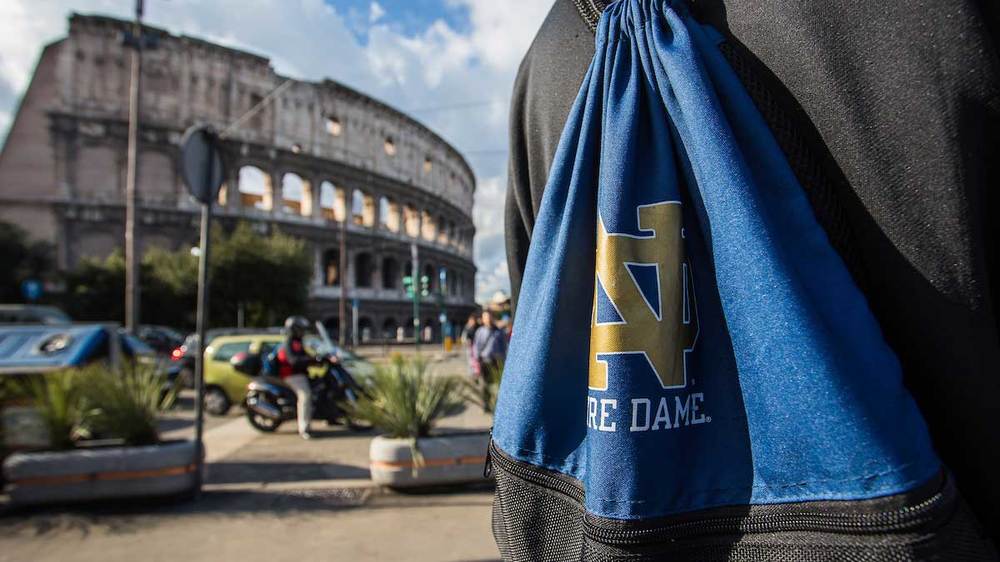 Early in the evening on Friday, Feb. 28, Mary Kowalski, vice president of travel services at Anthony Travel, was on her way to an Instant Pot cooking class when she received a call that the Centers for Disease Control and Prevention had issued a level 3 travel advisory for Italy.

She turned her car around and headed back to work.

Her colleagues at Notre Dame International (NDI) immediately sent her a spreadsheet of 106 students who were studying abroad in Italy, including their names, specifics on when they could leave, their home addresses and passport information.

Kowalski and her staff sprang into action as they worked side-by-side in the Emergency Operations Center (EOC) in Hammes Mowbray Hall. By the time all the staff members left that night, they had arranged tickets for everyone they could, and by 8:00 the next morning, they were back to book flights for a few remaining students.

Kowalski says, “I can’t thank NDI and the EOC enough for how they helped us execute this. They took into consideration everything from all different points of view; it was incredible to work with them.”

Ten days later, Anthony Travel continued to work with Jaime Signoracci, associate director of international travel and safety, and others at NDI as each of the Global Gateways and other study abroad locations closed.

By Friday, March 13, in response to the European travel restrictions that went into effect at midnight that night, Anthony Travel had arranged travel for all of the affected undergraduate students to arrive in the U.S. prior to the deadline, and by Monday, March 16, had arranged for the remaining undergraduate and law school students who were studying in other locations.

Both teams did whatever had to be done, including coming to work late at night, even working until 1:30 a.m. following President Trump’s proclamation that foreign nationals could not enter the U.S. if they had been to one of 26 countries that make up the European Union’s Schengen Area.

Signoracci says, “Mary and her team were unbelievable partners for us during these past several weeks. As I communicate and benchmark with my health and safety counterparts at other universities, many are still struggling to get their students out of countries all over the world. Without the Anthony Travel team, we would not have flown home all students, faculty and staff so expeditiously. It truly was a highly coordinated effort.” In total, Anthony Travel had made it possible for 545 students and 13 faculty and staff to return home within the required deadlines.

Despite a recent knee surgery, Vice President and Associate Provost for Internationalization Michael Pippenger made his way over to the Anthony Travel office in Flanner Hall to personally thank all of the associates who made the expedited travel possible.

"Times of crisis demonstrate the mettle of an organization and its people,” Pippenger says. “We are beyond grateful for our partnership with Anthony Travel and their dedicated professional team for their heroic efforts in securing complex international travel for our students, faculty and staff in such a compressed and anxious time.

“Their ability to communicate clearly, book tickets, alleviate nervous students and their families, and partner across time zones and continents was astounding and so appreciated! Congratulations to Anthony Travel for their phenomenal work."

Together, NDI and Anthony Travel have navigated through many crises, including major snow storms in London, the swine flu, civil unrest and volcanic ash, but nothing quite like this. While the University appreciates Anthony Travel’s unmatched level of partnership and responsiveness, Kowalski simply says, “I’m humbled we could be part of this experience.”