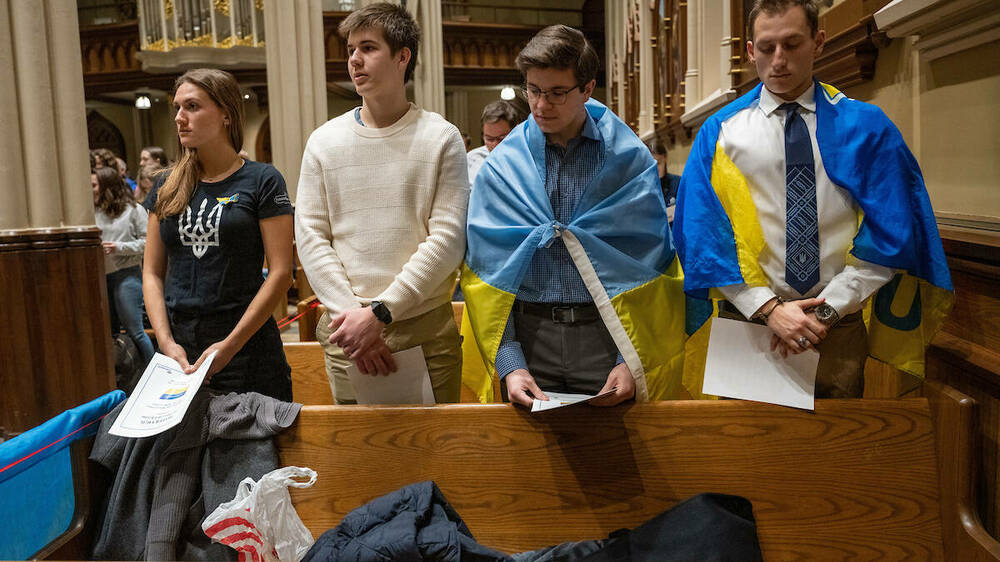 The campus community and guests attended a prayer service for peace and the safety of the Ukrainian people, held Monday, Feb. 28, at the Basilica of the Sacred Heart. Father Andrij Hlabse, S.J., a theology doctoral candidate and Ukrainian Byzantine Catholic priest, led the prayer service. Below is an excerpt from Father Hlabse's comments:

"One of my favorite sights at Notre Dame during my undergraduate years here was to look up at the Golden Dome with Our Lady on top, gleaming against the blue sky. Very often I would accompany that glance with a short prayer, as a friend had taught me to do. And I had ample opportunity to do so since I lived at Sorin College, just next door. There is a way in which that iconic site represents so much of the best of Notre Dame. The illumining gleam of faith and worship tied to a freedom to search out God’s truth, the truth about his world under an inviting sky. Truth, faith, freedom.

"Looking at the Golden Dome in that way still fills me with hope. In Ukraine too, there are numerous golden domes that stretch up to the sky. They adorn the tops of some of Ukraine’s most famous churches, and not only, they are monuments of faith, beacons of hope. In fact, in Kyiv itself, Ukraine’s capital, one of the most well-known churches is called St. Michael’s Golden-Domed Monastery. We can imagine how many people looked at those domes against the broad and blue Ukrainian sky with feelings similar to ours when we see Notre Dame’s Golden Dome gleaming against the firmament. And yet today, that consoling and inspiring site is occluded from Ukrainians’ eyes.

"Instead of glistening domes and bright blue draping, the sky is filled with the roar of the aggressor’s machines of war. The thick black smoke emanating from a city attacked below, the specter and even the stench of death. This cloud of material and human destruction hovers over the whole nation, obstructing its sight.

"We can thank God that here in the west, here at Notre Dame, such ominous clouds do not hang over us and the Golden Dome just next door. But even if these literal hazes of pain and suffering are not here, further west, the no-less-real clouds of moral consequences and fallout loom. We cannot flee from them. We cannot close our eyes and wish them away. And these clouds are as thick and dire as those that envelop the Ukraine capital."