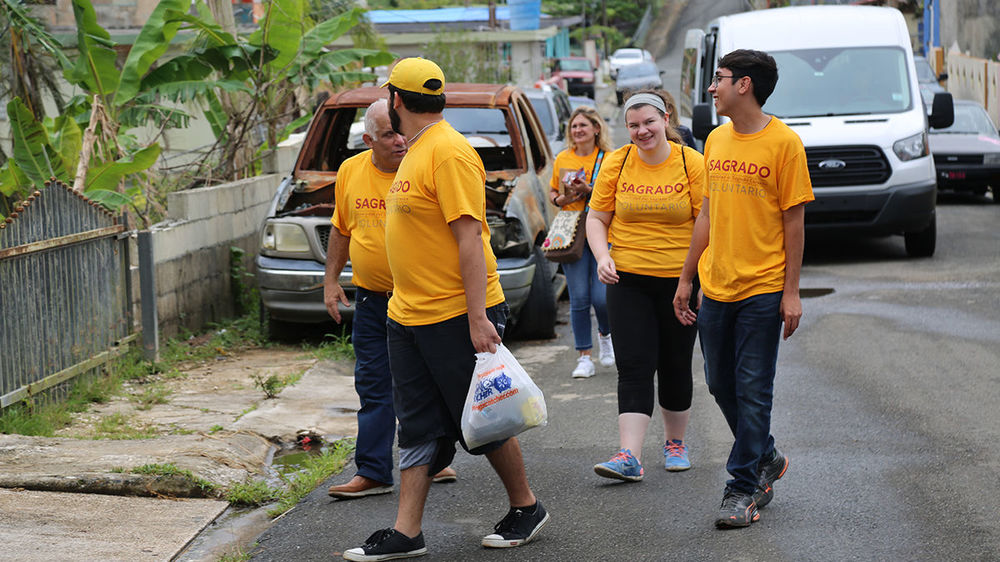 On the morning of Nov. 12, I traded snowy South Bend for San Juan, Puerto Rico. With the sun in the sky, temps in the 80s and crystal-clear ocean waters peeking out behind every corner, it was paradise — but it was a paradise with problems.

I had been sent to San Juan, just three weeks into my new job at Notre Dame Magazine, to report on the island’s recovery from Hurricane Maria, a devastating storm with maximum sustained winds of 155 mph.

We had heard that a Notre Dame grad, Gilberto Marxuach-Torros ’88, was coordinating relief efforts through the Universidad del Sagrado Corazon, where he serves as president. I was there to spend a week with the university and its students, an experience that would lead to “Puerto Rico Rising,” a feature story in the magazine’s winter issue.

Maria had blown through Puerto Rico nearly two months before I arrived, but, in many places, it seemed like it had just hit. No stop lights were working. Power lines lay strewn across roads every few blocks. No one I spoke to in my whole visit had power at home without a generator.

As a guest at Sagrado, I was one of the lucky ones. The campus had been cleaned up within days after the storm thanks to a massive volunteer effort, and the apartment where I stayed had grid power. Things certainly weren’t normal on campus — most buildings still lacked power, and improvised classrooms and student centers popped up in any open space — but I developed a comfortable routine.

Then the blackout hit.

On my fourth day in Puerto Rico, a power outage knocked out electricity to nearly every building on the island — my casita included. Marxuach’s secretary, Gloriana, was my de facto tour guide for the week, and when she learned my apartment had lost power, she insisted: I would stay with her for the night.

After my day of interviews, I tossed some clothes into a tote bag and hopped in the car with Gloriana.

At her house, I experienced a night of what the Puerto Rican people had been going through for months. Gloriana’s 6-year-old daughter crowned me with a plastic tiara and agreed to share her battery-powered fan with me. We cooked dinner on a camp stove set up in the kitchen, and we ate with no A/C, no TV blaring in the background and no lights on beyond the dining room — the generator the family ran during the overnight hours was for essential power only.

Everyone in Puerto Rico had a story like this during my visit, from the Ph.D. student who had no power to run his computer at home to the provost who’d had to move to a campus apartment for a respite from her sky-high generator bills. Three months later, too many people still have these stories. More than a quarter of Puerto Ricans are still without power, and more problems undoubtedly lie ahead. But, slowly, things are improving.

Gloriana texted me in mid-December with great news: Power had come back on at her house, just in time for Christmas. My new friends at Sagrado are insistent again these days, this time on the fact that I need to return to Puerto Rico — without camp stoves or blackouts.

The island still needs people to bring aid and to help communities rebuild. But it also needs people to stay in its hotels and visit its restaurants. The next time I head down to paradise, I hope to do all of the above.