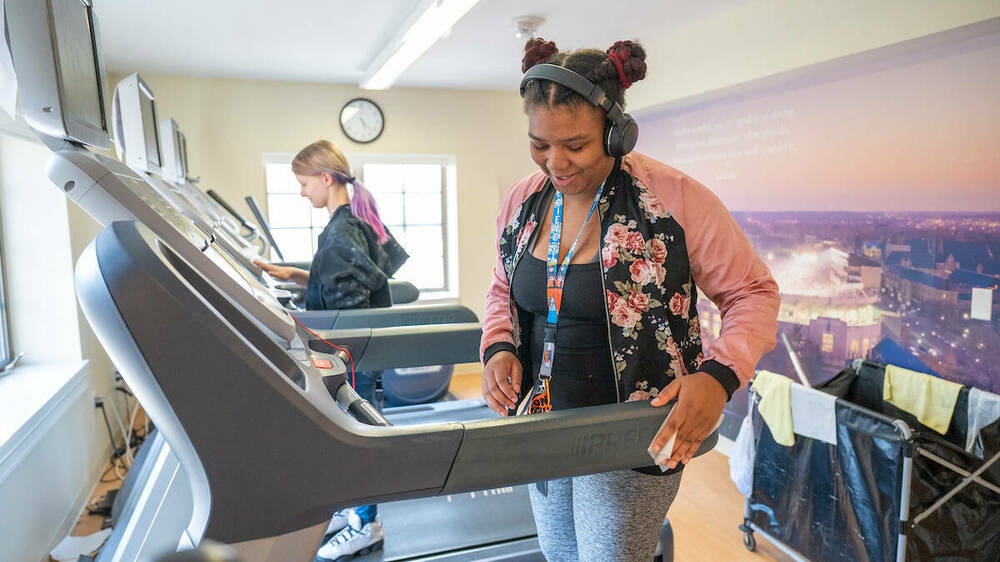 Notre Dame is not immune to the labor shortage the U.S. is experiencing.

It's been challenging for University Enterprises and Events (UEE) to find and retain talent for hospitality positions in the Morris Inn, the dining halls and the retail restaurants in LaFortune and Duncan.

“An immediate need of our division is to attract a larger, more diverse group of talented human beings to join our team,” Micki Kidder, vice president of UEE, said.

A couple months ago, Kidder invited colleagues across UEE to brainstorm ways to attract new talent. The team immediately thought of community partners. Maybe the University’s dilemma could be the solution to a challenge a partner faced. The Boys and Girls Clubs of St. Joseph County (BGCSJC), for example, is always looking for meaningful ways for teenage club members to spend their time. And, noted Ashley Zingo, director of UEE employee engagement, “Typically, when 15-year-olds get into a job, they’ll stay in that job for about four to five years.”

Notre Dame approached BGCSJC with the idea of a pilot program offering members, ages 15 and up, the opportunity to work part-time at Notre Dame as a way to gain important job skills. The club jumped at the opportunity.

“We struggle a little with getting teens to come to our program and stay, especially after the age of 15. So this is a really cool opportunity to not only get them engaged in a different way, but give them lifelong skills and prepare them for the workforce,” said Susie Brennan, BGCSJC’s director of strategic partnerships.

The pilot program, which included nine teenagers, launched in January and concluded at the end of March. Participants ages 15 to 18 worked in a variety of jobs in the areas of dining/food service, food retail and catering, earning $13.50 per hour for 10 to 13 hours of work per week, while learning about the University. Those who completed the program were guaranteed employment if they wanted to continue to work at Notre Dame.

“The program is a really tangible benefit to the University, the Boys and Girls Club and the South Bend community,” Kidder said.

In the first rotation, the teens worked in the dining halls — wiping down tables, working in the dish room, putting out the food and restocking condiments, napkins, etc. In the second rotation, they worked at the student centers in retail outlet units, like Subway, Hagerty Cafe and Modern Market. The third rotation brought them to the Morris Inn, where they learned about back of house operations (housekeeping) and running the front desk as well as assisting with catering and banquets.

“They worked Saturdays, Sundays and Mondays doing a hospitality job and had one educational opportunity a week,” Zingo said. The educational component included career counseling in areas such as customer service, resume building and interview skills.

On a recent afternoon after school, Leonya Emerson, 15, folded clean microfiber dusting cloths in housekeeping at the Morris Inn. It wasn’t her favorite task, but she appreciated the variety of jobs and workplaces she experienced during the program.

She also appreciated the career preparation. “My favorite places to work were Modern Market and North Dining Hall. At Modern Market, I would wrap cookies and sometimes I even got to make the pizzas,” Emerson said.

“The program is a new [stage in] life that’s beginning for me. I learned about job interview skills like communicating well and giving eye contact. We also learned about food preparation and how to cook food at the right temperature so people don’t get sick from it,” Emerson said.

The Adams High School student says she can see herself sticking with Notre Dame. She has heard about the great benefits, which includes the Ivy Tech Learning at Work program — a fully-funded benefit that offers an accelerated curriculum so regular full-and part-time staff can earn an Associate’s Degree in two years.

“I have thought about going to Ivy Tech for my college because my mom graduated from there,” she said, adding, “Going there for free would be amazing.”

Of the nine teenagers that participated in the pilot program, seven stayed on with the University.

The program has also received some national attention. The Boys and Girls Club of America highlighted it in its monthly “Feel Good Roundup,” distributed to BGCA employees. Perhaps it will be replicated elsewhere. BGCSJC is considering partnering with other local universities and colleges to start similar pilot programs.