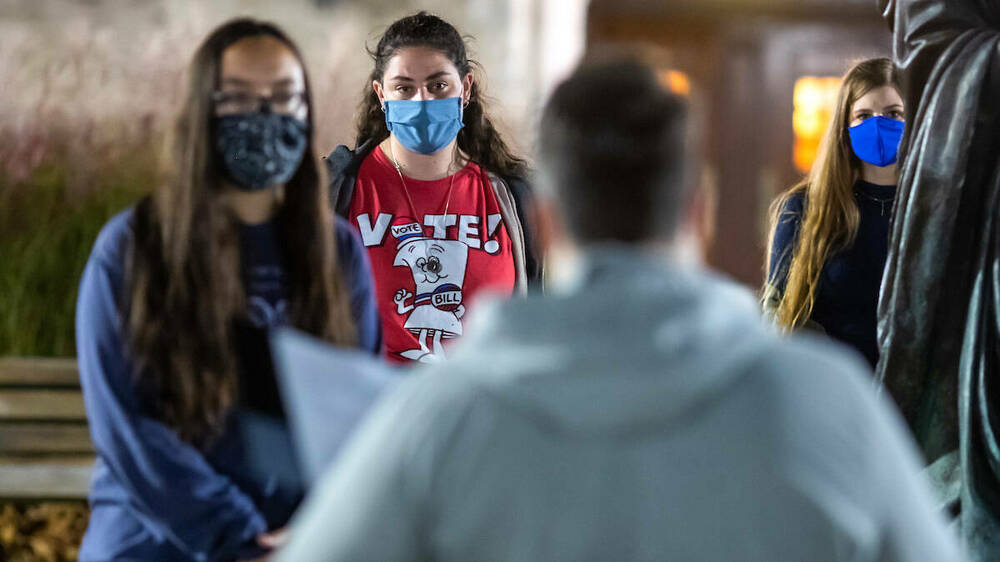 Nearly 72 percent of University of Notre Dame students voted in the 2020 election, up from 53.3 percent in 2016, according to the latest report from the National Study of Learning, Voting and Engagement (NSLVE). About 90 percent of Notre Dame students registered to vote in 2020, according to the report, up from 83.2 percent in 2016.

“For context, that’s well over 2,000 additional students who voted in 2020 compared with 2016,” said Jay Brandenberger, associate director of the Center for Social Concerns at Notre Dame, which supports political participation among students as part of its overall focus on social justice.

The numbers reflect an uptick in youth voter participation nationwide, driven by concerns over issues such as the pandemic, racial justice and the economy, as well as the closely watched presidential contest between Donald Trump and Joe Biden.

Nationally, 83 percent of students registered to vote (+7 points compared with 2016), while 66 percent voted (+14), according to the report.

Among Notre Dame students, undergraduates participated at a rate of 67 percent (+17 compared with 2016), and graduate students at a rate of 56 percent (+13). Students in health-related fields voted at the highest rate (75 percent), followed by those in natural resources or conservation (74 percent) and architecture and law (72 percent each). The rate of participation increased by at least 3 points (history), and by as much as 35 points (architecture), in every field of study.

Consistent with a nationwide trend, the share of students voting by mail increased from 56 percent to 70 percent amid the pandemic. Eight percent of students voted early, according to the report, while 6 percent voted in-person on election day. Not all states report voting method.

The numbers reflect “one of the most significant — both at Notre Dame and nationally — youth voter increases in history,” Brandenberger said, despite the challenges of the pandemic.

The Democratic Engagement Survey, a companion to the NSLVE, provides additional context.

A product of the Center for Social Concerns, the post-election survey asks students about their vote, their level of engagement in politics, their political views and their sense of the political climate on campus.

This year’s survey was conducted in the weeks following the election. It involved more than 1,300 graduate and undergraduate students from a randomly selected sample of more than 3,200 overall, or about one quarter of the student population.

Four out of 10 respondents identified as Democrat in the survey, while about a quarter identified as Republican and another quarter as independent/unaffiliated. With respect to the presidential contest, Democrats were more likely than Republicans to vote according to their political affiliation — 99.8 percent to 81.9 percent, respectively. Politically, women (59.4 percent) were more likely than men (34.5 percent) to identify as liberal or very liberal. More than 35 percent of men, a plurality, identified as “middle of the road.”

Another key takeaway from the survey: While students across the political spectrum valued political speech — even unpopular speech — many (78.5 percent of Republicans and 61.6 percent of Democrats) felt it was not always welcome on campus. The survey asked students about the frequency of political discussions in four settings — with professors, with friends, in the classroom and in residence halls. In each case, Democrats were more likely than Republicans to say they felt comfortable discussing politics.

“This data is important, for we need to prompt intentional education at Notre Dame about civic life and responsibility, for the college years are a salient period for the development of intellectual and moral habits that serve democracy,” Brandenberger said.

He noted that universities are key public resources that undergird democracy and should work to foster the skills of knowledge building across political divisions in a context of respect.

Combined, the two reports, the Democratic Engagement Survey and the NSLVE, paint a picture of the Notre Dame student body as very much engaged in the political process, and in sync with peers across the nation, especially those at other selective colleges and universities where political interest is often elevated.

“Notre Dame students do not appear to be monolithic in the issues that matter to them,” Brandenberger said.

Conducted by the Institute for Democracy and Higher Education at Tufts University, the NSLVE is the only study to objectively examine student and institution-level data on student voting and to share it with participating campuses. The study involves more than 10 million student voting records at more than 1,100 institutions from all 50 states and the District of Columbia. All the records are public.

For Notre Dame, it is an important tool for measuring the success of initiatives such as ND Votes and BridgeND, which aim to increase political engagement and participation and foster a welcoming climate for political speech on campus.

“We offer the report to prompt discussion across campus,” Brandenberger said, “and to foster intentional curricular and co-curricular support for building the skills of democracy.”

Originally published by Erin Blasko at news.nd.edu on January 21, 2022.