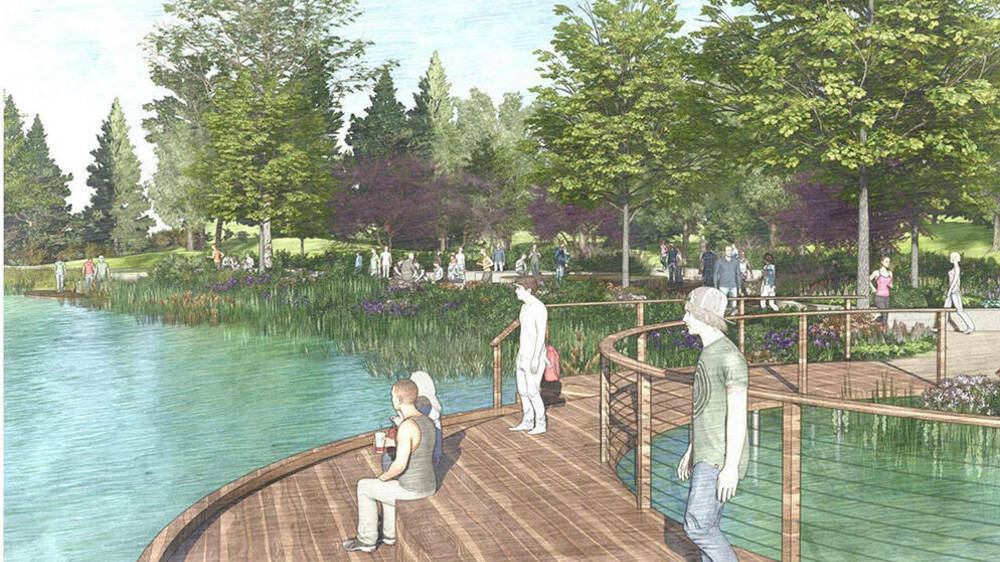 Shannon Cullinan, the University’s executive vice president, and Doug Marsh, University architect and vice president for Facilities Design and Operations, have lost track of how many times they’ve been asked about the project going on next to Saint Mary’s Lake.

“Many people thought we were just storing soil and earth-moving equipment on the site for other projects. That was certainly understandable as it looked that way for quite some time as we awaited the arrival of the specialty deep foundation subcontractor, whose work is now finally completed,” Marsh said.

What is going on is the construction of Our Lady of the Lake World Peace Plaza. The project should be completed in late spring.

“It will be a beautiful spot for people to relax and enjoy the natural setting by Saint Mary’s Lake, just west of the Grotto,” Cullinan said during the virtual town hall meeting with staff in the fall. “There will be a quiet water feature with a prayer for world peace inscribed in six languages.”

The donors are anonymous for now, described only as a Notre Dame family. More information will be available in coming months.

Despite initial concerns on the availability of steel, the construction of the Raclin Murphy Museum of Art project has progressed on schedule. The University broke ground in April 2021. “Wisely, our contractors procured the building’s structural steel frame before the supply chain tightened,” Marsh said.

The project is designed as a 132,000-square-foot complex to be constructed in two phases. Phase one will encompass 70,000 square feet devoted to gallery and teaching spaces, a café and retail space on the northwest corner of the Charles B. Hayes Family Sculpture Park on the south end of the campus.

“This is the largest capital project under construction at this time, and it will be an absolute treasure for faculty, staff and students, but also for the region, when completed,” Cullinan said during the town hall. “We want to get as many students from regional schools into the building as possible, and we will be able to accommodate buses in a seamless way that we’re not able to do right now with the Snite.”

There is also the hope the museum becomes a national attraction, welcoming visitors from far and wide.

While phase one is expected to be completed in summer 2023, the museum will not open right away.

“It will take six months to transport the art, build the exhibits and open the doors,” Marsh said.

Human Resources (HR) announced in October that the University would expand the Notre Dame Wellness Center to the north and south of its existing footprint. Ground was broken for the expansion in the late fall.

“The foundations are completed for both the north and south additions,” Marsh said in December. “Weather-dependent, we are anticipating to have the project completed this summer.”

The construction project will add 4,500 square feet to the 8,300-square- foot structure, of which 2,100 square feet will be renovated. The center, which stands at the northwest corner of Wilson Drive and Bulla Road, opened to faculty, staff and dependents in 2012.

The expansion will accommodate the significant growth in demand for emotional well-being services and provide more space for behavioral health providers. It will also allow HR to expand offerings in the areas of physical therapy, pharmacy and occupational health. The center will continue to be operated and staffed by Premise Health. HR expects minimal disruption to the center’s services during construction.

In the fall you may have noticed scaffolding draped around Washington Hall. Marsh said that was due to a masonry and sealant restoration project.

“We had noticed some of the original brick, stone and sheet metal were deteriorating and presenting an overhead hazardous condition. One of our masonry restoration contractors made all the necessary repairs expected to last for many decades,” Marsh said.

Washington Hall was built in 1881 and is named for the favorite U.S. president of the University’s founder, Rev. Edward Sorin, C.S.C.

The men’s residence hall that bears Sorin’s name is offline this academic year as a major renovation takes place. Among the improvements to the building, which was completed in 1889, is an addition to the back.

“We’re using the campus’s original handmade yellow brick reclaimed from other buildings, like Corby Hall, so the 5,700-square-foot addition will match the original structure seamlessly,” Marsh said, noting the project will be completed during the summer.

“When the renovation is completed, Sorin Hall will have, for the first time, community and study spaces along with the chapel on the first floor,” he said. The addition will replace the rooms taken to create these shared spaces.