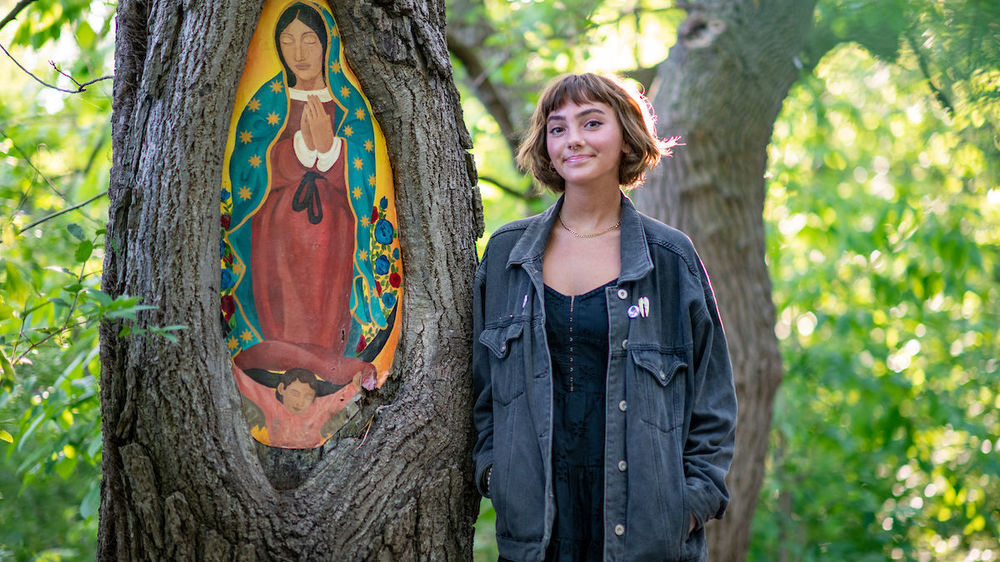 Editor’s note: Most faculty and staff are working remotely as part of the University’s response to the pandemic. We’ll be back on campus soon, but in the meantime NDWorks brings a bit of Notre Dame to you. Backstory is a series offering the stories behind some of the University’s most recognizable landmarks, new and old. Is there something you'd like to see featured? Email ideas to ndworks@nd.edu.

Walk east on the south side of Saint Joseph’s Lake and you come face to face with a modern treasure based on a centuries-old icon — the image of Our Lady of Guadalupe — framed within the large knot of a tree. This pristine image painted on canvas, using primary colors in acrylic and sealed in varnish is signed only with the initials B.B.

This piece, which appeared seemingly overnight during the summer of 2017, is the work of South Bend artist Beatrice Bradley, a 20-year-old junior at the University of North Carolina, Asheville, who is majoring in studio art with a concentration in painting.

Bradley’s familial ties to Notre Dame led to the painting on the tree. Her father Ed Bradley is a 1988 Notre Dame graduate and her mother Heidi Bradley is a 1990 alumna of Saint Mary’s College. Bradley frequents the Notre Dame campus for walks around the lakes, and it was on one of those walks with a friend that she noticed a particular tree.

“I saw this shape in the tree — the natural knot that had formed — and I thought, it looks like it’s calling for something — something with color,” recalls Bradley. “I had been interested in installation art, which is where you put art in nature or in cities. It’s integrated into people’s lives in a very tangible way. So, when I saw the knot, I thought it’s in the shape of (the) Our Lady of Guadalupe image. For some reason, that just came to mind.”

A graduate of St. Joseph High School in South Bend, Bradley first became familiar with Our Lady of Guadalupe during childhood. “It’s my favorite image of Our Lady because it’s very colorful and relaxed. It has an abstract feel to it, which is not always how she is depicted,” says Bradley of the original painting.

When Bradley returned home from her walk, she began her work on a large framed canvas, basing it on the miraculous image which hangs above the altar in the Basilica of Our Lady of Guadalupe in Mexico City.

According to the account of a man named Juan Diego, in 1531 Our Lady appeared to him on Tepeyac Hill in Mexico City instructing him to build her a shrine there. Diego took the request to the archbishop who dismissed him, asking for proof of the story. Our Lady appeared to Diego again on the hill and told him to pick roses growing nearby to present to the archbishop. It was winter and flowers would not normally be growing. Diego found an abundance of roses there and the Virgin bundled the flowers into his tilma. When Diego presented the tilma full of roses to the archbishop, the flowers fell out and the tilma was miraculously imprinted with a colorful image of the Virgin herself. The archbishop was amazed and a basilica was built on the hill.

Bradley’s painting process took four days, which in her opinion went fast. “Sometimes, if I’m not interested, it will take a long time. But that was not the case with this.”

After she finished her painting, she visited the tree again, this time to trace the shape of the knot. With that outline, Bradley was able to cut out the painting from the canvas so that it would fit in the knot perfectly. On the return trip to the tree to mount it, Bradley was accompanied by her father. With his assistance, the two stapled the painting to the tree, and then varnished it to protect it from the elements. Three years later, the canvas, the colors and the shine have held up to the weather.

Her parents have been supportive, and particularly proud of the painting and the placement on the tree. Of her father, Bradley says, “Whenever he goes for a run around the lake, he’ll send me a selfie [with the painting’].

The painting reflects much of what was important to Bradley in 2017 when she painted it. “I just felt very compelled to make something that was hopeful and was also important to the Latinx community.”

Through her college coursework, Bradley has dabbled in other mediums, including drawing still life in graphite and charcoal and working in different sculpture techniques. She’s moved from working in acrylics to painting with oil paints, painting a piece similar in style and color palette to Our Lady of Guadalupe — a portrait of Rep.  Alexandria Ocasio-Cortez.

“I did it in the same style. I think that she [Cortez] is a very inspirational and prominent figure in America, and I wanted to highlight that, especially for Hispanic communities.”

Other than being shared online, Bradley’s latest portrait is housed in her basement. As for Our Lady of Guadalupe on the tree, she continues to welcome all who go for a walk or a run around Saint Joseph Lake.

“I want to encourage visitors to see past the religious and artistic aspects of the piece and use it as a visual starting place to explore how important Our Lady of Guadalupe has been in the struggles for liberation and justice.”