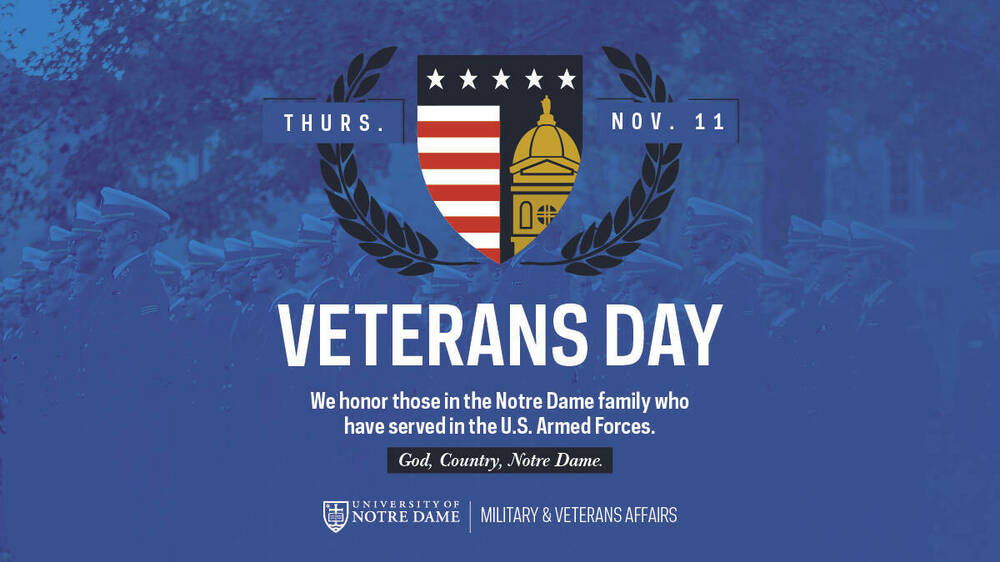 This Thursday, Nov. 11, is Veterans Day. The University of Notre Dame has a proud history with the U.S. Armed Forces, which includes the service of thousands of alumni, students and priests from Notre Dame’s founding religious community, the Congregation of Holy Cross.

Notre Dame’s legacy with the military began in 1859 with the organization of the Continental Cadets. Rev. William Corby, C.S.C., who would later become the president of Notre Dame, served as chaplain to the Union Army’s Irish Brigade during the Civil War and famously gave absolution to the troops at Gettysburg as they prepared for battle.

During World War II, more than two-thirds of the Notre Dame student body enlisted, and a Navy program, which was hosted on campus, trained 12,000 officers. After the war, a housing complex known as Vetville was built near where the Hesburgh Library now stands to accommodate veterans returning to school with their families. There is a monument north of the library to mark where Vetville stood.

In the 1950s, Notre Dame was among the first universities to host all three ROTC branches of the military. The University continues to serve as a training ground for the next generation of military leaders. After the academies, the University’s ROTC program is among the nation’s institutions graduating the greatest number of commissioned officers.

Overall, more than 15,000 Notre Dame alumni have joined the ranks of our nation’s military over the past eight decades.

In 2017, the University deepened its commitment to Notre Dame-enrolled military-connected students and their families by establishing the Office of Military and Veterans Affairs (OMVA).

The OMVA ensures that the Notre Dame experience is robust, inclusive and vibrant for military-connected students, and is a national model for how institutions can engage with and support military-affiliated students.

Additionally, the office serves as steward of the Notre Dame Veterans Fund, which helps offset tuition and living costs for military-affiliated students, providing resources to continue their education here at Notre Dame to serve God and country.

To learn more about Notre Dame’s resources for military-connected students, visit the OMVA website at omva.nd.edu.

A comprehensive article on Notre Dame’s many connections to the military was published in 2016. It can be found here.