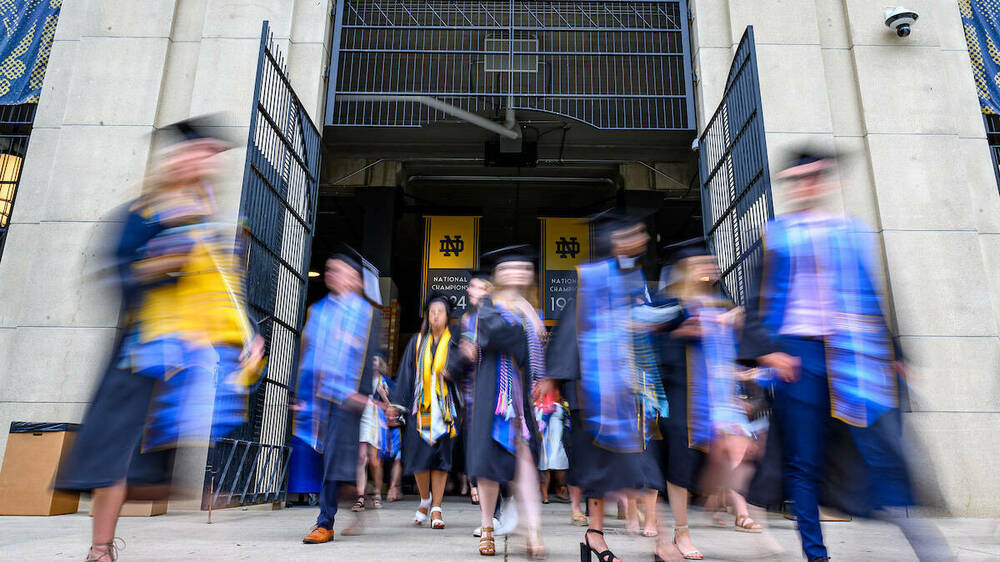 The University of Notre Dame will confer 3,344 degrees Saturday and Sunday (May 14 and 15) during Commencement weekend activities, including the 177th University Commencement Ceremony in Notre Dame Stadium on Sunday, during which 2,066 degrees will be conferred on undergraduate students.

Metropolitan-Archbishop Borys Gudziak, the highest-ranking Ukrainian Catholic prelate in the United States and organizer and president of Ukrainian Catholic University, will be the principal speaker and recipient of an honorary degree. Environmental activist Sharon Lavigne, founder and director of Rise St. James — a faith-based grassroots organization fighting for environmental justice in St. James Parish, Louisiana — will receive the 2022 Laetare (lay-TAH-ray) Medal, the oldest and most prestigious honor given to American Catholics.

Devin Diggs, a neuroscience and behavior major from Olathe, Kansas, will deliver the valedictory address, and salutatorian Morgan La Sala, a mechanical engineering major from Wayne, New Jersey, will offer the invocation.

Weather permitting, graduates will process into the stadium at 9 a.m. with the University Commencement Ceremony beginning at 9:30 a.m. All attendees must have a ticket for admission.

On Saturday, 468 students will receive master’s and doctoral degrees at the Graduate School Commencement ceremony, along with 566 master’s degree students at the Mendoza College of Business ceremony and 227 at the Law School ceremony. The Commencement Mass will also be held at 5 p.m. Saturday in Purcell Pavilion.

The Commencement Mass, University Commencement Ceremony and all diploma/hooding ceremonies will be livestreamed. A complete schedule of events is available on the Commencement website, and senior stories and other features are here.

Many common items will not be allowed in the stadium during Commencement. Visit the Commencement website for a complete list of prohibited items. In the event of severe weather, ceremonies will be moved indoors to either the Joyce Center or the Compton Family Ice Arena. Should weather conditions necessitate a move indoors, the University will communicate changes online and via ND Alert messages, social media and local news outlets.