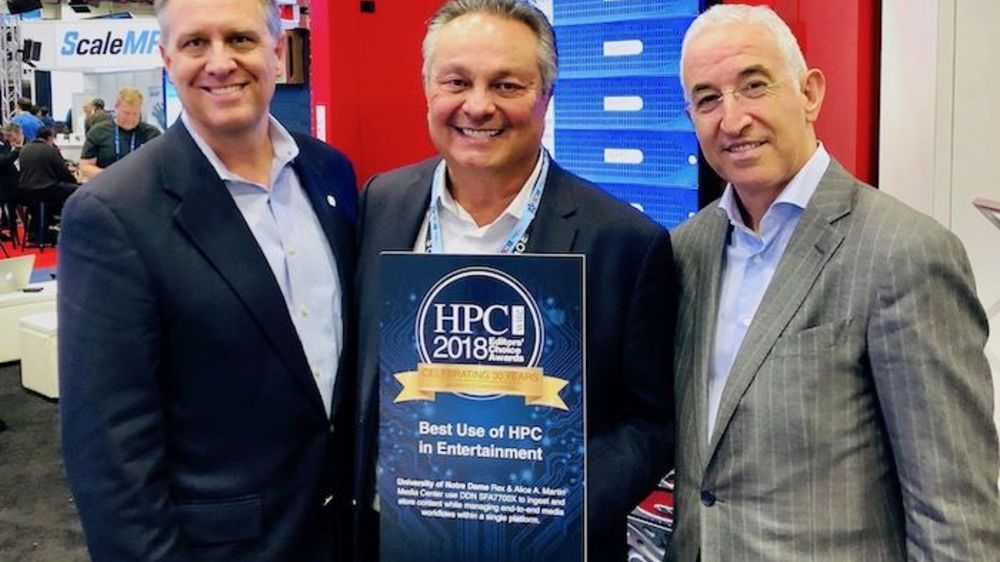 HPCwire, a leading publication for news and information for the high performance computing industry, announced its winners of the 2018 HPCwire Readers’ and Editors’ Choice Awards in November 2018.

The ND Studios Martin Media Center received the Editors’ Choice award in the Best Use of HPC in the Entertainment category.

Every year, HPCwire conducts our annual Readers’ Choice Awards to recognize the best and the brightest developments that happened in HPC over the last 12 months. These awards are widely recognized as being among the most prestigious recognition given by the HPC community to its own each year.

The nomination for the ND Studios Martin Media Center included these highlights:

The University of Notre Dame’s Rex and Alice A. Martin Media Center is embracing centralized production for campus-wide media distribution using a highly scalable storage infrastructure to bring the vast amount of content into a centralized storage facility, to support all of the media workflows of a campus-wide facility, managing end-to-end media workflows within a single platform – across ingest, editing, transcoding, distributing, collaborating and archiving.

The University of Notre Dame’s Rex and Alice A. Martin Media Center is pushing boundaries with its innovative campus-wide media production facility with live broadcasting of its hugely successful athletics teams, its world-renowned teaching facilities and faith mission, and will be one to watch as they embrace the challenges of changing media production, distribution and consumption across a university environment.

“This is a great honor for the Rex and Alice A. Martin Media Center and Notre Dame Studios,” said Dan Skendzel, executive director, ND Studios. “It’s another data point confirming success on our vision of creating a progressive media center for all of campus. My appreciation and congratulations go to Scott Rinehart, our director of broadcast technology, who led the technology design process.”

The global HPC community reviewed and voted on all nominations, and the awards were announced and presented during the annual Supercomputing Conference held in November in Dallas, Texas. Scott Rinehart attended the conference and accepted the award.

Originally published by Hong Yu at studios.nd.edu on December 01, 2018.