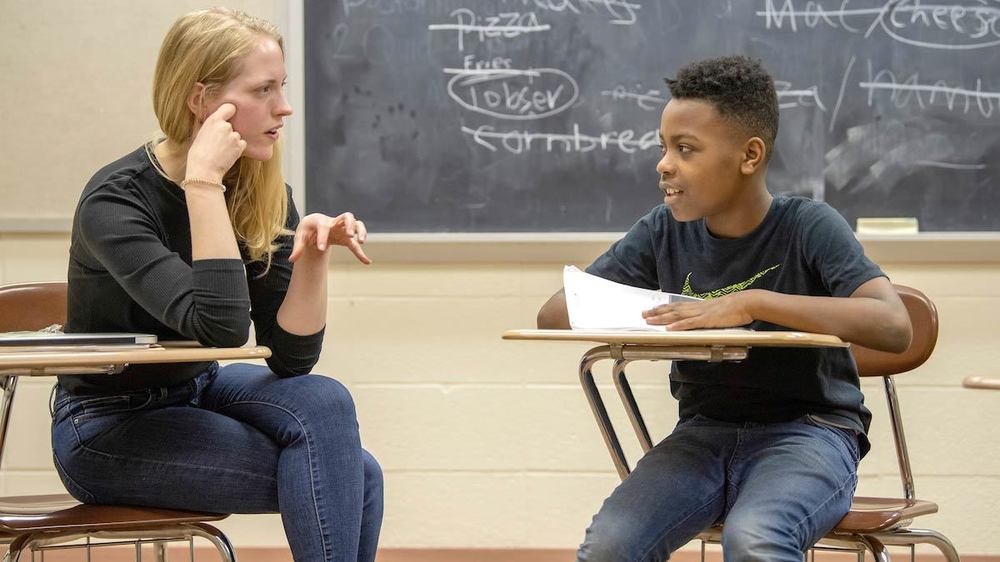 Led by students from the University of Notre Dame, a group of 45 fifth-graders from Clay International Academy in South Bend gathered in adjacent classrooms recently to learn Latin as part of a pilot Aequora program sponsored by the Department of Classics at Notre Dame.

In one classroom, teachers and students listed their favorite foods on the board — mashed potatoes, pierogies, “mac/cheese/tacos,” sardines, pancakes — and then discussed which ones would have been available in ancient Rome.

In another, students discussed subject-verb agreement and practiced vocabulary — illud (it), illa (she), ille (he), ego (not the waffle).

In yet another, teachers quizzed students on the Roman gods, including the god of the dead.

“Hades is Greek; we are Roman,” said Emma Ferdinandi, a sophomore liberal studies and classics double major from California.

“Well,” the student said, “we’re going to have to go to war with the Greeks, then, and take their things.”

Created by the nonprofit Paideia Institute, Aequora is an introductory Latin program that introduces K-8 students to the basics of Latin vocabulary and grammar, Roman culture and mythology and the connections between Latin, English and Spanish with specially designed lessons and activities.

The program, which engages talented high school- and college-age Latinists as tutors, includes logistical and curricular support, including a textbook, teacher’s manual and game appendix for a one-time fee of $1,000.Notre Dame students work with Clay students during their Latin class.

The curricular support makes it easy for volunteers to teach the materials, regardless of preparation or experience level.

“It’s nice, because it’s very slick and playful for the kids, but it also requires very little preparation from the (Notre Dame) students,” said Luca Grillo, associate professor of classics at Notre Dame.

There currently are more than 30 Aequora sites around the U.S., in places as diverse as Cedar City, Utah; Lexington, Kentucky; and East Harlem, New York. 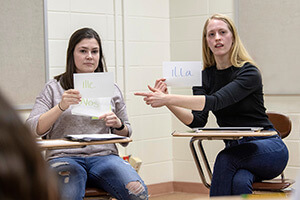 At Clay, the program also supports the school’s emphasis on foreign languages as an aspiring International Baccalaureate (IB) school. IB schools aim to develop curious and compassionate young people and improve the world through intercultural understanding and respect.Philosophically, the program is shaped by a belief that everyone should have access to Latin, and by a vision of classics as an inclusive, diverse and socially engaged subject. Classics is the study of ancient Greece and Rome, including the language, literature, history, culture and archaeology of those civilizations.

“We’re in the candidate phase of becoming an International Baccalaureate school, so we’re exploring ways that we can be more internationally minded,” said Tracy Slattery, IB Programmes coordinator for Clay. She added, “This seemed like a good way for us to support our students in that endeavor and bring our teachers along as well.”

According to Grillo, Latin promotes English and Spanish literacy because of its foundational influence on language, improves reading, writing and spelling, and promotes logical thinking, an essential process for math, science and engineering.

“There’s a lot of research proving that students who take Latin do better with standardized tests,” said Grillo. “For reading, vocabulary, retention of memory and so on, Latin is very helpful.”

And while Latin is “dead” in the sense that it no longer is used in everyday conversation, its influence on modern language — in particular, English and Spanish — is both profound and vast.

“People know that Latin is a dead language. But what people very often do not know is that more than 50 percent of the vocabulary in English comes from Latin, and of course for Spanish, the percentage is even higher,” Grillo said.

At the same time, “So much of our culture is founded off (Roman) culture,” Ferdinandi said, from art, architecture and technology to literature, language and law.

“I’m interested in teaching Latin, so this is a good opportunity to practice that,” said Juliana Vossenberg, a graduate student in theology at Notre Dame and one of the tutors.For the Notre Dame students, the program provides an opportunity for both service learning and community engagement. Clay serves a diverse population of students that is about 45 percent black and 13 percent Hispanic. Seven in 10 of the school’s students receive free or reduced lunch.Following the short but successful recruitment of 21 student tutors, the program kicked off in January. Classes meet from 2 to 3 p.m. every Friday. The Notre Dame students — mostly classics majors — travel to and from Clay by caravan. Each student is assigned four or five Clay students. A licensed teacher is in each classroom for support. Grillo, who arrived at Notre Dame from the University of North Carolina last fall, launched the program here in collaboration with Tadeusz Mazurek, associate teaching professor of classics at Notre Dame, and Angela Ruiz, principal at Clay, and with support from a $2,500 Community Impact Grant from the Center for Social Concerns. 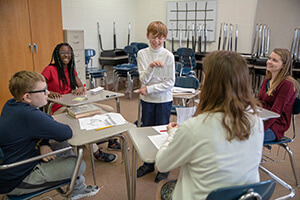 Like classmates Korbin Hughes, 11, and Samuel Pryor, 11, Tlatenchi expressed a particular fondness for the gods. “They have some good traits,” she said.“I like how we can communicate but still have fun,” Vanessa Tlatenchi, 11, said.

Grillo said he hopes to continue the program next year, whether in “the same form, with volunteers,” or “as a sort of class in Latin pedagogy.” He’s even been approached about expanding it to other schools, he said. “The word is out.”

“The partnership has been working very, very nicely,” Grillo said. “I think (Clay is) very pleased with us, and I think our students are enjoying what they’re doing.”

“It’s been a delight,” she said. “Sometimes partnerships can be tricky. But Luca and his team have been amazing to work with.”

Originally published by Erin Blasko at publicaffairs.nd.edu on April 30, 2019.