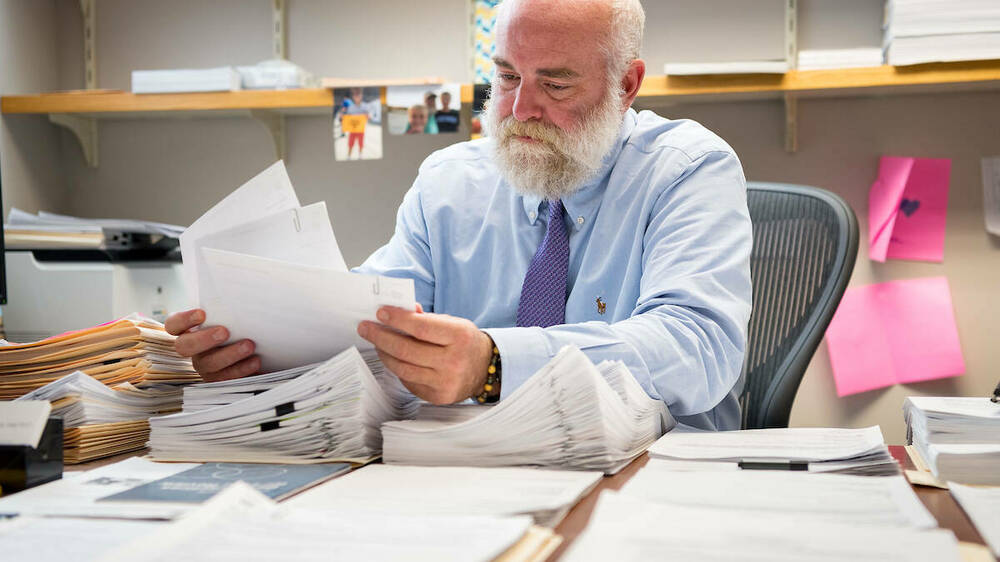 When one hears the name Notre Dame Press, one might imagine a very large, physical printing press on the University’s campus. This is not the case. But you can find the brains of the operation, supported by a staff of 12, unassumingly located on the third floor of Flanner Hall.

Notre Dame Press has been active since 1949, publishing three books in its first year, one of which was “God and the World of Man,” written by the University’s new president, Rev. Theodore M. Hesburgh, C.S.C. From that humble beginning emerged a widely respected publishing house that has garnered award winners among its books that have a global audience.

Today, Notre Dame Press, the largest Catholic university press in the world, is one of approximately 150 university presses publishing scholarly work, largely in the humanities and social sciences, according to Stephen Wrinn, the press’s director. “The manuscripts we publish are highly selective and peer-reviewed, and serve a critical role within the academic ecosystem,” Wrinn said.

Contrary to what many may believe, Notre Dame Press, or ND Press, is not a vehicle for publishing the work of Notre Dame professors alone. It’s best to be published by a press outside of one’s home university, Wrinn explained. “In order to get tenure in their positions, professors need external recognition from an outside press. It seems counterintuitive, but if you’re up for tenure at Notre Dame, you’re most likely going to publish somewhere else. And, for example, if you’re up for tenure at Harvard, you’ll want to publish at Notre Dame. It’s a process of peer review that every university press contributes to.” Authors seeking to publish their work should also consider presses that publish in their discipline.

“If you are writing on theology, medieval studies or American political thought, Notre Dame is widely considered to be one of the best university presses in the world,” Wrinn said.

How to get published

With hundreds of submissions each year, ND Press publishes roughly 55-60 books annually. Although it's not feasible for all projects, Wrinn said if ND Press rejects a Notre Dame author's manuscript, as a service to the campus community, the editorial staff takes the time to explain the reason behind the decision. “In many cases this involves educating authors who often don’t know the role of the press,” he said. “We counsel them to publish elsewhere because it’s in their best professional interest.”

To give Notre Dame faculty members the best opportunity to get published, the ND Press team often holds workshops for graduate students and junior faculty on how the publishing industry works and how to go about getting a book published. This outreach serves the press’s mission to advance the knowledge of campus colleagues, even though most of the press’s authors are not Notre Dame faculty.

The type of book — and how it is marketed — plays a role in acquisition and sales. According to Kathryn Pitts, marketing and publicity director, monographs are books written by scholars for other scholars. A trade or crossover book is intended to be read by people outside of academia. Trade books are generally written in a more accessible style and have a focus that appeals broadly to most readers. This type of book often places more emphasis on general-interest topics and individual narratives rather than on examinations of specialized topics, as a scholarly mono- graph might. (For an example of a crossover book, see “The Good Life Method,” page 6.)

“An author’s willingness and ability to promote their work on social media and elsewhere — making sure that the book is discovered and its author’s voice amplified to a targeted audience — is very import- ant. That’s something we focus on: namely, educating our authors to get them involved in marketing and promoting their books. We are seeing a marked increase in media attention and sales for the books with authors who participate in book events, social media, blogging or some other form of promotion,” Pitts said.

University presses have to negotiate a fine line. “We have a hybrid goal of seeking only the highest quality scholarship, but doing it in a financially sound and sustainable way,” Wrinn said.

ND Press creates and generates revenue, but it also receives support from the University. “But that’s not a sign of hard times,” he said. Certain books that will have a high impact in a given field may have relatively fewer sales given the size of that field, which is part of the nature of scholarship. The University’s support enables the press to publish such books and in this way continue to serve this audience and others in its capacity as a nonprofit organization.

Bringing books into the world

Getting books into the hands of interested readers is one of the goals of ND Press. The pandemic didn’t slow down that mission. The press enjoyed a 20 percent increase in unit sales over the previous year, selling nearly 60,000 print books in the U.S. and more than 6,000 books internationally.E-book sales also went up, including backlist books that may have started as physical books published decades ago. Many of those books have been digitized in an effort to get the press’s entire list available to as wide of a global audience as possible. The Hesburgh Library and Curate ND, the library’s digitizing resource, make hundreds of books (and other media) available through their repository, with free and open access offered globally to the Notre Dame community.

The actual printing of the books happens throughout the United States, according to Wrinn. Longleaf Services Inc., affiliated with the University of North Carolina Press, works with a consortium of 18 university presses to print and ware- house ND Press titles and distribute them throughout the country and the world. “In the ’90s, a number of presses had their own distribution warehouses and facilities,” Wrinn said. “But it is no longer cost effective to operate your own warehouse.”

Wrinn suggests that out of four possible sizes of university presses (small, medium, large and extra- large), ND Press would fall somewhere between medium and large, with an ongoing effort to expand. “There are some presses that do five or 10 titles a year. There are some presses that do 2,000 titles. We are safely in the middle, with ambitions to grow over time,” Wrinn said.

Wrinn’s ambitions are well-grounded given the caliber of accomplished scholars and authors the press has published in the past and continues to publish today. Its future authors will continue to confirm Wrinn’s energetic goals.

“The future looks bright,” Wrinn said, “given our stellar backlist and forward-thinking editorial program that seeks to publish the best books in fields that complement our University’s mission. Our team is working tirelessly to elevate ND Press’s reputation and financial sustainability. We are poised for great things.”