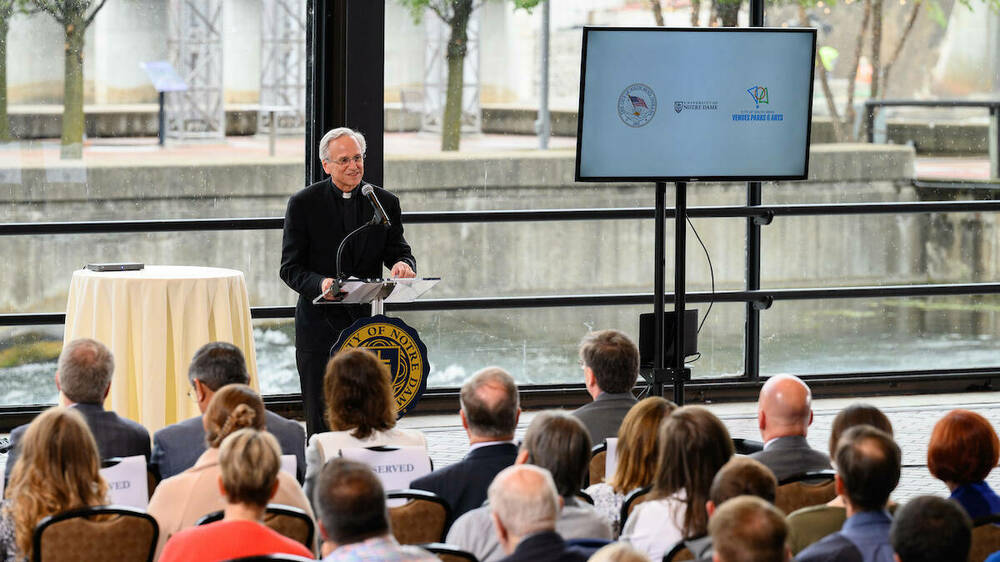 The University of Notre Dame dedicated a new hydroelectric facility, ND Hydro, along the St. Joseph River during a ceremony Monday (Sept. 12) in downtown South Bend.

Situated along the riverbed beneath Seitz Park, the 2.5-megawatt facility started generating power for the University in May and has operated at about 70 percent capacity ever since based on spring and summer river levels.

As a source of clean, renewable energy, the state-of-the-art facility will generate an estimated 7 percent of the electricity for campus and offset 9,700 tons of carbon dioxide annually, benefiting both the University and surrounding community.

“Developed in close collaboration with the city of South Bend and other community partners, this facility, powered by the St. Joseph River, is yet another example of Notre Dame’s ongoing commitment to sustainability — specifically, the cultivation of new and innovative sources of clean, renewable energy,” Notre Dame President Rev. John I. Jenkins, C.S.C., said. “As the latest in a growing portfolio of green energy projects for Notre Dame, it will help us to achieve the ultimate goal of a carbon neutral campus by 2050.”

The facility is the first in North America to take advantage of new low-cost, modular turbine technology from Voith, a global provider of hydro solutions based in Germany. Along with the new St. Joseph Solar Farm, a joint investment with Indiana Michigan Power, and other clean energy projects, it will further reduce the use of natural gas as a source of energy for campus.

“Building on previous clean energy projects, this new facility further diversifies Notre Dame’s energy supply, reducing the University’s dependence on fossil fuels and contributing to a more reliable and resilient, not to mention green, power grid overall,” said Paul Kempf, assistant vice president for utilities and maintenance at Notre Dame. “As a strategic investment in the future, its value will only increase over time.”

Work on the project began in 2019 but was slowed by the pandemic and other planning and logistical hurdles. Construction involved more than 6,700 cubic yards of poured and precast concrete, plus 1.1 million pounds of steel.

The facility relies on the existing concrete and timber crib dam between Seitz and Island parks to create the necessary headwater levels to turn a series of 10 turbines. The resulting electrical output is then transmitted north to campus via an underground transmission line.

The project dates to 2016, when Notre Dame entered into an agreement with the city to develop a hydro facility along the river using an existing exemption from the Federal Energy Regulatory Commission. Under the terms of the agreement, the city agreed to lease the underground portion of the park to the University. The term of the lease is 50 years. The University, in turn, agreed to contribute $1 million toward the restoration of Seitz Park, which was already scheduled for renovations as part of a comprehensive master plan for the entire parks system. Additionally, the University helped to restore a failing section of sea wall and create what will become a river overlook at the park.

Work on the park, which offers a view of the dam and is a key component of the South Bend river walk, is already underway. Plans call for an additional entrance, a new performance area, improvements to the East Race bridge and promenade and a new public building with bathrooms and space for ticket and other sales related to the East Race and other activities and events. It is expected to reopen next summer.

“It’s a challenging project. It’s a complex site with a complex set of considerations,” said Aaron Perri, executive director of Venues Parks and Arts for the city of South Bend. “But anytime we get to partner with the University of Notre Dame on a project, we know it’s going to be done right; Notre Dame doesn’t cut corners. So in that respect, it’s been a wonderful partnership, one that serves to benefit both the city and Notre Dame for generations to come.”

The hydro facility is one aspect of Notre Dame’s overall sustainability strategy, which, consistent with its Catholic mission and values and the Pope’s encyclical on climate change, seeks to reduce campus carbon emissions to net zero by 2050.

In the past several years alone, the University has commissioned two geothermal plants, invested in the aforementioned solar farm, partnered with Grind2Energy and Homestead Dairy to convert non-consumable food waste to energy, and ceased burning coal in favor of natural gas. It also is committed to LEED certification of all new buildings, and to energy-efficient upgrades to existing buildings and equipment.

In recognition of these and other investments, the University recently joined the EPA’s Green Power Partnership program, which recognizes organizations whose actions help to advance the use and development of new and existing sources of green energy. This includes a variety of leading Fortune 500 companies, as well as small- and medium-sized businesses; local, state and federal governments; and colleges and universities.

For more on this and other sustainability efforts, visit green.nd.edu.

Originally published by Erin Blasko at news.nd.edu on September 12, 2022.