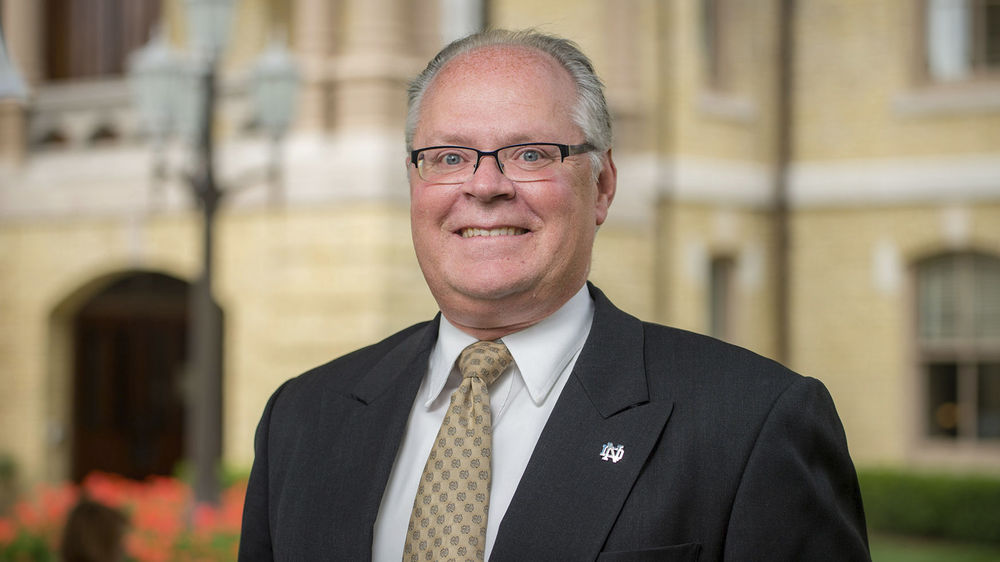 Though new to his position as the vice president for finance, Trent Grocock is no new face to the University. Following his graduation from Notre Dame in 1989, he spent five years working in Chicago and another couple of years in his hometown of Fort Wayne, until ultimately making his return to South Bend when he accepted a position as a senior analyst at the University.

“It’s always felt like home,” says Grocrock, expressing that he made the move back to South Bend in 2001 and hasn’t looked back since. After spending 18 years at Notre Dame in various finance positions, he’s settling into his new role.

Grocock’s responsibilities include directing the offices of the controller, treasury services, budget, procurement services, and financial planning and analysis, as well as the Northeast Neighborhood Redevelopment. His previous position as associate vice president for financial planning and analysis prepared him well for his current role in which he will oversee budgets, capital planning, treasury management, procurement, real estate acquisitions and development, financial reporting and analysis, accounting and financial services, the tax department, research and sponsored programs accounting, payroll and accounts payable.

While the expansive list of responsibilities could be intimidating to some, Grocock sees the position’s many facets as opportunities for growth.

“Even though I’ve been here for 18 years, there’s still a lot for me to learn.” He feels fortunate that he doesn’t have to do it alone.

“I’m excited about this new position because I get the opportunity to meet people I’ve never met before,” Grocock says. “It’s a great time to become a new leader because there’s a fair number of other new leaders. Some of the things that I’m experiencing, they’re experiencing for the first time as well.”

Grocock’s statements allude to an aspect of his personality that is perhaps not expected in one who spends their days dealing with numbers: He is a people person at heart.

“One thing I’ve been blessed with is the number of people that I’ve had the opportunity to work with across campus over the years,” he shares, noting how developing new relationships is something he continually looks forward to in his job. Reflecting on his prior nine-month stint on the leadership team of the Office of Information Technologies, Grocock admits that though he knew little about the technology industry, he enjoyed the opportunity because it allowed him to get to know a new group of people.

He also cites his time participating in the Executive Leadership Program as a wonderful opportunity to connect with people. During an 18-month period, the small group of 16 campus leaders met every month or so to discuss topics such as the qualities of a good leader.

“It was a psychologically safe place,” shares Grocock, expressing that the unique dynamics of the group allowed them the freedom to talk about what was working at the University and what wasn’t. “I knew some of the 15, but I didn’t know all of them. It really bonded the group together and we were able to have open and frank discussions about some tough topics.”

Grocock’s leadership style has also been influenced by a number of individuals he’s worked with at the University.

He cites campus leaders such as Scott Malpass, vice president and chief investment officer; Shannon Cullinan, executive vice president; and John Sejdinaj, former vice president for finance. Grocock has not forgotten the lessons learned and values held by those before him. He carries with him the mantra of Cullinan, his predecessor: “Always be hungry. But, just as important, be humble. And as we look toward the future, be hopeful.”

His connection with people is also evident in the way he sees the role of the finance department.

“Finance, from my perspective, is a service department,” Grocock shares. “We’re here to assist you, to help you, to find a way to yes.” He expresses how people may see the department as an obstacle to their goals, rather than a tool to be used to achieve them.

“I hope the partners that work with finance continue to view and realize that we’re a resource, we’re service-minded, and we truly are a partner to the University.”

For Grocock, it’s always been about putting the University’s mission and the people first. “Being part of the Notre Dame family is not being an alumnus, it’s not necessarily working here, and it’s not being just a sports fan. It’s really about understanding the mission, the people, the place and believing in it.”

And Trent Grocock believes in it.