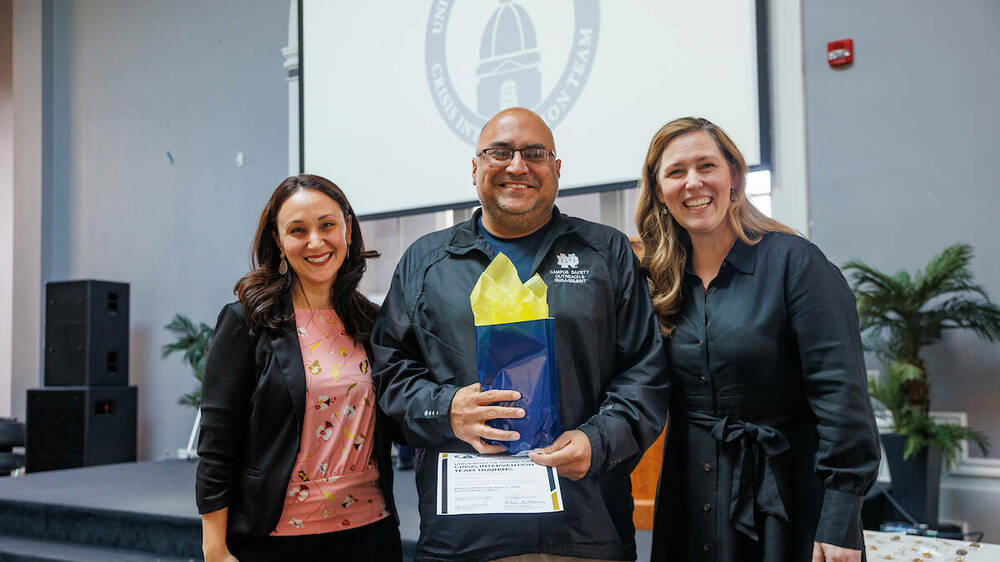 Law enforcement agencies have been in the national spotlight in recent years for alleged use of excessive force. Some of those cases have involved people experiencing mental health crises. According to a Washington Post database, since 2015, nearly a quarter of people who died during encounters with police suffered from a mental illness.

The lack of mental health crisis services across the U.S. has resulted in police serving as first responders to most crises. Crisis Intervention Team (CIT) training programs are intended to improve the outcomes of these encounters. Recently, the Notre Dame Police Department held CIT training for its officers, to better support the campus community.

The 40-hour training, held one week during the spring semester, included 26 presenters and was facilitated by two of Notre Dame’s own, 2002 alumnae Amanda (Dovidio) Zelechoski and Michelle (Sutton) Tyler. The presentations were dynamic, including experiential simulations and exercises, site visits and panel sessions.

Why CIT at ND?

Notre Dame Police Chief Keri Kei Shibata already had her eye on CIT training, particularly for the entire department. Since 2010, 12 officers have received CIT training, in the fashion that many departments use to train officers — a few at a time and usually at an off-site location. But Shibata had something else in mind.

Mike Seamon, vice president for campus safety and University operations, recalled: “Last summer when Keri Kei and I discussed what could have a lasting and meaningful impact on NDPD, she brought forth the idea of CIT training. When we pulled on that thread a bit more, it was Keri Kei’s idea that we could possibly build a CIT module specifically designed for NDPD.”

In 2020-21, Shibata had worked with Zelechoski, a psychology professor and director of clinical training at Purdue University Northwest, to provide trauma-informed training for her officers. “I reached out to her to see if she could conduct CIT training. She shared that her roommate and close friend from ND undergrad, Michelle Tyler, also had experience working with police departments on CIT.”

At the time, the St. Joseph County Police Department was also working on a CIT program. Shibata decided to send Lt. Alex Novelli to the county’s program, which included a train-the-trainer session. “We also wanted to build our own program because of the unique systems, partnerships and resources at Notre Dame.”

In the wake of the murder of George Floyd in 2020, Notre Dame students approached Shibata about CIT training. Another student group with a focus on mental health and peer support also came to Shibata.

“With discussions about police reform and incidents involving police responding to mental health calls around the nation drawing national attention, CIT was a growing focus and best practice,” Shibata recalled.

“It was perfect timing that we had developed a relationship with Amanda, and she and Michelle were able and willing to help us build the program,” Shibata said. Zelechoski, Tyler, Shibata and others began developing their program.

In addition to her work at Purdue University Northwest, Zelechoski is a licensed clinical and forensic psychologist and attorney, specializing in trauma. She had been part of the team that created CIT training for the Philadelphia Police Department.

Tyler is a licensed clinical mental health counselor and the director of operations for Resources for Resilience, a nonprofit organization that offers resiliency-focused community education and professional development programs. She also has CIT training experience.

Zelechoski and Tyler brought their years of experience to bear as they designed a brand-new CIT training exclusively for NDPD — that is to say, training for campus police. It would need to be different from the training that local officers attended.

Zelechoski and Tyler worked as facilitators along with Shibata and Jo Cecilio, the Cavanaugh Hall rector working with the NDPD, and the CIT Planning Committee to build the program.

Zelechoski is quick to point out that CIT training for a university police department needed to be different, recognizing that universities are somewhat in a world of their own.

“We’re covering a few developmental periods and zooming in on them, much more so than, say, a city or county agency would. They may be dealing with children or intervening on behalf of children and adolescents, where we’re focused more on the emerging adult and adulthood stages,” she said.

Zelechoski explained the unique position campus police are in, encountering high incidences of the emergence of mental health symptoms because of the age of the population living on campus and attending classes. Additionally, campus police may also deal with faculty and staff as well as visitors to campus.

“We’ve worked hard to not just have the focus be on students, but really to make sure that we are covering all of the populations that the officers get called out to respond to,” Zelechoski said.

“This isn’t just a training where officers come and sit for 40 hours at a week-long training and that’s it. It is intended to be a team and a model with lots of preparatory work and with lots of follow-up. It’s a model for transforming a department to be more responsive in these mental health crisis situations.”

The NDPD CIT training was not a typical sit-and-be-lectured-to workshop. First, attendees received a pharmaceutical bag with “medication” in pill bottles. The “medication” was candy, but the instruction was for the recipient to take the medication as prescribed (and officers had different instructions). Officers were quickly thrust into the everyday world of a person with potential mental health concerns.

The exercise was designed to “build empathy and understanding among our officers around how difficult it can be to manage a complex medication regimen over time. Our goal was to help them answer the frequently asked question, ‘Why don’t individuals just take their medication?’” Tyler said.

“We know, of course, that there are a number of factors that contribute to challenges in following a regimen and/or decisions not to take certain medications as prescribed,” Tyler said. “For instance, there may be a lot to keep track of, there may be challenges in obtaining or paying for refills, they may feel shame or stigma around taking medication, they may start to feel better and decide they no longer need them, there may be uncomfortable side effects — some of which affect their ability to perform their job duties.”

Next, in a game called the Brain Architecture Game, teams were given a mix of straws, pipe cleaners, dice, connectors and weights, along with a deck of cards with various life scenarios — the cards you are dealt in life, so to speak. The decks had an even number of positive, tolerable and negative influences. Company literature describes the interactive group activity as a game that “builds understanding of the powerful role of experiences on early brain development — what promotes it, what derails it, and with what consequences for society.”

Teams were instructed to build a “brain” using the materials and influenced by the circumstances on the cards. Some teams had the capacity to build firm foundations; other teams clearly had a rocky start. As the teammates watched their pieces lean from the weight of the commands on the cards they drew, the inclination for at least one team was to cheat (they didn’t).

“I think it shows how our brains function, but it kind of shows us how different things make a stronger brain and how negative things impact our lives,” Officer Jarett Gilpin said.

The training continued throughout the week with a number of speakers, site visits and role play simulations. One exercise, Hearing Voices, included use of headphones.

“They were playing music and all of a sudden you hear voices yelling, ‘You’re doing a bad job.’ Don’t look up, don’t look down, just focus, focus. We hear these voices in our headphones. And you are trying to go through these scenarios — find people and talk to them, and then move on to the next person, all while you have these voices in your head,” Gilpin said. “It kind of gives you an idea of what people with schizophrenia go through in their day-to-day. It made you really think.”

Officers also spent time in role playing, with the help of University staff and students, acting out parts in select scenarios.

Officer Ryan Steppe appreciated the hands-on portion of the training.

“The de-escalation role-plays really helped me, going through them and getting thrown certain curve balls, because every situation is different,” Steppe said. “It helps me develop those skills rather than sitting here and listening to a lecture.”

Each day officers also participated in self-care segments, with exercises directed at preventing burnout and helping to avoid the long-term damage of chronic stress. “We know that responding to others who are in distress can take a toll on the mental and physical health of helping professionals and wanted to dedicate a portion of our CIT training to equipping our officers with some practical, easy-to-use tools that they can use to keep themselves healthy and resilient,” Tyler explained.

"The tools that we introduced come from an evidence-informed public health curriculum called, 'Reconnect for Resilience.' They are designed to help first responders, educators, healthcare workers, caregivers, and other helping professionals better understand and manage their own and others' stress responses," she said.

Shibata said the training was well-received by her officers, giving them a much deeper understanding of options, resources and partners. For some it renewed their interest in certain topics and issues that they want to be involved in, such as domestic violence response.

“They had the opportunity to practice responding to challenging crisis calls in a safe environment and to talk through and debrief how they handled it, and their options and resources, with mental health professionals,” she said. “I was very proud of their engagement and interest throughout the week and also grateful for the support of the officers who worked long hours to cover campus operations while the majority of officers were in the training.”

NDPD also had a number of dispatchers and other staff attend some or all of the training, which Shibata said will also strengthen police response. “We’ll have people answering the phone for the crisis call who will be able to ask better questions and have a better understanding of how officers will respond,” she said.

When it was all said and done, the last thing to do was to present certificates of completion. Speakers included Marianne Halbert, the criminal justice director for National Alliance for Mental Illness Indiana, NAMI Indiana, and Seamon.

“I give Keri Kei Shibata and her entire leadership team credit for being ambitious and bold in identifying CIT as a training platform that would be transformational, not only for NDPD, but for the entire University community,” Seamon said. “Their commitment of time, energy and resources was a clear indication that they knew that this training would be incredibly impactful on how they serve Notre Dame. The fact that they created a week-long, 40-hour intensive course for their department is a testament of how the NDPD team feels and cares about the campus community it serves.