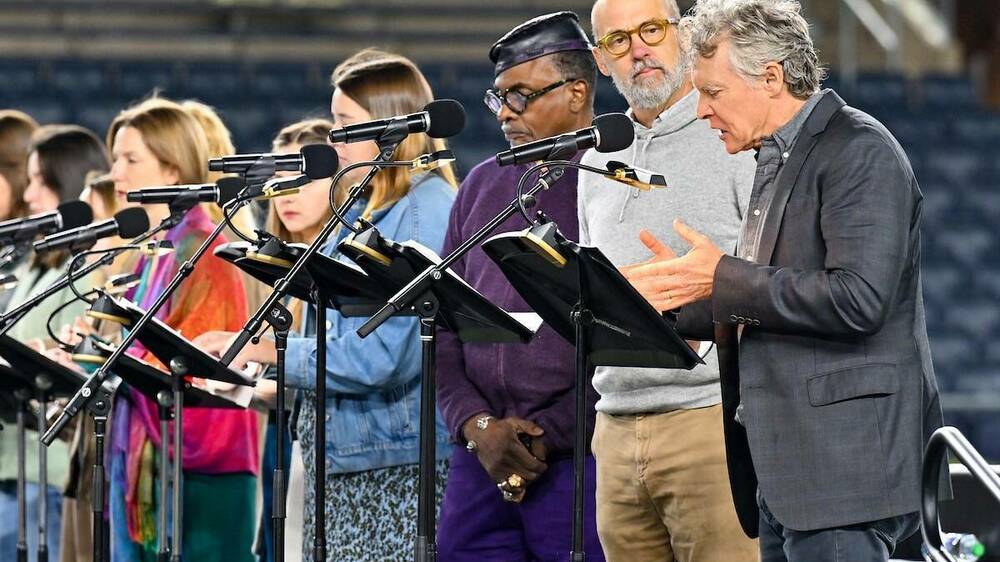 As part of this year’s Notre Dame Forum, the University, in partnership with Theater of War Productions, hosted a dramatic reading of an ancient Greek tragedy, Aeschylus’ “The Suppliants,” by Emmy Award-winning actors Anthony Edwards and Keith David along with actor and director Tate Donovan in Notre Dame Stadium on Monday, Oct. 3. More than 700 students, faculty, staff and community members attended, joining in the conversation about the costs of war and the experiences of those affected by violence across the globe.

Joining Edwards, David and Donovan as members of the chorus were students from Ukrainian Catholic University who, in the midst of the war in their country, are studying this fall at Notre Dame.

Following the reading, a panel of Notre Dame community members who experienced violence and war in their home countries shared their stories and offered their reactions. This began a town-hall-style global discussion that included commentary from audience members in Notre Dame Stadium and around the world, including from Ukraine, via Zoom.

Using a 2,500-year-old text as the catalyst for powerful, global dialogue, Theater of War’s “The Suppliants Project: Ukraine” seeks to amplify and humanize the voices and perspectives of people whose lives have been touched by war in Ukraine and other countries.

The Notre Dame Forum, hosted by University President Rev. John I. Jenkins, C.S.C., has been held annually since 2005, with events each year focused on a central theme of particular importance to the University, the nation and the larger world. The theme for the 2022-23 academic year is “War and Peace."