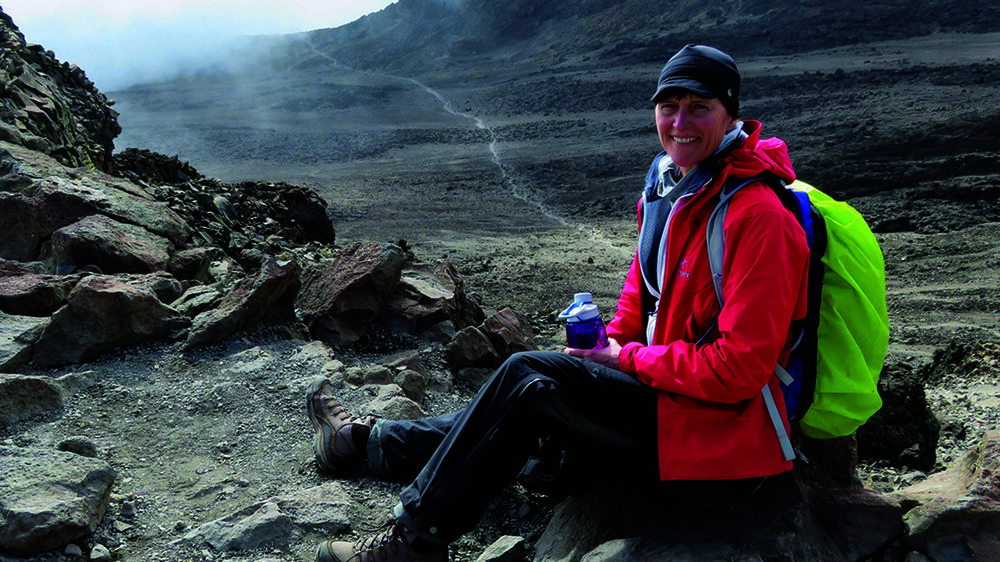 On the third evening of her five-day ascent of Mount Kilimanjaro, Nancy Majerek wasn’t sure she was going to reach the top.

“I had a bad case of altitude sickness,” says the University of Notre Dame treasury manager and South Bend native. “I couldn’t even stand to smell the food being prepared for the other hikers.”

It had been a frustrating day from the start. She and her group had descended on the trail as much as they had climbed during their eight hours of hard hiking. They could see the peak of Kilimanjaro — the tallest mountain in Africa at 19,341 feet — but it seemed to being getting farther away.

And then the altitude sickness set in. “One of the guides brought me over some raw ginger to take,” Majerek says. “After 20 minutes, it was as if I had been hit with a magic wand. I was so much better.”

Two days later, she and her trail mates started out at 1 a.m., climbing through the early-morning stars and later marveling at the sunrise before reaching the summit at 9:30 a.m. “It was pretty emotional but we were only there for 10 minutes before we had to start down,” she adds. “The temperature was below zero.”

She did take time to enjoy the view, celebrate the accomplishment and leave a few stones at the top of Kilimanjaro that she had picked up from campus after her 14-day trek of the Notre Dame Trail in 2017.

A triathlete and former gymnast who also teaches paddle-boarding, Majerek says that climbing Kilimanjaro was one of the toughest challenges she has ever faced. “I don’t think any of us were totally prepared for it,” she says. “We weren’t an experienced hiking group, and that last day was almost like a death march.”

They hiked the Machame Trail. They covered about 37 miles, starting at an altitude of 5,700 feet and climbing to over 19,300. “We went through all kinds of terrain — rainforests, deserts and what seemed like the surface of Mars,” Majerek says. “It was all incredibly beautiful.”

Her group consisted of 18 people, all with Notre Dame connections, including former Irish swimmer Haley Scott DeMaria, who continues to amaze after suffering life-threatening injuries during the 1992 team bus crash. Many of the participants had met on the Notre Dame Trail in 2017 while retracing Father Sorin’s journey from Vincennes, Indiana, to South Bend. Ten of the 18 made it to the top.

They were accompanied by Tanzanian guides and porters. “They set up our camp, made our meals, and the porters would carry 90 pounds of packs and fly past us on the trail,” Majerek says. “They were inspiring and amazing.”

The trip was amazing, too, and ended with a safari in the Ngorongoro Crater and Serengeti National Park in Tanzania.

Majerek returned to South Bend on Sunday, Jan. 20, and was back to work the next day. Early that week, she admitted she was glad she made the climb but said she had little interest in doing it again. A few days later, she was changing her mind. “I would go back, but I think I would prefer a seven-day climb rather than the five.”

What would she have done differently? “Brought some music or podcasts or mantras,” she says. “We weren’t encouraged to talk very much to conserve our energy. So it would have been nice to have something to focus on besides just the trail in front of you. There was a lot of praying on that last day.”

A banker for 13 years before returning to her Notre Dame alma mater in finance, Majerek has always enjoyed a good physical challenge. After tearing her ACLs in both knees during a skiing accident several years ago, the doctor eventually gave her the OK to return to running.

“But I hadn’t been running,” she says. “I guess I just looked like a runner.”

So why not be one? Majerek embraced running — along with swimming, biking, paddle-boarding and kayaking. She even did a couple of half Ironman triathlons.

Then just before she turned 50 a few years ago, she came up with a list of challenges she wanted to do to push her boundaries. Many were athletic challenges. Others were of a different nature — like learning how to throw a pizza, performing in a South Bend Civic Theatre play and riding in a hot air balloon.

Then there was her streaking challenge at 3 in the morning in a gated Florida community. “Fastest mile of my life,” she admits.

Unlike the miles up Mount Kilimanjaro. Those were slow and often painful going. “But incredibly satisfying and worth the effort.”

And thank goodness for the
Notre Dame camaraderie — and a little raw ginger.

This story was previously published in the South Bend Tribune.