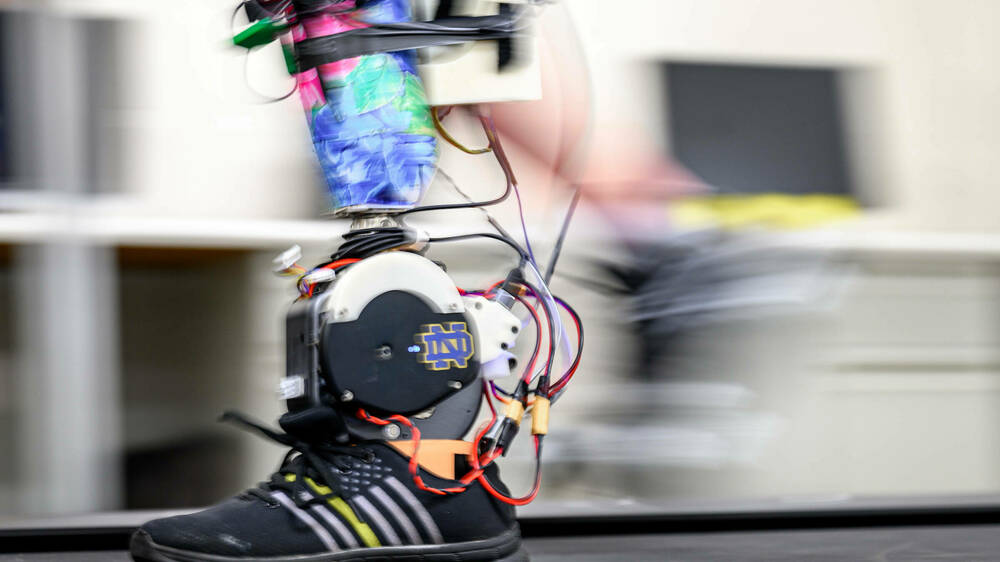 Grasping the railing of a stopped treadmill in the basement of Fitzpatrick Hall of Engineering, Laura Light broke into an electric smile as she used an experimental foot-and-ankle prosthesis to stand on her tiptoes.

Patrick Wensing, an assistant professor of aerospace and mechanical engineering who specializes in robots and motorized prosthetics, gave a thumbs-up to his two doctoral degree students. David Kelly focused on Light’s balance and safety, while Ryan Posh watched the data his computer received from several electric sensors attached to the muscles of Light’s residual left calf.

The sensors read electrical twitch signals from Light’s muscles, allowing her to fully control for the first time the forward roll of a motorized ankle device — and to ultimately stand on her toes.

“I feel like a little kid,” said Light, 28. “That was amazing, because I have not been able to do that ever — since my foot was amputated as a little child. That was a really cool experience, something I always wanted to do as a kid.”

Originally published by Brendan O'Shaughnessy at news.nd.edu on July 01, 2022.