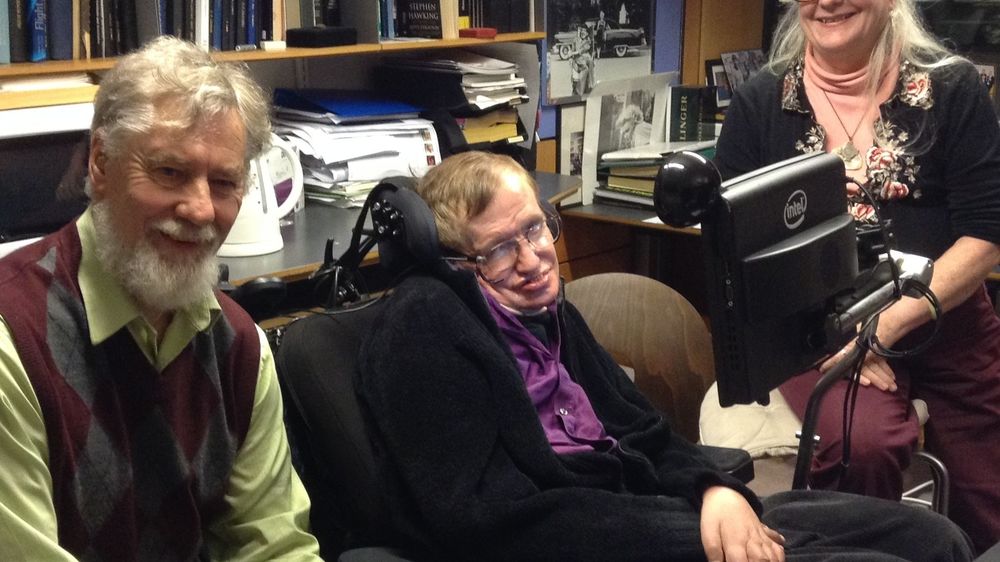 I first met Stephen Hawking during the final experimental part of the entrance exam to University College, Oxford in March 1959. Only students who had done well on the written part took the experimental part.

The experiment involved dropping ball bearings of different diameters down a long glass tube filled with oil, timing them as a function of the distance as they fell. I suppose we then graphed the variables to see if the balls obeyed Stokes’ law. Lots of “professors” came around inundating two of us with questions: myself and a fellow at the next lab table. I later discovered that he was Stephen Hawking.

Berry, Derek Powney and Steve Hawking after the final exams, 1962.

We met again in college in the autumn at the introductory beer-bash for freshmen — we were just two of the four entering University College physics students. During the next three years, we shared many experiences: We became tutorial partners, the two of us meeting weekly with Dr. Robert Berman and later Dr. Patrick Sandars for physics, and with a Dr. G. in New College (his name I forget) for mathematics tutorials.

We were both coxes on the river almost every weekday afternoon for the University College crews; we assembled together most evenings to play bridge or poker (pennies and shillings changed hands, and several bottles of port were consumed), or just went down to the High Street Inn for darts and drinks (where the “prayer books” had handles on them, according to our college staff)

Two points about the tutorials have significance for later events: Berman was a thermodynamics specialist, being the first person to map the interface of diamond and carbon at very low temperatures, leading to the industrial production of synthetic diamonds. Steve and I had to cover every detail of Mark W. Zemansky’s book “Thermodynamics.” This knowledge certainly helped as Steve later developed his thermodynamic interpretation of black holes and his discovery of Hawking radiation — a good example (for physics students) of how learning in one subject area, thermodynamics in this case, can lead to intuition and understanding in a completely different subject area, in this case, cosmology. Personally, I would claim that atomic physics is a similar help in later utilizing quantum mechanics and field theories in multiple areas of physics.

When we began work on general relativity, Steve and the tutor completely left me struggling in the dust. He took to it like a fish (not just like a duck!) to water … and that topic became his life’s work.

A first visit of Steve and myself to Cambridge was as members of the Oxford coxswains’ annual challenge with their Cambridge equivalents; too bad that Cambridge won — Stephen was not so famous at that time so that a Cambridge paper spelled his name as “Hawkong.” Can you imagine an athletic Steve rowing in a race in an “eight” (U.S. translation: “crew”)? He and I infrequently would row on the Isis in a “coxless pair” (we never wanted to be following orders from another cox!). I have always claimed that the only thing I could do better than Steve was to be the University College first eight cox — he coxed the second eight — not a tremendously intellectual endeavor.

Steve and I both took the theory option for the Oxford examination finals in June 1962. Thus, we had just one year of laboratory physics to complete, which we took together as partners. The student labs were open most of every weekday, to complete six separate experiments, essentially one per week. However, since we were both coxing every afternoon on the river, we would complete each experiment in one three-hour morning, and then write it up back in college.

Most students would spend several days in the lab each week, so the graders — physics doctoral students — would be surprised when we came in on Fridays to get our completed experimental reports approved and a pass grade. Admittedly, we did everything very rapidly, and worked hard on estimating the measurement errors, but the graders asked us lots of tricky questions, not quite believing that we had actually made the measurements shown.

We passed! It is also true that neither of us went to many physics lectures during the whole three undergraduate years. The only set that we found valuable was “Quantum Mechanics” by a visiting American professor from Yale — Willis Lamb, of Lamb Shift fame.

The story of Steve falling down stairs one late evening, hitting his head and losing his memory, has been described many times. There followed many hours of questioning with his friends, myself among them, lasting till daylight the following morning. It was the beginning of the subsequent diagnosis of his debilitating illness. Successfully scoring highly on the Mensa test was an early verification that his brain was unharmed. The final diagnosis of ALS took place about 12 months later.

It is important to note that Steve has said he was fairly lonely and bored in his early undergraduate years. However, he was recognized by all of us, his 100 or so peers at University College, as the most intelligent person we had ever met, while the rest of us were “just ordinary people”; and especially after the first year, he joined us in many of the college activities. He was, after all, two years younger than most of us, and we mostly did not have his strongly intellectual family background, which perhaps restrained him initially in all the non-physics adventuring of typical undergraduates.

Regarding the final exam from Oxford, the rest of us knew as soon as we found his name on the “viva” list for a first-class honors degree that he would get his first and go on to his first choice for graduate work, Cambridge, then the mecca for cosmology.

The rest is well-known history, as Steve returned to mathematical physics for his life’s work and taught the whole world his wonderful example of determined success in the face of extreme physical adversity.

As physicists we will be always grateful for his efforts in both developing detailed theories of our universe, driving our understanding of the cosmos forward, and in putting into words his explanations that could be mostly understood by other non-scientists — especially as those explanations, vitally short, were able to excite the imaginations of the general population, making them value the sense that humans can better understand the immensity of the universe, and the place of humans there. He was THE human “supernova of our time.”

We last met about four years ago in Cambridge in his office and at home — it was delightful to find that his sense of humor was undiminished, which was I think a strong force in helping him overcome his heath adversities.

He immediately decided that us four University College physics undergraduates (Derek Powney, Richard Bryan, Steve and myself) should get together again. We began the process but tracking down Powney and Bryan took more time than we had available to us — too bad the meeting never happened. I just close with a photo of our meeting in his office at that time, soon after the release of the 2013 movie “Hawking,” directed by Stephen Finnigan.