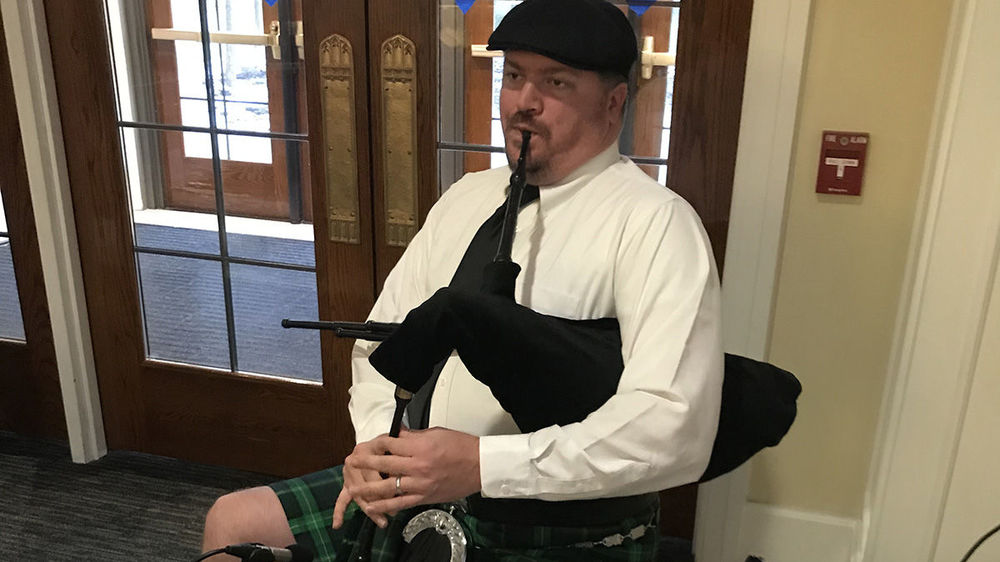 NDWorks caught up with David Younger, associate director of Study Abroad, as he helped kick off Football Friday in the Morris Inn lobby by playing his Scottish smallpipes. Before the weather turned colder, Younger played his regular bagpipes on the Wind Family Fireside Terrace. He’ll be entertaining the Morris Inn crowd again in the lobby this Friday for the last home game. Younger has been playing Football Friday events for the past five years.

“The Morris Inn was looking to have an event that would draw people on a weekly basis during Football Friday events,” he says. “They wanted to pilot my performance at the last game of the 2014 season, which was against the University of Louisville. So I performed only one game that year, but the crowd enjoyed it and so did the staff, so they brought me back each year since. I do see some regular people each week, and the event draws a large crowd every Football Friday!”

He started playing bagpipes about seven years ago when his wife, who was busy working in the evenings, declared, “You need a hobby.” Younger took quickly to learning to play the bagpipes, which was already on his bucket list. He now plays at private events including weddings, funerals, graduation parties, baptisms and tailgates. “I enjoy the thrill of performing live for a crowd of people and seeing how they show up for the music and entertainment.”