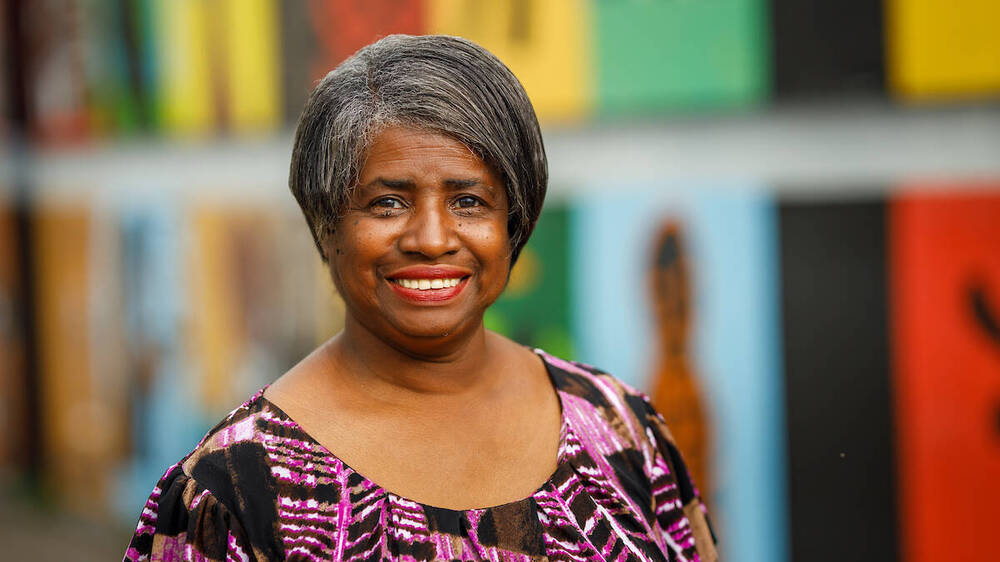 Most of us are familiar with the story of Rosa Parks — the Black woman who, in 1955,  was arrested in Montgomery, Alabama, for refusing to give her seat to a white man on a segregated bus. Her actions gave momentum to the civil rights movement. Activists, including a charismatic young pastor — the Rev. Martin Luther King Jr. — led a year-long boycott of the bus system and, in 1956, the Supreme Court declared Montgomery’s segregation laws on buses to be unconstitutional.

Parks was not in that seat by accident, noted one of her admirers.

“Rosa Parks was a civil rights activist who stood up for justice. She even got fired from a job because of standing up for what she believed in,” said Lu Ella Webster, who works at the Robinson Community Learning Center coordinating programs for senior adults.

Webster can identify with that brand of courage. It’s one of her own attributes.

“I won’t back down if I believe we’re not being treated right. If I believe justice is not being done, I’ll stand up and say something about it,” said Webster, who is Black.

For example, 20 years ago, while working for another employer, Webster spoke up when a white woman was hired for an administrative assistant position. She said the job had not been posted internally and possible internal candidates — four Black women — were not considered.

“I said to my supervisor and director, ‘No, no, no. You violated your own policies and procedures. … My supervisor said, ‘Well, we can choose who we want.’”

Not satisfied, Webster and her colleagues wrote a letter to the attorney representing the company.

“We said, ‘This is what's going on. They have violated their own policies.’ And we showed them the policies and then their question was, ‘What do you want us to do?’ We said, ‘Let the person you hired go and start (the job search) over.”

Webster said that’s what happened, and, ultimately, an internal candidate was promoted to the position.

“Martin Luther King stood up for justice and taught us to stand up and fight for what you believe in. You don’t have to do it with violence, but you can do it through words. If you have a problem with somebody, confront them with that problem,” Webster said.

“As a neighborhood resident and employee of the Robinson Community Learning Center, Lu Ella has had an active role in creating opportunities for children and adults in South Bend. Her passion for the neighborhood and its residents has not only helped transform the physical landscape of the neighborhood, but also positively impacted the lives of numerous people who live there and across our community. We are grateful and indebted for her contributions to our community.” — Gladys Muhammad-Ward, MLK Committee Chairperson

On Monday, Jan. 16 — MLK Jr. Day —  at a public event held in the lobby of the County-City Building in South Bend, the Martin Luther King Jr. Foundation of St. Joseph County honored Webster with the Rosa Parks Award.

Webster could have received the award for any number of her contributions to South Bend, which are grounded in a commitment to social justice and the common good.

“We raised over $250,000 ourselves,” she said of the project — a neighborhood development initiative aimed at involving kids in community change. The project included the perspectives of children at the nearby RCLC.

“The park is across the street from where I’ve lived my whole life,” said Webster, who is 71.

Webster was also at the table when Notre Dame approached the neighborhood with the idea to partner on what, in 2001, would become the Robinson Community Learning Center. As someone who speaks her mind, Webster did then too.

“I was the doubting Thomas. I didn’t believe that Notre Dame was going to do this (establish a neighborhood center) for us, because there hadn’t been a relationship. But Father (Monk) Malloy was determined that we could (do this) together and that’s pretty much how it went. There were meetings and they asked us what we wanted, and the relationship developed and RCLC came to be.”

It’s another example of how Webster uses words and perseverance to make the world a better, more equitable place.